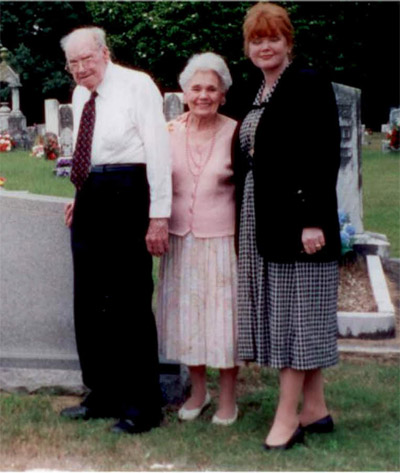 Left to Right: Lewis Earl Bagwell, Lucille (Howell) Bagwell, and JoAnne Claire Bagwell
Photograph courtesy of JoAnne Claire Bagwell
Lucille Helen Howell was born on 21 March 1923 in Blount Springs, Alabama.1,2,3 She married Lewis Earl Bagwell, son of Homer Virgil Bagwell and Pearl Ann Sheppard, on 26 September 1945 at Blount Springs, Alabama.1,2 As of 26 September 1945,her married name was Bagwell. Lucille Helen Howell died on 25 March 2010 in Alabama at age 87 BAGWELL, LUCILLE Lucille Bagwell, 87, of Hoover, AL, passed away on March 25, 2010. She was a member of Shades Mountain Baptist Church for fifty two years. She was also a member of the Daughters of the American Revolution and Daughters of the Confederacy. She was also a long time active member of the Compassionate Friends, a support group for parents who have lost children. She was also on the National Board of Directors for this organization. For twenty- five years she worked as a volunteer for the American Red Cross at the Birmingham VA Hospital. She was preceded in death by her husband, Lewis Bagwell and son, Lew Bagwell. She is survived by her son, Don Bagwell; daughter, Allyson Lynn (Wayne); 2 sisters, Evelyn Sapp and Kathleen Wallace; one brother, Malcolm Howell (Corinne), grandchildren, Jami Lynn and Jason Lynn. Funeral services will be held at Elmwood Chapel on Saturday, March 27 at 1:00. The family will receive friends from 11:30-1:00. Burial will at Elmwood Cemetery.
Published in The Birmingham News on March 26, 2010.3 She was buried at Elmwood Cemetery, Birmingham, Jefferson County, Alabama.3

Burial will be in Roselawn Cemetery. The family will receive friends tonight from 7 to 9 at the funeral home.

Mrs. Roberson died Sunday at her residence. She was born July 7, 1924, in Wayne County, Tenn. She worked as a customer service representative at Compass Bank, formerly Central Bank, before her retirement in the mid-1980s. She was a member of 16th Avenue Baptist Church, the Veterans of Foreign Wars Ladies Auxillary and the Women's International Bowling Congress and she was inducted into the Alabama Women's Bowling Hall of Fame.

She is survived by one son, Phillip Bagwell of Mount Olive; two sisters, Joanne Box of Decatur and Burnice Volpone of Geneva, Ohio; and three grandchildren.

F, b. 12 November 1926, d. 27 December 2017
Alma Jean Gorman was also known as Jean Gorman. She was born on 12 November 1926 in Baileyton, Alabama.1,2 She married Ralph Bagwell, son of Homer Virgil Bagwell and Audie Aquilla Bodine, on 11 December 1948 at Huntsville, Alabama.1,2 As of 11 December 1948,her married name was Bagwell. Alma Jean Gorman died on 27 December 2017 at age 91
Jean Bagwell, 92, of Madison, went home to be with Jesus and her family on Wednesday, December 27, 2017. She was a devoted wife, mother, and Christian.
Survivors include her daughter, Janet B. Weddington; sons, Max D. Bagwell and Bruce E. Bagwell, six grandchildren; three great-grandchildren; and numerous nieces and nephews.
Visitation will be from 12 noon to 1 p.m. Saturday, December 30, at Laughlin Service Funeral Home, with the funeral service immediately following in the chapel. Burial will be in Huntsville Memory Gardens.
Information provided by Laughlin Funeral Home.
She was buried at Huntsville Memory Gardens, Huntsville, Madison County, Alabama.

Max Darrell Bagwell is the son of Ralph Bagwell and Alma Jean Gorman.1,2

He was a lifelong member of Arab First Baptist Church where he served on the building committee. He entered the Army in 1947 and served his Country in the Korean War. He reached the rank of Captain in the Alabama National Guard. He retired as a home builder at the age of 70 and was former chairman of the Arab Sewer Board and a member of the Arab Senior Citizen group.

Preceded in death by his parents, brothers: Lewis, Dewitt, Delmer, J.C., Ralph and Rex Bagwell and a sister: Lottie Witt.3

He was buried at Brookwood Cemetery and Memorial Gardens, Arab, Marshall County, Alabama.3

Mrs. Bagwell was born July 13, 1934 in Marshall County, the Red Hill Community, to Robert W. Warren and Lillian Irene Stephens Warren. She was a 1952 graduate of Marshall County High School. Mrs. Bagwell was a homemaker, she was the manager of the Senior Citizens Center in Arab in the mid 70’s, and loved Alabama Football.

She was a member of Arab First Baptist Church. She was preceded in death by her parents: Robert and Lillian Warren and her husband of 61 years Leno Bagwell.

Funeral service will be 2:00 p.m. Friday September 23, 2016 at Arab Heritage Memorial Chapel. Burial will be in Brookwood Cemetery.3

She was buried at Brookwood Cemetery and Memorial Gardens, Arab, Marshall County, Alabama.3