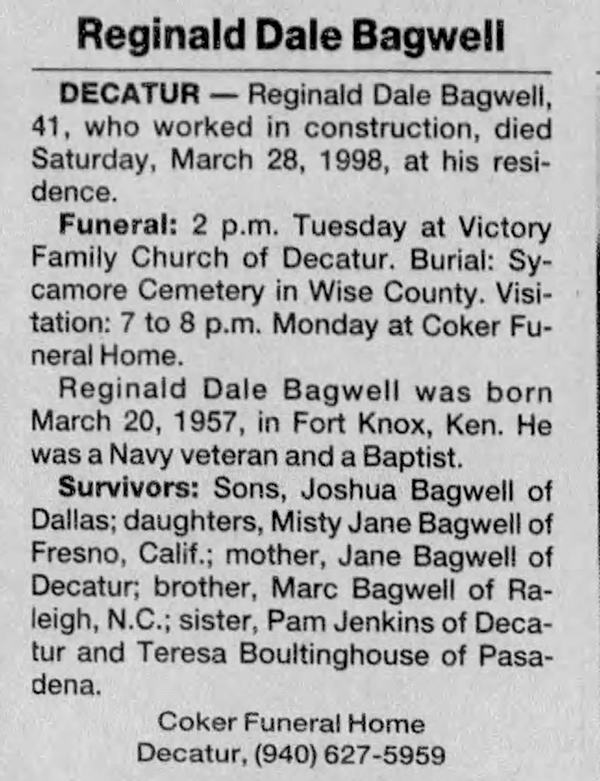 M
Bill Bagwell is the son of Billy Wayne Bagwell and Marilyn Krisle.

M
Derrick Bagwell is the son of Billy Wayne Bagwell and Marilyn Krisle.


Shirley Ann Bagwell of Pauls Valley, Oklahoma, (84) was born to Charlie O. and Allie Aline (Goodman) Evans on March 16, 1936, and entered eternal live on April 22, 2020.
Shirley spent her childhood days on the 800 block of N. Santa Fe Street in Pauls Valley. One day, as she and her girlfriend, Gayle Himes, were walking down the street, Shirley met the love of her life, Bill Bagwell, when he asked if they would like a ride. That meeting eventually led to marriage on April 3, 1953, in Ardmore, Oklahoma. They were accompanied by Gayle Himes and Doyle Bowles, who also were married that day.
After her children became school age, Shirley attended college at East Central University in Ada. She became an LPN in 1966 and was employed at Colonial Nursing Home. She later worked at Pauls Valley General Hospital. During that time, Shirley continued her studies at OCCC and graduated as an RN in 1982.
During most of her time at Pauls Valley General Hospital, Shirley worked in the emergency room. Shirley was an excellent ER Nurse. The years she spent in the ER brought her the greatest satisfaction in nursing. After 17 years at PVGH, she worked in home health, and finally, after a number of years at the Pauls Valley State School, she retired in 1997.
Shirley was a member of the Order of Eastern Star #85, where she served as Worthy Matron in 1980.
She was a member of Beaty Baptist Church where she loved everyone dearly. Shirley is remembered by others for her faithfulness and she was a committed Christian, teaching Sunday School for many years. She dedicated much of her free time to raising funds and awareness for Relay for Life with her church family.
Shirley was known as a great cookie baker and was well known for her Oatmeal Raisin, cookies, Mrs. Pipe's Chocolate Chip Oatmeal Cookies, and her No Bake Fudge Nuggets. She made beautiful decorated cakes, crocheted, embroidered, and enjoyed sewing, doing crafts, and ceramics.
She loved spending time on her patio or sitting under the carport just enjoying the fresh country air. Her life was dedicated to teaching her children the importance of holding family close.
She is preceded in death by her husband, Bill Bagwell; her parents; two brothers, Dale Evans and Tommy Evans; and most recently, a loving cousin, Linda Scroggins.
Those left to cherish her memory are a son and daughter-in-law, Travis and Sherry Bagwell; daughter and son-in-law, Lori and Rick Terry; daughter, Ann-Jenine Jones; daughter and son-in-law, Dana and Robert Crum; grandchildren Dale Sorrels, Brian and Terenda Bagwell, Benjamin and Ashley Sorrels, Gregory and Ashley Terry, Forrest and Angie Johnson, Andrew Terry, and Evan Sorrels, and a beautiful and 'favorite' granddaughter, Meagan Bagwell and Matt McCreary, along with several great-grandchildren.
She is also survived by sisters Bettye Rosenlieb, Gwen Cook, Ed and Nobuko Evans and their families.
In lieu of flowers, the family suggests donations to Samaritans of Pauls Valley and Relay For Life.

M, b. circa 1885
John Wesley Bishop was born circa 1885 in Tennessee. He married Elizabeth Sherell Bagwell, daughter of James K. Polk Bagwell and Elizabeth "Bettie" A. Dickie, on 12 November 1914 at Chester County, Tennessee.