Her married name was Farris. Nancy Bagwell was born circa 1806. She was the daughter of Thomas Bagwell and Sarah Privitt. Nancy Bagwell married William Farris.

Sarah Bagwell was born circa 1810 in North Carolina. She was the daughter of Thomas Bagwell and Sarah Privitt. As of 1830,her married name was Gitgood. Sarah Bagwell married Alexander Gitgood in 1830.

William D. Bagwell was born in 1835. He was the son of Jonathon Bagwell and Polly Brown.

Nancy E. Bagwell was born in 1837. She was the daughter of Jonathon Bagwell and Polly Brown.

Lucy A. Bagwell was born in 1839. She was the daughter of Jonathon Bagwell and Polly Brown.

Susan M. Bagwell was born in 1843. She was the daughter of Jonathon Bagwell and Polly Brown.

Mary E. Bagwell was born in 1850. She was the daughter of Jonathon Bagwell and Polly Brown.

F, b. 29 May 1816, d. 29 April 1901
Rebecca Bagwell was born on 29 May 1816 in South Carolina. She was the daughter of John Littleton Bagwell and Rebecca "Sally" McAbee.1 As of 24 December 1833,her married name was Brantley. Rebecca Bagwell married Larkin Newby Brantley on 24 December 1833 at Jefferson County, Alabama. Rebecca Bagwell died on 29 April 1901 in Hot Springs, Garland County, Arkansas, at age 84. She was buried at Fourche Loupe Cemetery, Hot Springs, Garland County, Arkansas.

F, b. circa 1830
Elizabeth Bagwell was born circa 1830.1 She was the daughter of John Littleton Bagwell and Rebecca "Sally" McAbee.1 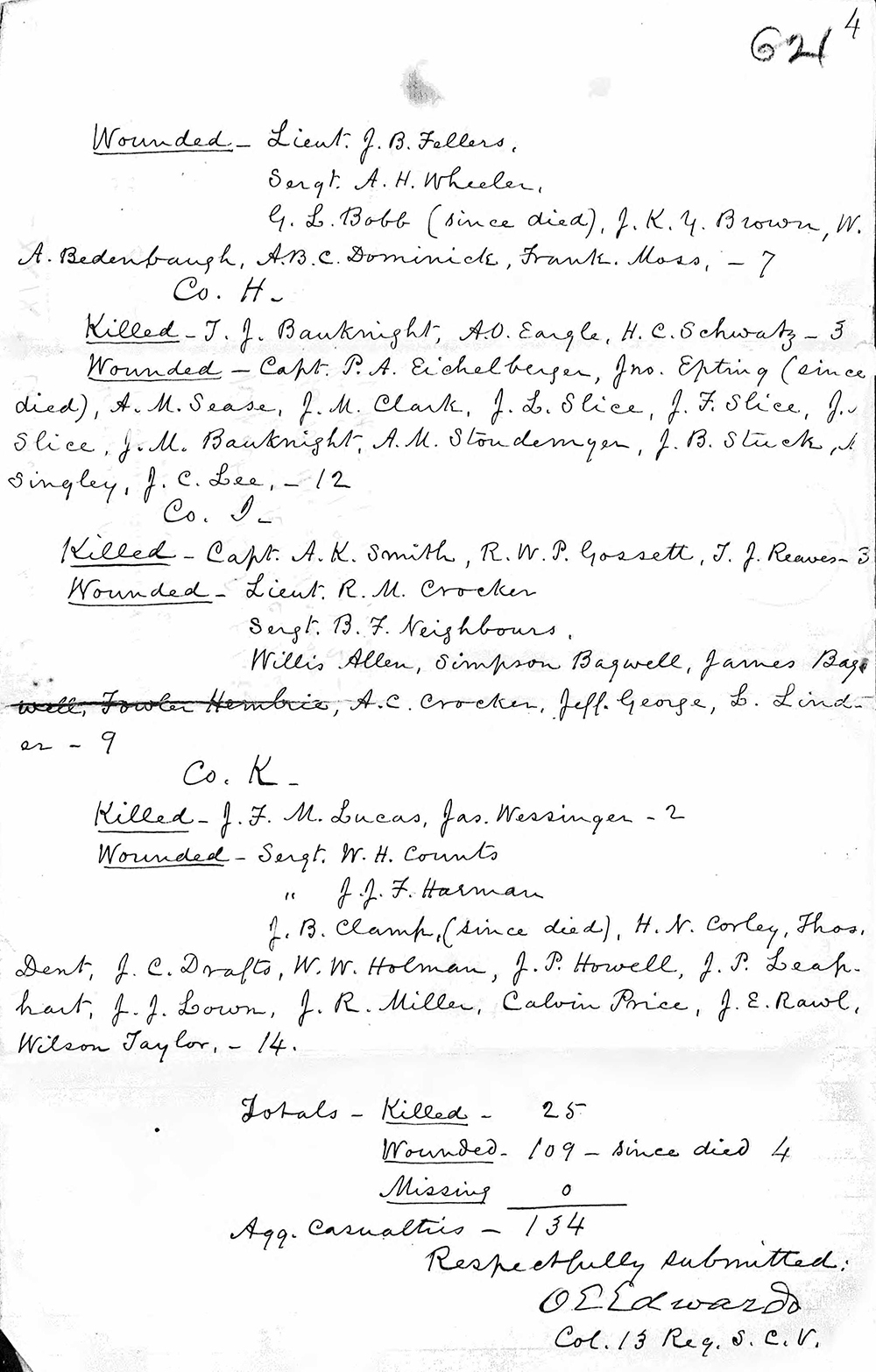 He was wounded severely at 2nd Manassas which as fought on August 28–30, 1862 in Prince William County, Virginia.

He fought and was wounded again at the Battle of Gettysburg (Gettysburg, Pennsylvannia). Simpson Bagwell died between 1866 and 1868.

The 13th Regiment of South Carolina Volunteers was formed
in the summer of 1861. The Regiment was the brain child of Oliver Evans Edwards
who was born in Spartanburg District on November 9, 1819. In response to a call
from President Jefferson Davis about the 1st of July 1861,
a large number of infantry companies were formed across South Carolina.
Oliver E. Edwards had fought in the First Battle of Manassas.

Answering the call of President Davis, Oliver E. Edwards returned to his home county
of Spartanburg, South Carolina and with the help of others organized five companies
which would later become part of the 13th Regiment of South Carolina Volunteers.

Companies B, C, E, F, and I were all organized
of Spartanburg County, South Carolina Volunteers.

The men of the above companies left their home counties in August of 1861
and went to a camp of instruction at Lightwood Knot Springs,
about 5 miles from Columbia, South Carolina, where the various companies
were organized into regiments. Here, the 13th was formed and elected its field-officers:

Colonel O.E. Edwards, Lieutenant Colonel P.L. Calhoun,
and Major T. Stobo Farrow. After about three months of instruction
at Lightwood Knot Springs, the 13th was ordered to the southern coast
of South Carolina, near Pocotaglio, where it was brigaded
with the 12th and 14th regiments. The 13th was present
at the well known bombardment of Hilton Head by the Federal fleet.
On the evacuation of the position there, the regiment was successfully withdrawn,
after some very muddy wading to the mainland.

It was next stationed near Green Pond, near the line of Colleton and Beaufort counties. At this time, the 13th, along with the 12th and 14th regiments, were formed into a brigade under the command of Brig. General Maxey Gregg. The brigade remained on the coast of South Carolina until April of 1862 when it was ordered to Virginia.
Its first camp in Virginia was around Milford Station, on the Richmond and Fredericksburg railroad.

As stated, the 13th Regiment was originally part of Gregg's Brigade.
After arriving in Virginia, Gregg's Brigade was composed of five South Carolina regiments, to wit: 13th regiment, 12th regiment, 14th regiment, 1st regiment and Orr's regiment of rifles.
These five regiments would remain together for the duration of the war as a brigade. Gregg's Brigade eventually became McGowan's Brigade and was a part of A.P. Hill's Division and became part of General Stonewall Jackson's Corp.

After Jackson's death at Chancellorsville, the brigade was made a part of the Third Corp. As a result of a wound received at Chancellorsville,
Colonel O.E. Edwards also died. The 13th then was led by Benjamin T. Brockman,
also of Spartanburg County. Brockman was promoted to Colonel and he also died of wounds he received at "bloody bend" at the Battle of Spottsylvania Courthouse on May 12, 1864.

After Brockman's death, the regiment for the first time was led by someone
other than a Spartanburg County native. Captain Isaac F. Hunt of Company D of Newberry County was made the commander of the 13th and promoted to Colonel.

The 13th Regiment remained a part of the Army of Northern Virginia until the conclusion of the war.

The 13th Regiment was present at the surrender at Appomattox Courthouse
on April 9, 1865. Captain John Wilson Carlisle of Company C later recalled
General Custer of the Federal Army passing in front of the 13th waving a white flag as it was getting ready to go into engagement.

Of the 13th Regiment, 220 men were killed in battle or died of wounds.
262 died of disease and 678 men received wounds in combat.

Battles of the 13th Regiment: 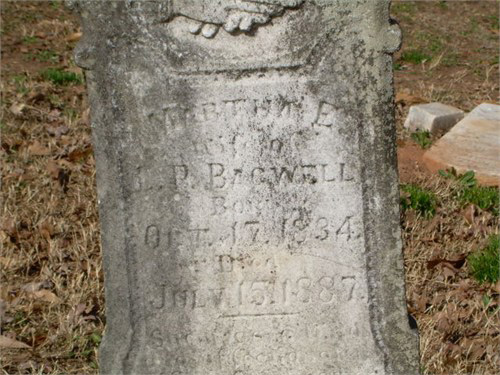 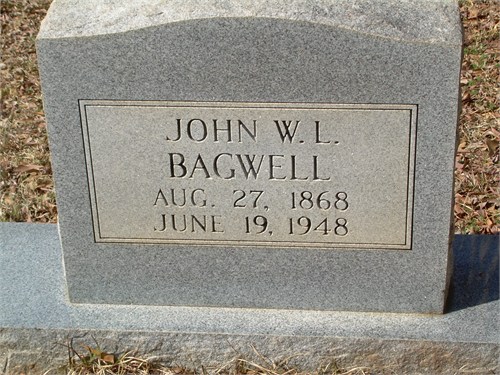 BAGWELL, JOHN WILLIAM LITTLETON 79,Clifto n, h/o Amanda Bagwell, 6–20–48 p. A7 John W. L. Bagwell John William Littleton Bagwell, 79, of Clifton No. 1 died in a local hospital at 1 Saturday morning following a lingering illness.
Mr. Bagwell was a life-long resident of Spartanburg county and was a member of the Redmen and the Odd Fellows. He was a son of the late Mr. and Mrs. William L. Bagwell.
Surviving are his wife, Mrs. Amanda Bagwell of Clifton No. 1: 3 daughters, Mrs. Eula Mae Quinn of Spartanburg Route 6, Mrs. Corrine Hudgins of Fletcher, N. C. and Mrs. Evie Poteat of Cowpens Route 1: 4 stepdaughters, Mrs. Dessie Postell of Minter Bluff, Ga., Mrs. Corrie Crews of Concord, N. C., Mrs. DeLois Dillard of Gargtha, Va., and Mrs. Mae Spurlock of Ware Shoals: 3 sons, J. D. of Route 6, H. L. of Woodruff and Grady L., with the U. S. Army: one stepson, Roy Painter of Clifton: one sister, Mrs. Laura Wright of Clifton; 23 grandchildren and 2 great grandchildren.
Funeral services will be held this afternoon at 4 at Clifton Baptist Church, conducted by the Rev. C. H. Simms, the Rev. B. C. Morgan, the Rev. Mr. Kendrick and the Rev. Vernon Bishop. Interment will be in Glendale Cemetery.
Active pallbearers will be: A. J. and Joe Davis, Roy McAbee, Harold Seay, Marshall Webb and Vonally Brannon.
Members of the Bible Class of Clifton Baptist Church will form the honorary escort.
The J. F. Floyd Mortuary is in charge of the arrangements.1,2

He was buried on 20 June 1948 at Glendale, Spartanburg County, South Carolina.1,2