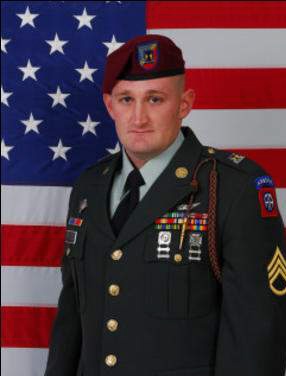 
He was serving with Comany B, 3D Battalion, 82nd Division, Aviation Brigade - stationed at Fort Bragg, NC and serving in Afghanistan.1 Staff Sgt. Charlie Lane Bagwell died on 30 May 2007 in Upper Sangin Valley, Helmand Province, Afghanistan, at age 28.1,2 He was buried on 12 September 2008 at Arlington National Cemetery, Arlington, Virginia.1

F, b. 1865
Catherine Bagwell was born in 1865. She was the daughter of John Christopher Bagwell and Mary Adeline Cisson.

F, b. December 1894
Altontine Bagwell was born in December 1894 in Georgia. She was the daughter of John Minor Bagwell and Olla Josephine 'Josie' Barrett.

M, b. 21 February 1898, d. 22 December 1969
Carl Dewey Bagwell Sr. was born on 21 February 1898 in Gainesville, Hall County, Georgia.1 He was the son of John Minor Bagwell and Olla Josephine 'Josie' Barrett. Carl Dewey Bagwell Sr. married Irene Broma Sockwell before 1920. Carl Dewey Bagwell Sr. died on 22 December 1969 in Decatur, DeKalb County, Georgia, at age 71
Carl Dewey Bagwell, Sr. was born in Hall County, Gainesville, Georgia on February 21, 1898. His wife, Irene, always teased him that he was one day older than George Washington. He was a tall man, 6' 3", and was nicknamed "Biggy" from the shortening of his nickname, Big Boy, bestowed by his wife, Irene. The grandchildren converted it to "Biggy". He worked for many years for Gulf Oil Company, retiring after working over three decades for the company. He was a graduate of Georgia Tech.1
He was buried at Resthaven Cemetery, Decatur, DeKalb County, Georgia.1

F, b. 8 March 1898, d. 9 June 1965
Irene Broma Sockwell was also known as Broma Irene Sockwell. She was born on 8 March 1898 in Georgia.1 As of before 1920,her married name was Bagwell. She married Carl Dewey Bagwell Sr., son of John Minor Bagwell and Olla Josephine 'Josie' Barrett, before 1920. Irene Broma Sockwell died on 9 June 1965 in Atlanta, DeKalb County, Georgia, at age 67.1 She was buried at Resthaven Cemetery, Decatur, DeKalb County, Georgia.1

Vice President of Bagwell Preserving Company and living at 222 Wilsonia(?) Drive in Nashville, he was 40 years old and married when he died at home of pancreatic cancer on February 14, 1954. Burial was the next day in Woodlawn Cemetery, Nashville.

Much of the above is from his Death Certificate, with Jean Stephens as the informant.1

NOEL, Andromedia Bagwell Age 90 of Nashville, passed away on January 5, 2011. Born in Smyrna, TN to the late Nathanial Luther Bagwell, Sr. and Lillie Moore Bagwell, she was preceded in death by her husband of 64 years, John Hopkins Noel, Jr. Known for her caring spirit, she had an extraordinary zeal and passion for life. She was a people person. A graduate of Hume Fogg High School, she graduated from Vanderbilt University in the class of 1941. A former Miss Vanderbilt and a member of Alpha Omicron Pi Sorority, she was the first woman to serve as captain of the Vanderbilt Cheerleaders. After marrying Mr. Noel in 1941, she was proud to serve as a Grey Lady during World War II while her husband was held as a prisoner of war in Germany for two years. An accomplished woman with a positive nature, she loved spending time with her friends and family, as well as serving the community in many ways, including the Executive Committee of the Junior League of Nashville, and the Executive Boards of the Crippled Childrens' Home and the West End Home for Ladies. She was a member of the James K. Polk Society, the Hermitage Association, the Vanderbilt Aid Society, Cheekwood, Belle Meade Country Club and the Centennial Club. She especially enjoyed being a member of the Charlotte-Minnie Pearl Tennis group for many years. First and foremost, Andromedia was a faithful and devoted member of the First Presbyterian Church in Nashville, and cherished her work with the Women of the Church, and being closely involved with other members of the congregation. One of six children, each of whom preceded her in death, her two sisters were Sara Bagwell Angel and Mary Bagwell Rice, and her three brothers were Nathanial Luther Bagwell, Jr., Walter Moore Bagwell and Edward Bentley Bagwell. Andromedia is survived by her three sons, John Hopkins Noel III (Melinda Welton), Lee Francis Noel (Emily) and Arthur Bagwell Noel. She also leaves behind six grandchildren, John Edward Noel, Atlanta, GA, Andrew Dunn Noel (Dixie), Portland, OR, Andrea Christina Noel, Sarasota, FL, Lois Emily Noel, Brittany Jade Noel, Tallahassee, FL, Lee Francis Noel, Jr; and one great- grandchild, Milo Edward Noel, Portland, OR. Her family extends their deepest gratitude and thanks to Dr. Karl VanDevender and Dr. Byron Haitas, as well as the residential and health care staffs at Richland Place for the love and care they gave to her. The family is planning a visitation on Monday, January 10th from 10 a.m. - 12 Noon, in Courtenay Hall of First Presbyterian Church, 4815 Franklin Road in Nashville. A Memorial service will immediately follow in the church sanctuary. The Reverend Todd Jones will officiate.

Joe Arthur Bagwell, born December 24, 1936, entered into rest with our loving Lord on August 15, 2015. Joe was born to Mary Bertie Lee and Frank J. Bagwell in Chelan, WA. He grew up ranching with three sisters: Vera, Jane and Shirley.
Joe graduated from Chelan High School in 1956 and served with the U.S. Air
Force for four years before working with Wen Air Alaska and the Boeing Company. Joe met his wife, Cynthia, while stationed at McCord Air Force Base in Tacoma, WA. Together, they had three boys: Brian, Allen and Glen. Joe was a functional test electrician, where he would initiate “power on” to completed Boeing 737’s. Joe retired from Boeing and resided in the Wenatchee Valley. In retirement, Joe enjoyed his family, friends, eating out for breakfast and coffee, metal detecting, fishing and watching the Atlanta Braves.

M
Brian Bagwell is the son of Joe Arthur Bagwell and Cynthia (?)

M
Glen Bagwell is the son of Joe Arthur Bagwell and Cynthia (?)