Healy Parker Bagwell was born on 25 November 1823 in Accomack County, Virginia.3,1,2,4 He was the son of Healy Drummond Bagwell and Elizabeth Parker Bloxom.3,2 Healy Parker Bagwell married Sarah Ann Edmunds, daughter of Thomas Edmunds and Ann (?), on 24 October 1843.5,1,2 I beleive that Healy Parker Bagwell served in the 39th Regiment, Company D as a First Lieutenant in the Virginia Infantry for the Confederate Army during the Civil War.

39th Infantry Regiment was organized during the summer of 1861 with eleven companies: eight infantry, two cavalry, and one artillery. The unit was attached to the Department of Norfolk and served on the eastern shore of Virginia. In November it was ordered to evacuate the peninsula but was unable to cross the Chesapeake Bay. Efforts failed to reorganize the regiment, and it disbanded on February 3, 1862. Its commanders were Colonel Charles Smith, Lieutenant Colonel Louis C.H. Finney, and Major N.R. Cary. He and Sarah Ann Edmunds lived in 1870 in New York, New York County, New York. Healy Parker Bagwell and Sarah Ann Edmunds lived in 1880 in Franktown, Northampton County, Virginia.2 Healy Parker Bagwell died on 29 November 1882 in Northampton County, Virginia, at age 59 Bagwell, Healy P. - Died; 29 Nov 1882 - Peninsula Enterprise (Accomac Court House) 7 Dec 1882.3,4 He was buried at Bagwell Graveyard, Willis Wharf, Northampton County, Virginia.3,4 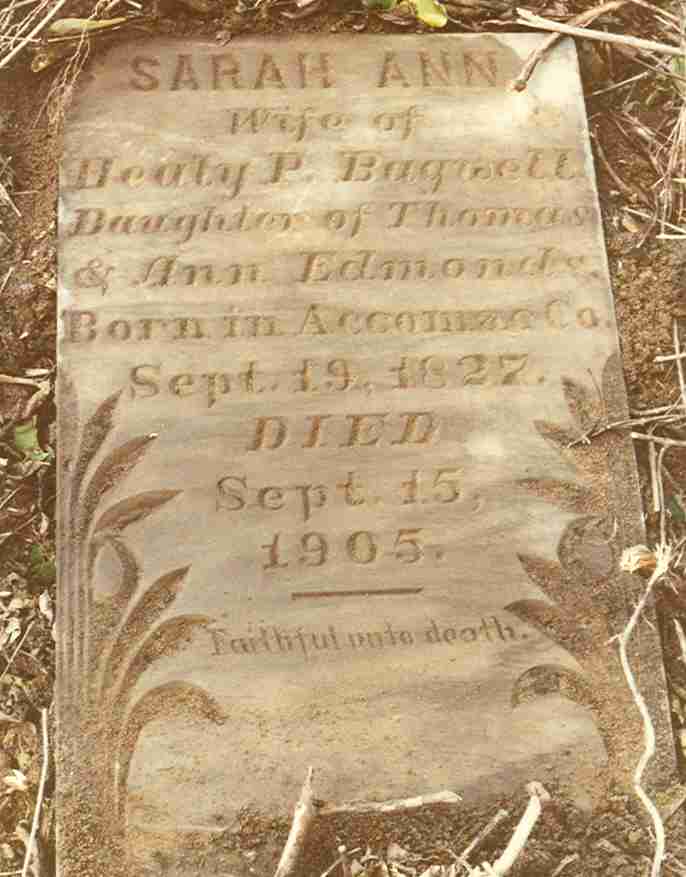 Child of Thomas Edmunds and Ann (?)

Child of Ann (?) and Thomas Edmunds

Children of David Bagwell and (?) Ann

Children of (?) Ann and David Bagwell

Henry Bagwell was born in 1589 in St. Petrock, Exeter, Devonshire, England.1,3 He was the son of David Bagwell and Joanna Chappelle.1,2 Henry Bagwell was christened on 29 October 1589 at St. Petrock, Exeter, Devonshire, England.1,2
On 2 June 1609, Henry left from Plymouth, England on a ship named the Sea Venture. The Sea Venture was the flagship of the seven-ship fleet being sent by the Virginia Company to relieve the starving colony of Jamestown. He was probably 20 years old at the time. The ship was under the command of Sir George Somers and carried about 150 people. On the 25 July, the fleet ran into a strong storm, likely a hurricane, and the ships were separated. The Sea Venture fought the storm for three days. Comparably-sized ships had survived such weather, but the Sea Venture had a critical flaw in her newness, as her timbers had not set. The caulking was forced from between them, and the ship began to leak rapidly. All hands were applied to bailing, but the water continued to rise in the hold. The ship's guns were reportedly jettisoned (though two were salvaged from the wreck in 1612) to raise her buoyancy, but this only delayed the inevitable. The Admiral of the Company, Sir George Somers himself, was at the helm through the storm. When he spied land on the morning of 28 July, the water in the hold had risen to nine feet, and crew and passengers had been driven past the point of exhaustion.

On Juy 28, 1609, the ship was wrecked on Bermuda. The survivors built two smaller ships from the remains of the large ship, The "Deliverance" and the "Patience", which the set sail for Jamestown. They arrived in 1610 and Henry was aboard the "Deliverance".

Somers deliberately drove the ship onto the reefs of what proved to be Bermuda in order to prevent its foundering. This allowed all 150 people, and one dog, aboard to be landed safely ashore. The survivors came ashore at Discovery Bay. Somers, along with all those others who had survived the wreck of the Sea Venture, was presumed dead by those who continued on to Virginia, but instead, remained in Bermuda for 10 months. Some commentators believe that this incident was one of the inspirations for William Shakespeare’s play The Tempest.

During their time on the islands, the crew and passengers formed the start of the Bermuda colony, building a church and houses. Somers and Sir Thomas Gates (also among the castaways) between them oversaw the construction of two ships, the Deliverance and the Patience, from spars and rigging of the wrecked Sea Venture and local timber (Bermuda Cedar).

In May 1610 the ships set sail, with 142 castaways on board. On arrival, they found the Virginia Colony almost destroyed by famine and disease during what has become known as the "Starving Time". Very few of the supplies from the Supply Relief Fleet had arrived (the same hurricane which caught the Sea Venture had also badly affected the rest of the fleet), and only 60 settlers remained alive. It was only through the arrival of the two small ships from Bermuda, and the arrival of another relief fleet commanded by Lord Delaware in July of 1610 that the abandonment of Jamestown was avoided and the colony was able to survive.3

He lived before 14 April 1623 in Corporation of Charles City, Virginia.2 He was still living in Jamestown in 1624, but shortly thereafter, he moved to the Eastern Shore [of Virginia], where he had been granted land on Old Plantation Creek. He was a Burgess from Accomack in 1629 and 1632. He was the first clerk of the Court of Accomack Plantation, serving from 1632 until July 3, 1635 when he was sworn in as sheriff.3 He married Alice Hawkins circa 1637 at Northampton County, Virginia.1 Henry Bagwell died on 2 November 1659 in Northampton County, Virginia.1

Children of Thomas Bagwell I and Anne Stockley

Children of Anne Stockley and Thomas Bagwell I

Betty Leatherbury was born circa 1771 in Northampton County, Virginia.1 She was the daughter of Perry Leatherbury and Agnes Roberts.1

Children of Edmund Leatherbury and (?) Peggy

Children of (?) Peggy and Edmund Leatherbury