F, b. 28 November 1932, d. 24 May 2016
Mary Ellen Winslett was born on 28 November 1932 in Pickens County, South Carolina.1 Her married name was Bagwell. She married Bobby Joe Bagwell, son of Ora Bruce Bagwell and Lillie Maude Owens, after 1945. Mary Ellen Winslett died on 24 May 2016 in Easley, Pickens County, South Carolina, at age 83
Mary Ellen Winslett Bagwell, lifelong resident of Easley, born on November 29, 1932, was the daughter of the late Horace Winslett and Katherine Ballentine Winslett. She passed away at home on May 24, 2016 after a long and valiant battle with lung cancer.

Born in Pickens County, he was a son of the late Bruce Bagwell and Maude Owens Bagwell. Mr. Bagwell was a graduate of Clemson University with a B.S. Degree, graduate of Executive Development of USC, he was formally a Vice President of Kent Manufacturing in Pickens, former member of the board of Pickens County Country Club, member of Easley Lions Club, 30 year member of Easley First United Methodist Church and currently a member of Main Street United Methodist Church in Greenwood.

A brother, Bobby Bagwell predeceased him.

A memorial service will be held at 3:00 p.m. Tuesday, November 28, 2006, at Easley First United Methodist Church with the Reverend Jim Corell officiating.

A reception will follow at the church fellowship hall.

The family is at the home of Larry Bagwell, 505 Laurel Road, Easley, SC.

In lieu of flowers memorials may be made to Hospice of South Carolina, 600 E. Washington Street, Suite 614, Greenville, SC 29601 or the charity of one’s choice.

Online condolences may be made by visiting www.dillardfunerals.com

Dillard Funeral Home of Pickens is assisting the Bagwell family.

Mary Elizabeth ("Mollie") Bagwell was born in July 1876 in Dale County, Alabama. She was the daughter of Private Curtis G. H. Bagwell and Martha Ann Stevens.

Cletus Bagwell was born in January 1889 in Alabama. He was the son of Private Curtis G. H. Bagwell and Martha Ann Stevens.

Child of Wiley Stevens and Mary (?)

Child of Mary (?) and Wiley Stevens 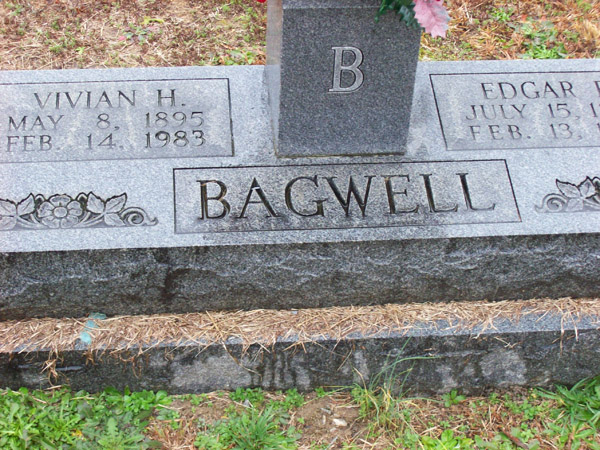