Venice Bagwell was born on 15 December 1907 in Alabama.1 She was the daughter of George G. Bagwell and Venezuela Manasco. Venice Bagwell died on 21 January 1972 at age 64.1 She was buried at Manasco Cemetery, Townley, Walker County, Alabama.1

A. B. Bagwell was born on 6 June 1924 in Alabama.1 He was the son of Henry Walter Bagwell and Isabella Sprinkle. He served in the US Navy during World War II.1 A. B. Bagwell married Mary Sue Tidwell after 1950.1 A. B. Bagwell died on 24 March 1999 at age 74.1 He was buried at Tidwell Chapel Cemetery, Fayette County, Alabama.1

Maudine Bagwell was born on 6 February 1928 in Alabama.1 She was the daughter of Henry Walter Bagwell and Isabella Sprinkle. As of after 1950,her married name was Beasley. Maudine Bagwell married Grady O'Rell Beasley after 1950. Maudine Bagwell died on 29 August 2015 in Jasper, Walker County, Alabama, at age 87

Visitation will be held Wednesday, 2 Sep 2015, from 10 until 11 am at Kilgore-Green Funeral Home. Funeral services will immediately follow visitation at 11 am in the funeral home chapel, with burial at Boshell Cemetary in Townley. Lisa Aaron, Ken Bishop and Dan Pezet will officiate.

She is survived by her son, one sister, one great granddaughter; two great grandsons; one stepson, several nieces, nephews, and other relatives; and a host of friends.1
She was buried at Boshell Cemetery, Townley, Walker County, Alabama.1

Bobby Eugene Bagwell was born on 6 March 1935 in Alabama.1 He was the son of Henry Walter Bagwell and Isabella Sprinkle. He served in the US Army during the Korean War. Bobby Eugene Bagwell died on 28 May 1977 in Plant City, Hillsborough County, Florida, at age 42.1 He was buried at Pleasant Grove Cemetery, Fayette County, Alabama.1

Juanita Sue “Sally” Bagwell was born on 4 January 1938 in Carbon Hill, Walker County, Alabama.1 She was the daughter of Henry Walter Bagwell and Isabella Sprinkle. Juanita Sue “Sally” Bagwell died on 26 December 2019 in Jasper, Walker County, Alabama, at age 81
Juanita Sue “Sally” Bagwell, 81, of Jasper, passed away Thursday, December 26, 2019, at Ridgeview Health Services. Family will receive friends Sunday, December 29, 2019, from 1 p.m. until 2 p.m. Service will follow at 2 p.m. at Kilgore-Green Funeral Home. Burial will be at Boshell Cemetery in Townley. Rev. Lisa Arron will officiate. She was preceded in death by her parents, Henrey Walter Bagwell and Isabella Sprinkle Bagwell; brothers, Cecil Bagwell, Ruble Bagwell, AB Bagwell, Cleophus Bagwell, and Bobby Bagwell; sisters, Maudine Beasley, Lucille Bagwell, Dimple Helms, and Mary Catherine “Kitty” Sloas. Sally was born in Carbon Hill, AL. to Walter and Belle Bagwell. She loved people, small children and adult alike. She loved to sing. She would sing to the people at her church, families, and care takers at Ridgeview. If you ever met her you would remember her. She loved to talk and tell stories.1
She was buried at Boshell Cemetery, Townley, Walker County, Alabama.1 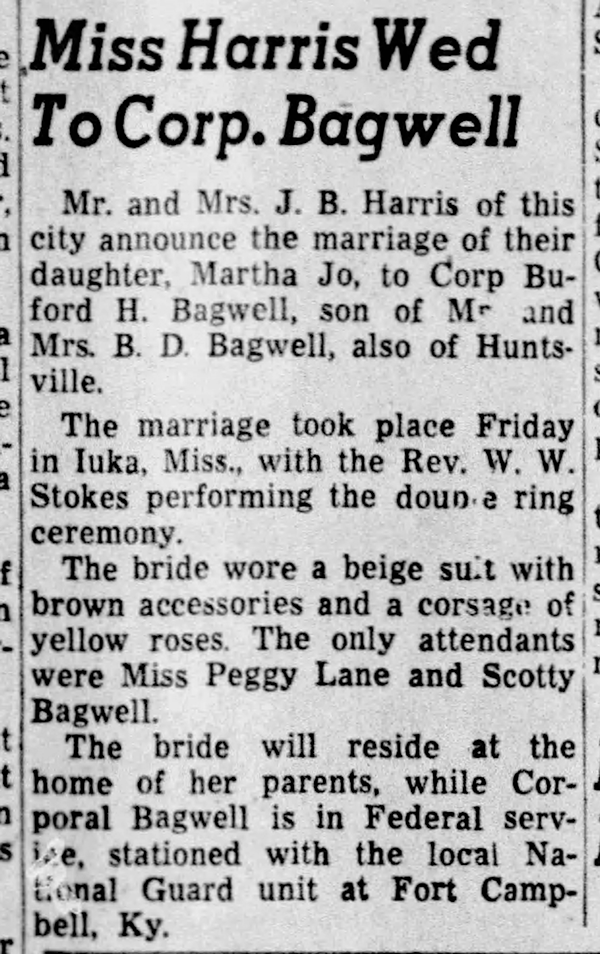 
Bonnie Bagwell, 67, of Huntsville passed away Saturday, February 12, 2022 surrounded by her loving family. Bonnie was born in Anniston, AL to George and Melba Baker. She was a loving wife and mother but her favorite pastime was spending time with her grandchildren. She also enjoyed decorating houses. Survivors include her husband, Wayne Bagwell; children, Jason Bagwell, David Bagwell and Claire Bagwell (Chase Blackwell); grandchildren, Liliana Blackwell and Lauralai Blackwell; and brother, John Baker (Betty). She was preceded in death by her parents and sister, Anita Reed. Visitation will be from 12:00 p.m. – 1:00 p.m. Tuesday at Whitesburg Baptist Church South Campus. The funeral service will follow at 1:00 p.m. with Dr. Jimmy Jackson officiating. Burial will be in Shady Grove Baptist Church Cemetery, Leesburg, AL.
Published by The Huntsville Times from Feb. 20 to Feb. 23, 2022.


She was buried on 15 February 2022 at Shady Grove Baptist Church Cemetery, Leesburg, Alabama.

M
David Bagwell is the son of Buford Wayne Bagwell and Bonnie Baker.

M, b. 25 August 1989, d. 22 September 2012
Joseph Malcolm Bagwell was born on 25 August 1989 in Huntsville, Madison County, Alabama. He was the son of Joseph Dillard Bagwell and Jennifer T. Tarkington. Joseph Malcolm Bagwell died on 22 September 2012 in Auburn, Lee County, Alabama, at age 23
Joseph Malcom Bagwell, age 23, of Huntsville, AL, went home to be with his Lord and Savior, Jesus Christ, Saturday Sept. 22, 2012, from his earthly home in Auburn, AL.
Joseph is survived by his mother, Jennifer Tarkington and her husband, Bernd Billmayer of Huntsville; his father, Joe D. Bagwell of Huntsville; his maternal grandparents, Malcolm and Betsy Tarkington and Hedy Billmayer; and his brother and sister, Justin and Becky Billmayer, all of Huntsville. He is also survived by numerous aunts, uncles, and close cousins, as well as the entire Auburn University family and coaching staff.
He was preceded in death by his paternal grandparents, Buford and Martha Bagwell.
Joseph was a student at Auburn University and was on the coaching staff for the Auburn Football Special Teams and Offensive Line, serving as an assistant student coach. He was majoring in Health Promotion and would have received his B.S. degree in 2013.
Joseph was born without a right ventricle and had open heart surgery in 1992 at the age of three. Dr. Albert Pacifico performed that successful surgery at UAB. Dr. Paul Israel of Huntsville managed his heart condition over the next 15 years; and Dr. Edward Colvin of UAB Pediatric Cardiac Center provided care for Joseph for the last several years. The family gives special thanks to all the caregivers throughout Joseph's life.
Joseph faced heart problems his entire life but overcame great obstacles and ultimately fulfilled his dream of being involved with Auburn Football, not as a player, but as a manager, and then finally as a member of the coaching staff that he so greatly admired. Joseph fought his final battle on Saturday, when he succumbed to a massive heart attack just hours before the Auburn game.
Visitation with the family will be on Wednesday, September 26, 2012 from 11:00 until 1:30 PM at Trinity United Methodist Church on Airport Road in Huntsville. The funeral service will be held at Trinity United Methodist Church at 2:00 PM with Jim Brinkerhoff, with Auburn Church of Christ, and Chette Williams, chaplain for the Auburn football team, officiating. Burial will follow at Maple Hill Cemetery.
Pallbearers will be Darron Barry, Jacob Hawk, Matt Bell, Joshua Hastings, Dedrick Lamar Ford, and Joe Louis Fleming. Honorary pallbearers will be Chris Parrish, Jeremy Hastings, Joshua Bagwell, and Jordan Bagwell.
For many years Joseph's mother, Jennifer Tarkington, has raised funds in support of Huntsville Hospital's pediatric cardiac patients, helping to provide lifesaving equipment for local children in need.
In 2007 Jennifer and Company Photography started "Clicking for a Cause" because Jennifer and Joseph felt that this was their way of giving back to their community.
In lieu of flowers, the family requests that gifts in memory of Joseph Malcom Bagwell be made to the "Clicking for a Cause" fund at Huntsville Hospital Foundation, 101 Sivley Road, Huntsville, AL 35801.
The family also requests that in celebration of Joseph's life, family and friends wear the colors of Auburn University (orange and blue), which were his favorite colors, to the funeral service. "AU - Family ALL IN."

2 Corinthians 12:10 – "That is why, for Christ's sake, I delight in weaknesses, in insults, in hardships, in persecutions, in difficulties. For when I am weak, then I am strong."