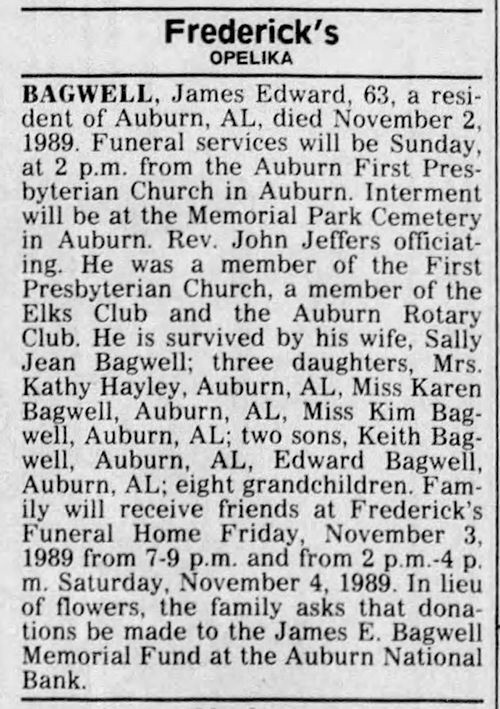 M, b. December 1876
Luke Jarmon was born in December 1876 in Georgia. He married Mary Ophelia Bagwell, daughter of James R. Bagwell and Sarah A. Nease, on 26 August 1894 at Paulding County, Georgia.

Debra Bagwell was born on 29 August 1926. She was the daughter of Bryant Bruce Bagwell and Adalee Hunt. Debra Bagwell died on 11 April 1933 at age 6. She was buried at Crossroads Baptist Church Cemetery, Dallas, Paulding County, Georgia.

Eliose M. Bagwell was born on 2 July 1911 in Georgia. She was the daughter of Alfred Columbus Bagwell and Sarah Ann Rebecca Simpson. Eliose M. Bagwell died on 21 June 1931 at age 19. She was buried at Bethel Cemetery, Haralson County, Georgia.

He served as a deacon of the Bremen First Baptist Church until his move to the Flint area in 2006. Mr. Bagwell was a retired Chief Petty Officer in the United States Navy having served his country on active duty for 22 years through World War II and Korean Conflict as Aviation Machinist Mate. He was a member of the Buchanan Masonic Lodge.


Obituary of Willie Lee Bagwell
Mrs. Bagwell died on February 14, 2014 at Genesys Convalescent Center in Grand Blanc, MI. Mrs. Bagwell was born in Crestview, FL on January 10, 1923 to Charles and Cora Beard. Orphaned by the death of both parents, she nonetheless finished high school and later became a Licensed Practical Nurse. She met and married US Navy Chief Petty Officer Charles Bagwell on April 5, 1942. She was a devoted wife for 68 years and a wonderful mother for nearly 70 years. She followed her husband in his Naval career living at various times in Bremen GA, Pensacola and Jacksonville , FL, Norfolk, VA, Oakland, CA, Boston, MA and San Juan Puerto Rico before moving to Grand Blanc. A devout Christian, she was a member of the First Baptist Church of Bremen, GA. She was preceded in death by her husband Charles, siblings Henry, Ted, Sis, Ella Vee, Clara Belle and Maggie. She leaves behind two sons, Charles (Marlena)and Larry (Christina), 5 grandsons, Darren, Brett, Aaron, Jason, and Matthew, 8 great-grandchildren, Aaron, Jordan, Dylan, Macalister, Dakota, Lily, Josie, and Megan, and 1 great-great grandson on the way. We celebrate her "life well lived". The family requests that in lieu of flowers, donations be made to the First Baptist Church of Bremen, 331 Pacific Ave. Bremen, GA 30110. Funeral service and burial will be held at Hightower Funeral Home in Bremen, GA.1

Annie Mae Bagwell was born on 18 December 1918.1 She was the daughter of Alfred Columbus Bagwell and Sarah Ann Rebecca Simpson. As of after 1935,her married name was Kiser. Annie Mae Bagwell married Grover Gladstone Kiser after 1935. Annie Mae Bagwell died on 29 January 2013 at age 94
Annie Mae Kiser, of Bremen, passed away Tuesday, January 29, 2013 in a local health facility. She was born December 18, 1918, daughter of the late Alford Columbus Bagwell, Sr. and Sebra Ann Rebecca Simpson Bagwell. Mrs. Kiser was a retiree of Tanner Medical Center where she worked as a Licensed Practical Nurse and was, also, a beautician. She was a member of the Bethel Baptist Church and for many years was the teacher for the Adult Ladies Sunday School Class.