F, b. 11 November 1934, d. 1 March 2017
Bobbie Jean Evans was born on 11 November 1934 in Rome, Floyd County, Georgia. As of after 1950,her married name was Bagwell. She married Edward Carlton Bagwell, son of Carl B. Bagwell and Maude Louise Holloway, after 1950. Bobbie Jean Evans died on 1 March 2017 in Rome, Floyd County, Georgia, at age 82
Bobbie Jean Bagwell, of Rome, passed away on Wednesday at a local healthcare facility following a lengthy illness.

Prior to retirement, Mrs. Bagwell worked as a Customer Service Manager at Wal-Mart for 25 years.

She was a member of the Barnsley United Methodist Church. 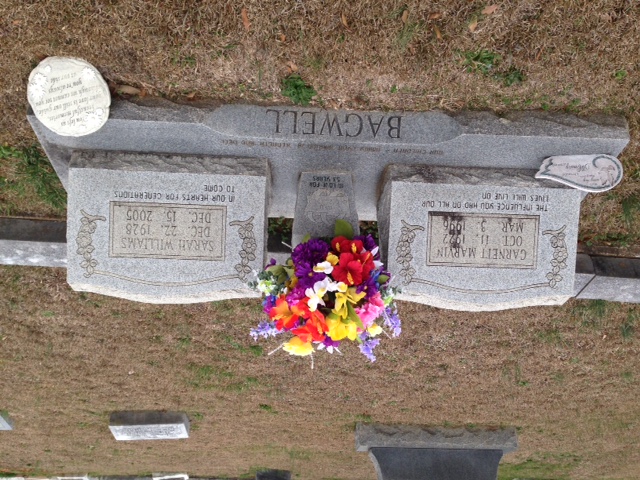 M, b. June 1845
John Bagwell was born in June 1845 in North Carolina. He married Kate H. Brandon, daughter of Haywood Brandon and Betty Vernon, before 1901.

A well know fixtures and cabinet maker, he was a native of Durham, NC; son of John and Kate H Brandon Bagwell; wife of Robina Tillinghast Bagwell.

Member of Covenant Presbyterian Church, a World War Marine Corp. veteran and has been a resident of Spartanburg for the last 22 years.

A graduate of Converse College, she was a proofreader with the Spartanburg Journal, the former afternoon paper, for 28 years and also was an arts critic for the paper.

Woody was born in Charlotte, NC in 1928. He graduated from Spartanburg High School in 1946 and continued on to earn a BS degree in Mechanical Engineering from Clemson University. He received his MDiv from San Francisco Theological Seminary and was ordained as a Presbyterian minister in January 1960.

Woody married Cecile in 1957. Together they served as Presbyterian missionaries in Pakistan during the 1960s. Upon returning to the States, Woody received a M.Ed. from CSU Fresno and began a teaching career with Bakersfield City School District. He retired in 1990.

Cecile died in February of this year. Woody is survived by his children: Bruce of Bakersfield and his children Tayler, Shaefer, Bryce and Noah; Bobi (David) of Roanoke, VA and their sons Luke, Timothy and Ian; Steve (Rosalind) of Waxhaw, NC and their daughter Laura; his sisters Catherine of Colfax, NC and Robina of Clarkston, MI.

Woody will be warmly remembered for his frequent puns and great sense of humor, his love for and loyalty to his family, his friendly smile, and especially his deep and devoted love for the Lord Jesus. In the last period of his life he looked forward to dancing with his beloved Cecile again, this time in the presence of Jesus, and to experience all that heaven has to offer.

Woody and Cecile loved to open their home and provide hospitality and fellowship to missionaries on home assignment or who were passing through Bakersfield.

The family wishes to thank Woody and Cecile's extended family, friends, fellow church members and colleagues who have so lovingly supported them through the years.

A memorial service will be held on Saturday, August 31st at 2:00 at Trinity Anglican Church, 11300 Campus Park Dr, Bakersfield, Fr. Karl Dietze officiating. The reception will be held at 3:30 in Westminster Hall at First Presbyterian Church, 1705 17th St.

In lieu of flowers, memorial donations may be made to Trinity Anglican Church, First Presbyterian Church, Global Teams or Hoffman Hospice.

Children of Haywood Brandon Bagwell Jr. and Cecile A. Lewis