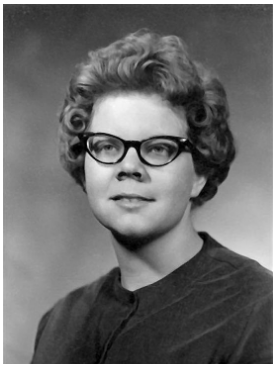 Betty Jean Bagwell
Betty Jean Bagwell was born on 28 April 1945 in Mecklenburg County, North Carolina.1 She was the daughter of Dewey Eugene Bagwell and Pauline Elizabeth Watts. Betty Jean Bagwell died on 10 November 2017 in Charolette, Mecklenburg County, North Carolina, at age 72
Betty Jean Bagwell, age 72 of Charlotte passed away on Friday, November 10, 2017. She received her Bachelor’s Degree from Trevecca Nazarene University in Nashville, Tennessee and went on to enjoy a long career as a second grade teacher at Oakdale Elementary School in the Charlotte-Mecklenburg County School district. She was also a life-time member of Trinity Church of the Nazarene in Charlotte. Betty loved the Lord and dedicated much of her life to being a servant to others. Throughout her life, she faced many battles, but ultimately, she has now won the war.
Preceded in death by her parents, Dewey and Pauline Bagwell; and brother, Larry E. Bagwell Sr. Survivors include one nephew, Larry (Lee Ann) Bagwell of Mooresville, NC; three nieces, Cathy (Chuck) Smith, Dana (James) Pender of Lincolnton, NC, and Denise (Ronnie) Webb of Mooresville, NC; 9 great-nieces and nephews; and 1 great-great nephew; and loyal caretaker, Sharon Shreve.
The family will receive friends on Wednesday, November 15, 2017 at Trinity Church of the Nazarene, 6031 Tuckaseegee Road, Charlotte NC 28208 from 11:00 a.m. – 12:00 p.m. A funeral service will be conducted at 12:00 noon followed by interment in Sharon Memorial Park. In lieu of flowers, memorial contributions can be made to Trinity Church of the Nazarene.1
She was buried at Sharon Memorial Park, Charlotte, Mecklenburg County, North Carolina.1

Published in The Greenville News: 10-30-2009.1 She was buried at Graceland West Cemetery and Mausoleum, Greenville, Greenville County, South Carolina.1