M, b. 1766
James Devore was born in 1766 in Yohogania County, Virginia. He was the son of Jacobus James Devore and Elizabeth Prys.

Eva Dingeman was born in 1719 in Kinderhook, Dutchess County, New York. As of 1738,her married name was Devore. She married Jacobus James Devore, son of Daniel Deveaux and Engeltje "Angelica" Cornelis, in 1738 at Sussex, New Jersey. Eva Dingeman died in July 1753 in Minisink, Bucks County, Pennsylvania.

F, b. circa 1841
Harriett Thirkield was born circa 1841 in Ohio.1 She was the daughter of John Lytle Thirkield and Nancy Manown.1

F, b. circa 1844
Jane Thirkield was born circa 1844 in Ohio.1 She was the daughter of John Lytle Thirkield and Nancy Manown.1

M, b. circa 1846
John Thirkield was born circa 1846 in Ohio. He was the son of John Lytle Thirkield and Nancy Manown.

M, b. circa 1852
William Thirkield was born circa 1852 in Ohio.1 He was the son of John Lytle Thirkield and Nancy Manown.1

F, b. circa 1855
Ella Thirkield was born circa 1855 in Ohio.1 She was the daughter of John Lytle Thirkield and Nancy Manown.1

F, b. circa 1859
Mina Thirkield was born circa 1859 in Ohio.1 She was the daughter of John Lytle Thirkield and Nancy Manown.1

F, b. circa 1846
Hanna B. Thirkield was born circa 1846 in Pennsylvania.1 She was the daughter of Alfred Thirkield and Cassandra Manown.1

M, b. circa 1841
James Thirkield was born circa 1841 in Pennsylvania.1 He was the son of Alfred Thirkield and Cassandra Manown.1

F, b. circa 1847
Virginia Thirkield was born circa 1847 in Pennsylvania.1 She was the daughter of Alfred Thirkield and Cassandra Manown.1

M, b. circa 1853
Frank Thirkield was born circa 1853 in Ohio.1 He was the son of Alfred Thirkield and Cassandra Manown.1

M, b. circa 1857
Hamp Thirkield was born circa 1857 in Ohio.1 He was the son of Alfred Thirkield and Cassandra Manown.1 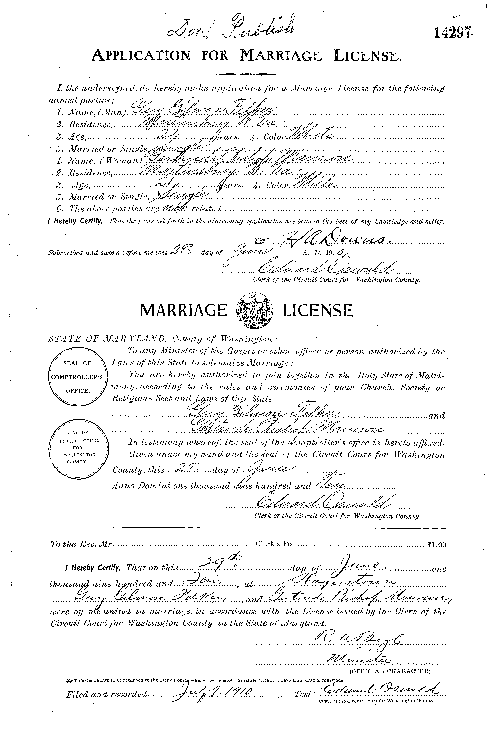 Child of Guy Gilmore Felker and Gertrude B. Manown

M, b. circa 1864
The History of West Virginia, Old and New Published 1923, The American Historical Society, Inc., Chicago and New York, Volume III, pg. 330 Berkeley SAMUEL SHOWALTER FELKER is a citizen of varied and important interests in Berkeley County, a successful business man, a democratic leader, and at all times cultivating the best interests of the community. Mr. Felker was born on a farm two and a half miles west of Greencastle, Pennsylvania. His father, Jacob Felker, was born on a farm near the line of Franklin County, Pennsylvania, and Washington County, Maryland, and at an early age was left an orphan. He then lived, until he was grown, with his uncle, Abraham Felker, in Franklin County. At the beginning of the Civil war he enlisted as a Union soldier and served in a Pennsylvania regiment. In 1869 he moved to Berkeley County, West Virginia, buying a farm in the Hedgesville District. He remained there work- ing and prospering until his death at the age of seventy- two. He married Mary Showalter, a native of Washington County, Maryland, who died at the age of eighty-two. They reared a family of nine children: Kate, who married James Robinson; Annie, who married Moses Kilmer; Louise, who became the wife of Calvin Zentmeyer; Charles H; David, who died at the age of thirty-three; John D; Calvin G; Rebecca, who married George A. Mason; and Samuel S. Samuel S. Felker attended school in the Hedgesville Dis- trict, and at the age of seventeen began learning the trade of miller in Brown's Mill in Pennsylvania. After three years there he returned to Berkeley County, and for two years operated Kilmers Mill, for one year the Back Valley Mill and for two years the Darkesville Mill. Ill health compelling him to make a change of vocation, he then became agent for the Cumberland Valley Railroad Com- pany at Darkesville, and at the same time conducted a general mercantile business there for three and a half years. On leaving the railroad service Mr. Felker moved to Martins- burg, and since then has been one of the progressive business men of this city. For three and a half years he was in business on West King Street, near the Square, following which he bought property on West King, near the postoffice, and continued his store in that location about three years. Selling out, he entered the real estate business, and in 1904 was elected a justice of the peace, an office he filled eight years. For three years Mr. Felker had a rather widely extended business in the sale of coal rights and coal lands. He and D. W. Shaffer were then partners in the real estate business for two years, and since then Mr. Felker has con- tinued alone, dealing in city and farm lands, and he makes sales over the three states of West Virginia, Maryland and Virginia.

At the age of twenty-two Mr. Felker married Alice Virginia Shipper, a native of Berkeley County and daughter of James B. and Hester (Stuckey) Shipper. Mr. and Mrs. Felker had one son. Guy G., who was educated in the city schools, prepared for college in Washington and Lee Uni- versity and subsequently entered the University of West Virginia. He graduated in the law department and had already achieved a substantial place in his profession when his early death occurred at the age of twenty-nine. For some time prior to his death he had been in the service of the income tax department of the Federal Government. Guy G. Felker married Gertrude Manown. He is survived by a son, Samuel Showalter Felker, who lives with his paternal grandparents. Mr. and Mrs. Felker are active members of the Presby- terian Church, and he is president of the board of deacons. Mr. Felker is prominent in the Masonic Order, being a past master of Equality Lodge No. 44, A. F. and A. M., past high priest of Lebanon Chapter No. 2, R. A. M., past eminent commander of Palestine Commandery No. 2, K. T., was president of the class that took the Scottish Rite degrees at Wheeling in 1920, and is a member of the Martinsburg Masonic Club. He is also affiliated with Washington Lodge No. 1, Knights of Pythias, and for six years was repre- sentative to the State Lodge and is a past grand master of the Ancient Order of United Workmen. He is also a mem- ber of the Loyal Order of Moose. Mr. Felker has had a deep interest in public affairs throughout his active career, and has served as delegate to numerous county, district and state conventions of the democratic party and for ten years was chairman of the county committee. Samuel S. Felker married Alice Virginia Shipper. Samuel S. Felker was born circa 1864 in Pennsylvania.

M, b. 19 January 1918, d. 10 September 1944
Lieutenant Jay Ross Manown Jr. was born on 19 January 1918 in Kingwood, Preston County, West Virginia.1 He was the son of Jay Ross Manown and Ella Avis Craig. He was serving aboard the U.S.S. Essex (CV-9 / aircraft carrier) as a Lieutenant during World War II sailing out of San Francisco. Excerpt from VF(N)-90 Squadron History, Torpedo Twenty Sea Stories
by Frank J. Savage from www.cv6.org:

"The role of squadron Exec was a different story. We left Hawaii with Jay Manown as Exec. Then came the softening-up campaign in preparation of the invasion of Palau. The Japs had a heavy concentration of anti-aircraft there, and Jay's plane was hit as he dove toward his target. The plane disintegrated, and the squadron lost a valuable pilot and crew."
http://www.cv6.org/ship/logs/ag20/vt20.htm. Lieutenant Jay Ross Manown Jr. died on 10 September 1944 at age 26 Killed in action during World War II.