Nathan Bagwell was born in 1817 in Edgefield County, South Carolina. He was the son of Jesse Bagwell and Mary "Polly" Raybourn. Nathan Bagwell married Amanda F. (?) before 1844. 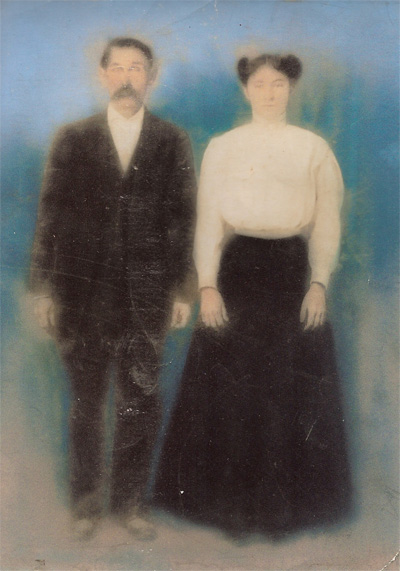 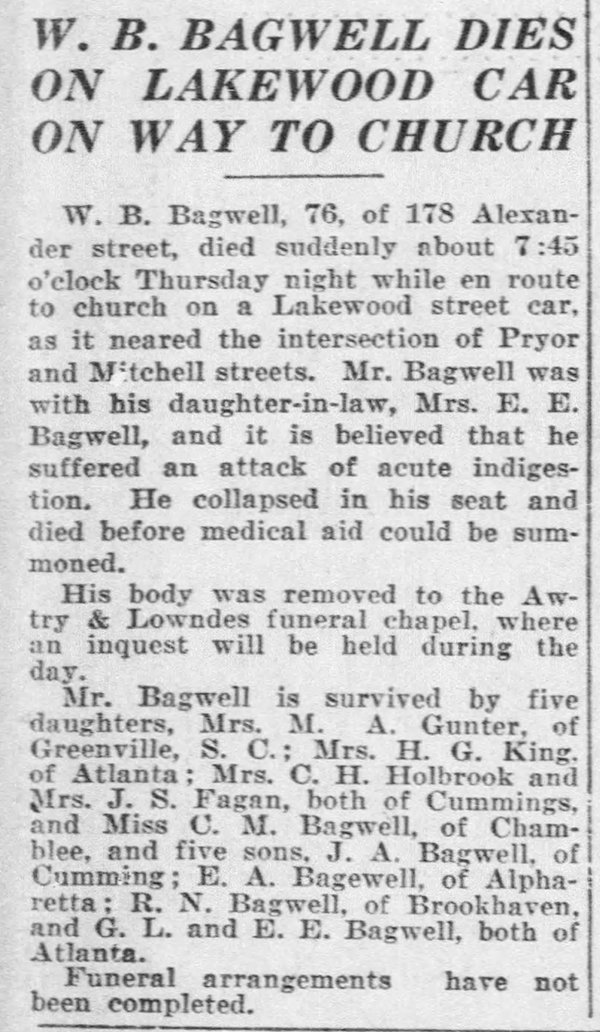 William Cox Jr. was born on 7 February 1807 in Stewart County, Georgia.1 He was the son of Edward Cox and Nancy Bryant Cox. William Cox Jr. married Milly Dowling, daughter of Dempsey Dowling and Martha Stokes, in 1826 at Georgia.2 William Cox Jr. lived in 1850 in Dale County, Alabama.1 He died on 18 November 1863 in Near Alexandria, Rapides Parish, Louisiana, at age 56.

Margaret Carney was born in November 1859 in Limerick, Ireland.1,2,3 She was the daughter of Thomas Carney and Mary Donnelly.1 Margaret Carney immigrated in 1861 from Ireland to Canada.2 As of 10 July 1877,her married name was Frizzle.1 She married Sutton Augustus Frizzle, son of William Freizell and Katherine (Catherine) Rushford, on 10 July 1877 at Woodstock, Oxford County, Ontario, Canada.1,2 Margaret Carney and Sutton Augustus Frizzle lived in 1911 in Woodstock, Oxford North, Ontario, Canada.2

James Franklin Manown was born in June 1860 in Preston County, West Virginia.2,1,3 He was the son of James Harvey Manown and Mary Isabella Armstrong.2 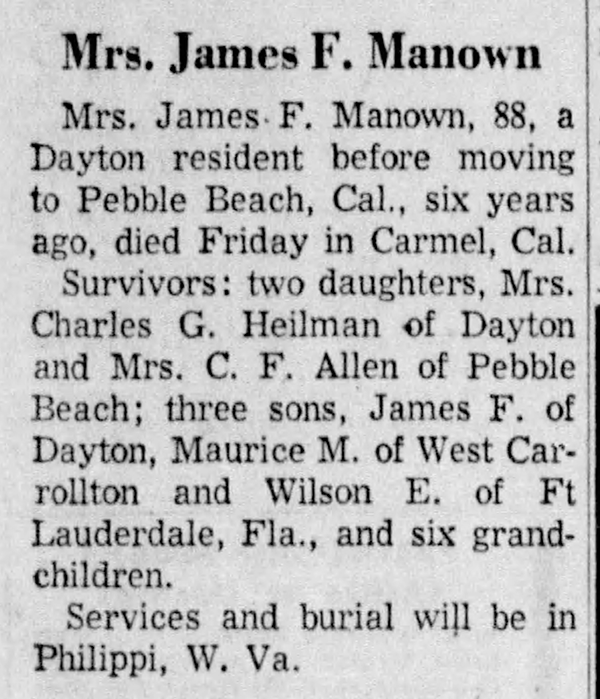 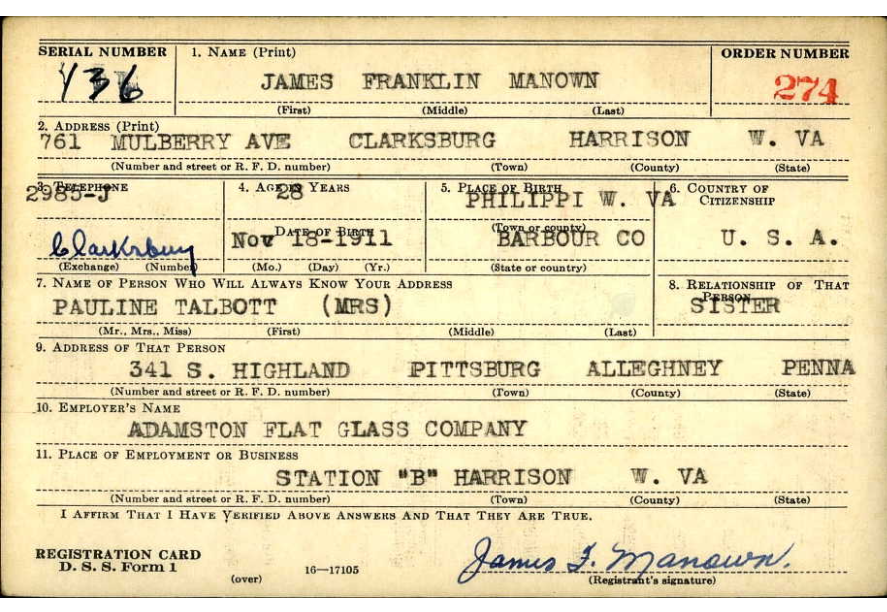 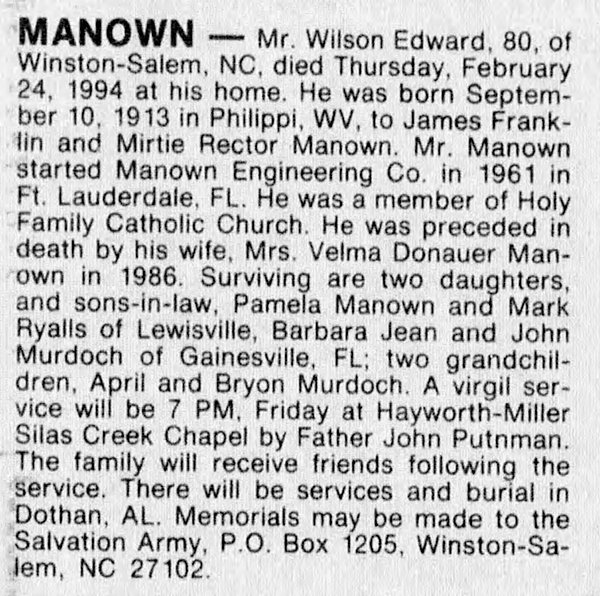 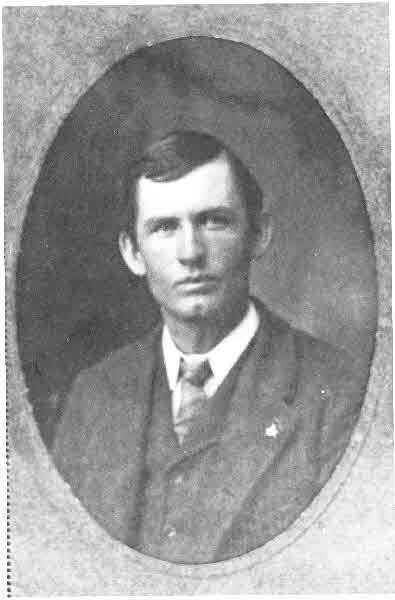 John Wesley Goff was born on 15 February 1879 in Enterprise, Coffee County, Alabama.1,2,3 He was the son of William Ashley Buckhanon Goff and Henrietta Earilla Cox.1 John Wesley Goff married Ola May Engram, daughter of John Robert Engram and Missouri Frances Hildreth, on 14 December 1897 at Enterprise, Coffee County, Alabama. (They were married by J. Hildreth - a cousin of Ola Mae Engram's.)3,4 He was He was in business with Fletcher Lafayette Goff (his brother). The business was called J.W. and F.L. Goff Livestock.

John Wesley was also the owner of Goff Mercantile Company of Enterprise, Alabama. An advertisement for his company read "Goff's Good Goobers Try One Ounce of Raw Peanuts After Each Meal. They are very Fine and delicious Roasted and served hot."

His daugther, Marjorie Helen Goff, said that John Wesley Goff would supply George Washington Carver with peanuts for his research on a a regular basis to promote their many uses. In 1912, Ola and John lived in Enterprise, Coffee County, Alabama. Their house had six bedrooms, three baths, a sleeping porch and a sunroom. It had stained glass windows in the living room and wainescoating in the dining room, living room and the wide hall.

Children of John Wesley Goff and Ola May Engram

Children of Thomas Augustus Frizzle and Rose A. Clark 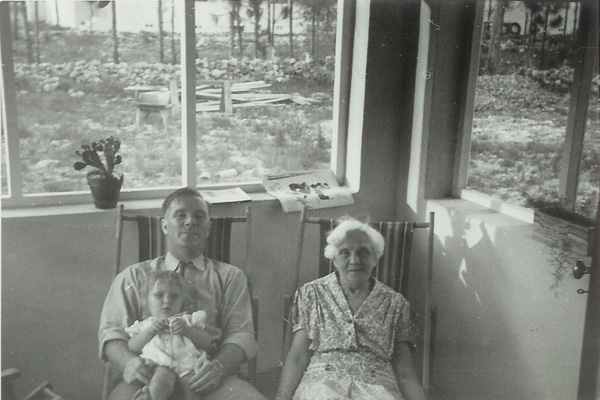 Children of Rose A. Clark and Thomas Augustus Frizzle 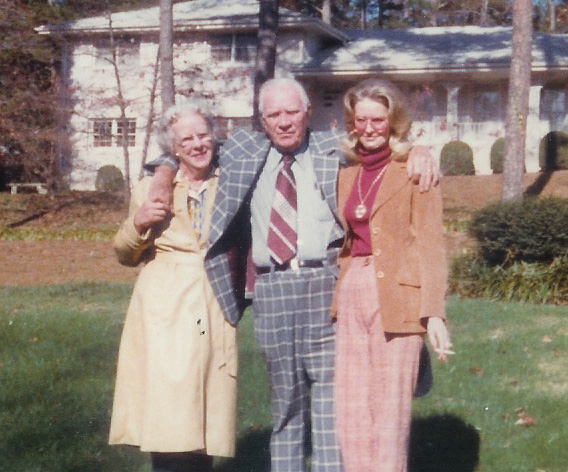 1 Her Social Security Number was (an unknown value) at 299-10-7616. Marjorie Ann Frizzell was born on 6 February 1908 in Ontario, Canada.2 She was the daughter of Thomas Augustus Frizzle and Rose A. Clark.2 Marjorie Ann Frizzell immigrated on 10 June 1923 to Niagara Falls, New york. Her married name was Dempert. She married John Dempert. Marjorie Ann Frizzell lived in 1940 in Columbus, Ohio. She died on 27 July 1997 in Riverside Methodist Hospital, Columbus, Franklin County, Ohio, at age 89 Marjorie Frizzell Dempert, age 89, of Upper Arlington, died Sunday, July 27, 1997 at Riverside Methodist Hospital. She was a candy maker with Maramor Restaurant retiring following 31 years of service and a cook at The Ohio Union for 10 years. She was the widow of John Dempert who died in 1970. She is survived by her niece, Vivian Frizzell; nephews, Donald (Marguerite) Frizzell, Gerald (Dee) Frizzell and Craig Frizzell; sisters-in-law, Kathryn Frizzell and Gertrude Dempert; other nieces and nephews; dear friend, Peggy Lucas and many close friends. Preceded in death by her parents, Thomas and Rose Frizzell, sisters, Dorothy and Margaret, brothers, Howard, John, Wilfred and Norman Frizzell and nephew, Melvin V. Frizzell. Friends may call 4-8 p.m. Wednesday at SCHOEDINGER NORTHWEST CHAPEL, 1740 Zollinger Rd. Committal service 1:00 p.m. Thursday, July 31, 1997 at Our Mother of Sorrows Chapel (St. Joseph Cemetery), 6440 South High St. Entombment to follow. (There will be no procession to the cemetery.) Special thanks to Dr. Raymond Barker and Jenny Purcell for your kindness and caring. 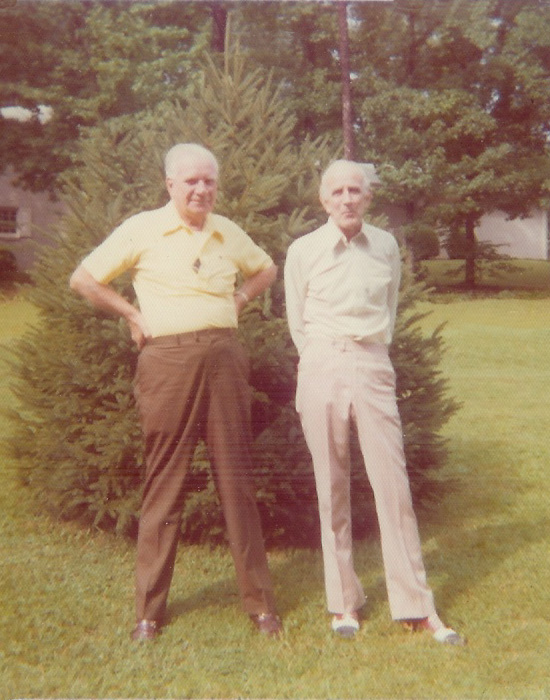 Left to Right: Wilfred Leo (Bill) Frezell and his brother Norman Friezelle
Christmas 1975
Photograph courtesy of Susan Lana Frezell
Norman Vincent Frizzell was also known as Norman V. Frizell. His Social Security Number was (an unknown value) at 275-03-4302. He was born on 28 September 1909 in Ontario, Canada.2 He was the son of Thomas Augustus Frizzle and Rose A. Clark.2 Norman Vincent Frizzell married Kathryn (?) before 1944. Norman Vincent Frizzell died on 12 May 1994 in Upper Arlington, Franklin County, Ohio, at age 84.3 He was buried at St. Joseph Cemetery, Lockbourne, Franklin County, Ohio, and entombed in Romans Mausoleum, South Side, Level D (4th), Crypt 16.3

F
Letter from Agnes Frezell (2/27/92) only source to date. Beverly Frizzle was the daughter of Thomas Augustus Frizzle and Rose A. Clark. 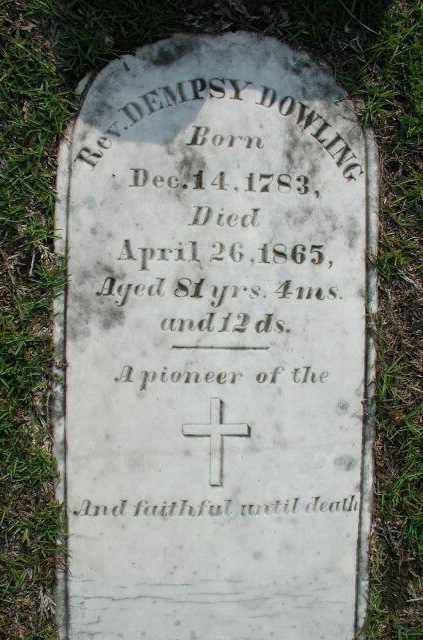 Reverend Dempsey Dowling's Tombstone
Dempsey Dowling was born on 14 December 1783 in Darlington District, South Carolina.2,3,4 He was the son of John W. Dowling and Nancy Boutwell.4,5 Dempsey Dowling married Martha Stokes, daughter of John Henry Stokes and Nancy Patience Alford, on 22 September 1803 at Virginia. The Southern Star article says the couple were married in South Carolina.4,5 Dempsey sold his 330-acre farm (laying on both sides of Lake Swamp) in preparation to move to Alabama.4 Before moving to Alabama in 1826, Dempsey Dowling had been a member of the Methodist Conference of South Carolina and upon arriving in Alabama one of the first things he and his brothers did was to establish preaching places throughout the country.
He was one of the founders of Claybank Church (Dale County, Alabama).
A crude log cabin built in 1829, was used for community meetings and church services and open to any minister of God’s word. It was soon organized as a Methodist church since most of the settlers were Methodist.
The present structure was built in 1852 and according to an historical marker nearby is the oldest public structure in Dale County.
He, two brothers, three sons, and numerous other descendents preached there. The century-old trees that were hewn square for its construction came from son Edward’s land. The supporting blocks came from son John Srs., land. Rafe, Edward’s Negro slave, did most of the log hewing. It is certain that no work was done on the Sabbath for an early edition of the “Alabama Historical Quarterly” states that Dempsey did not even allow meals to be cooked on Sunday. He always had his family walk to Claybank services (three miles distant) so that his beasts of burden might rest.6 Sold his 330 acre farm in the Jeffries Creek area of South Carolina on September 27, 1825 and headed to Alabama on the advice of his daughter, Lacy Mathews. Lacy and her husband, Elisha Mathews had moved to Dale County a few years earlier.1 He purchased land on 21 August 1837 at Dale County, Alabama. Bought 40.1475 acres.7 He died on 26 April 1865 in Near Ozark, Dale County, Alabama, at age 81.2,3,4 He was buried on 27 April 1865 at Claybank Cemetery, Ozark, Dale County, Alabama.2,3

Nancy Boutwell was born in 1763 in Darlington District, South Carolina, Conflicting information states that she was born in Virginia.1,2 She was the daughter of Burtonhead Boutwell and Elizabeth Commander.3,4 Nancy Boutwell married John W. Dowling, son of Robert Dowling and Sarah Guinn, in 1783 at South Carolina.2,3,4 As of 1783,her married name was Dowling.2 Nancy Boutwell died on 30 March 1849 in Haw Ridge, Dale County, Alabama.1 She was buried at Claybank Cemetery, Ozark, Dale County, Alabama.

Reverend Benjamin J. Hildreth was also known as Benjamin Griswold Hildreth. He was born on 15 March 1802 in Darlington District, South Carolina.1 He was the son of Benjamin Hildreth and Mary Latham. Reverend Benjamin J. Hildreth was christened on 10 April 1803 at Independent Congregational Circular Church, Charleston, Charleston County, South Carolina.2 He was admitted to the Charleston Orphan House on 28 March 1811. Benjamin and Jemima HILDRETH's first three children (William, Harriet and Susan) were born in South Carolina. The 1830 Alabama Census has BENJAMIN HILDRETH in Dale Co. and the 1850, 1860 Alabama Census has BENJAMIN HILDRETH in Coffee Co. BENJAMIN and Jemima HILDRETH's fourth child, Travis Zacheus (born 30 Dec 1830) was their first child to be born in Alabama, being born near Ozark in Dale County.

In the 1830s an area of South East Alabama had just been opened. This area was just below the Cherokee / Creek line and was in the Creek Indian district. There were Creek Indians rebelling against being gathered up into stockades to be sent west to Oklahoma (1838-9, "Trail of Tears"). The Creeks hated settlers who had taken land, and as a last expression Creeks would destroy, loot and burn the homes and destroy crops. Eventually a militia group would be formed to handle the situation. A BENJAMIN HILDRETH was listed on roll of soldiers for 1836/37 Creek Indian War as a member of Arch Justice's Company of Wellborn's Alabama Volunteers. A battle was fought in Barbour County, Alabama, at Hobdy's Bridge, not a war as such, but was to quell local rebellions associated with the Creeks. Militia probably did not participate in the big stuff, like Andrew Jackson's Alabama battles with the Creeks (such as at Horse Shoe Bend, etc.)

The BENJAMIN HILDRETH family moved to Butler County, Alabama after the 1860 Alabama Census, where he died in 1868 and is buried in Pioneer Cemetery, Greenville, Alabama.


THE HILDRETH FAMILY book (LCCCN 89-80085) page 7 Gives birth date and relationship to his parents (5 generations). Three of the thirteen children of Benjamin and Jemima Hildreth were born in South Carolina. The other ten were born in Dale County, Alabama, where the Hildreth's lived from 1830, except the time they were back in South Carlona for his training for the ministry, until the time they moved to Butler County, Alabama. The Dowlings help build and were charter members of Old Tabernacle Methodist Church in Dale County, Alabama. The Hildreths and Dowlings were [Circuit Riding] ministers, serving many churchs and minstering to the needs of the people of Dale County.2 He married Jemima Anna Dowling, daughter of John W. Dowling and Nancy Boutwell, in 1823 at Darlington District, South Carolina.2,3,1 Reverend Benjamin J. Hildreth and Jemima Anna Dowling lived in 1850.1 Reverend Benjamin J. Hildreth died on 26 November 1868 in Greenville, Butler County, Alabama, at age 66. He was buried at Pioneer Cemetery, Greenville, Butler County, Alabama. 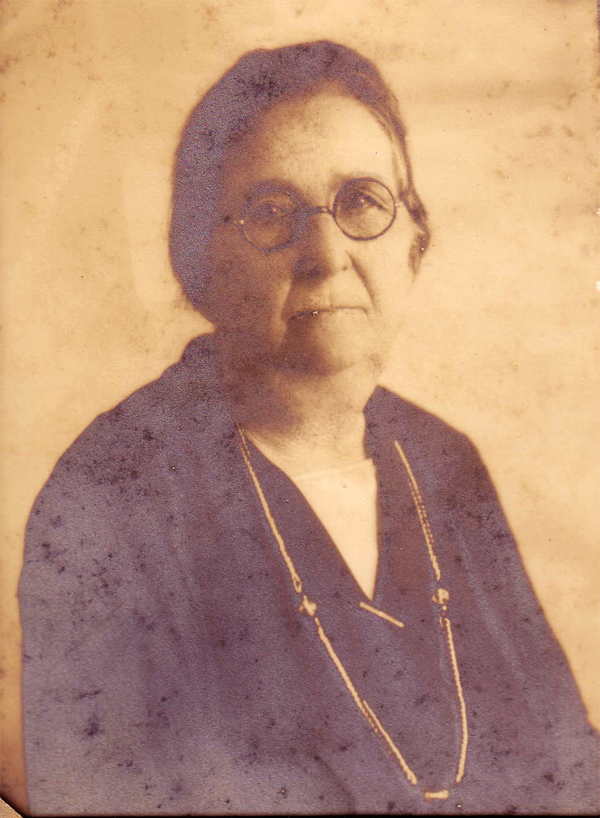 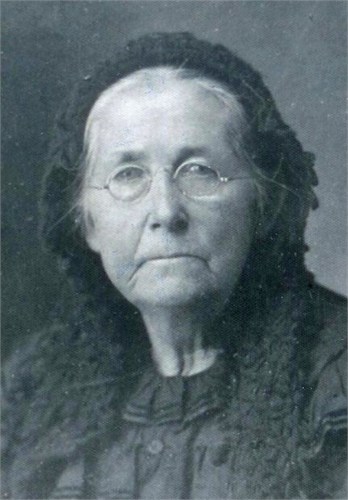