As a veteran of the US Army, he was a qualified parachutist with the 11th Airborne Division having served a tour of duty in Germany and throughout the United States.

He was preceded in death by his first wife and the mother of his children, Annette Bagwell Moss; sister, Tonia Moss Ball and brother, Jerry Moss and his beloved canine companion, Charlie.

Bobby was a member of Wilmington 319 Masonic Lodge in good standing and also the Wilmington Shrine club. Having a passion for old cars, he was a member of the Coastal Cruisers Car Club and helped raise over $72,000 for the Greenville Shriners Hospital for Children. He loved going to the races with his buddies and was a huge Nascar fan of both Dale Earnhardt and Dale, Jr.

The family would like to express their appreciation to Home Instead and Amedisys Hospice for their care and compassion during this trying time.

Due to Covid 19 restrictions, a memorial service will be held at a later date.

Memorials may be made to the Parkinson's or Alzheimer's Foundations of your choice.

Shared memories and condolences may be sent to the family at www.quinnmcgowen.com 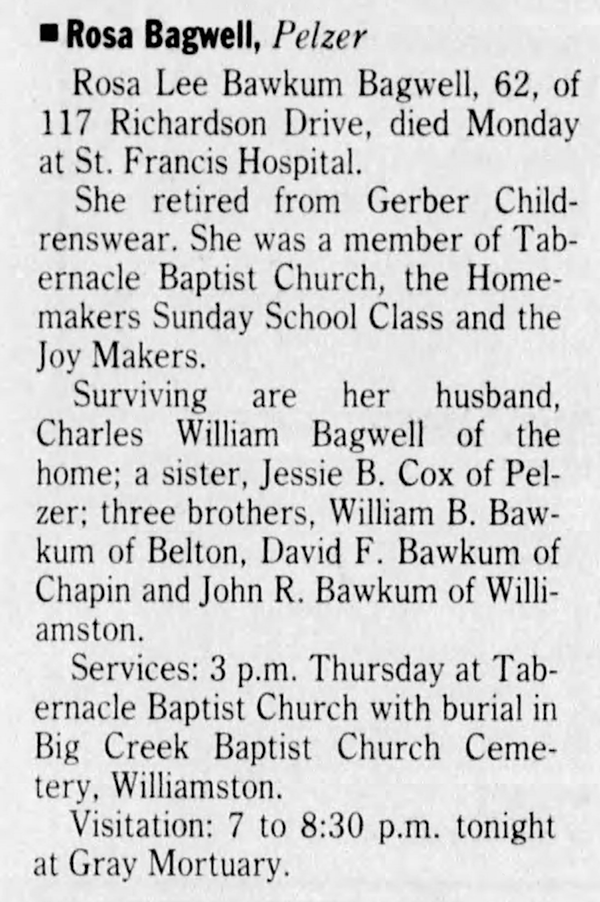 
LaVerda Bagwell passed away on August 6, 2010 at the age of 87. She was born on January 16, 1923, daughter of William and Nellie Brown. LaVerda is survived by her husband, Richard Earl; two daughters, Glendene Wilson (Kim), Susan Carmon (Mel), and three sons, Donald O'Dell (Maren), Ronald O'Dell (Sheri), and Richard J. Bagwell; 21 grandchildren and 36 great-grandchildren. LaVerda worked in food service and retired from CSU, Chico food services in 1978. She loved to cook, camp, hunt and fish and read. She was a friend to everyone she met and will be missed by all who knew her. A funeral service will be held on Friday, August 13, 2010 at 10 a.m. with viewing prior to services from 9:00-9:30 a.m. at the L.D.S. Church, 1450 E. Lassen Ave. and Ceres. Arrangements are under the direction of Brusie Funeral Home.

Richard John Bagwell is the son of Richard Earl Bagwell and LaVerda Brown.

William H. Bagwell was born on 4 September 1887.1 He was the son of James Harrison Bagwell and Lula Hope.1 William H. Bagwell died on 9 October 1892 at age 5.1 He was buried at Hopewell Baptist Church Cemetery, Gainesville, Hall County, Georgia.1