Florence Adams is the daughter of William R "Bill" Adams and Lula Bagwell.

Paul Dunn is the son of Thomas Tennyson Dunn and Ruth Texas Bagwell.

Child of Elette Dunn and (?) Ricks

Grover C. Karrh was born in 1886. He was the son of James Alvin Karrh and Elizabeth Jerusha Bagwell. Grover C. Karrh lived in 1973 in Birmingham, Jefferson County, Alabama.

Sally Karrh was born in 1877. She was the daughter of James Alvin Karrh and Elizabeth Jerusha Bagwell. Her married name was Colbert. Sally Karrh married (?) Colbert.

Samuel W. Karrh was born in 1878. He was the son of James Alvin Karrh and Elizabeth Jerusha Bagwell.

William M. Karrh was born in 1888. He was the son of James Alvin Karrh and Elizabeth Jerusha Bagwell.

James A. Karrh was born in 1891. He was the son of James Alvin Karrh and Elizabeth Jerusha Bagwell.

Lonnie B. Karrh was born in 1883. He was the son of James Alvin Karrh and Elizabeth Jerusha Bagwell. 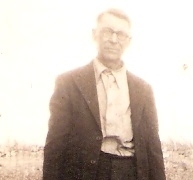 "Wash," as he was known, was a gifted musician who played violin, piano, and organ. He was music director at his church and had a powerful tenor voice. Wash was known as a Jack of all trades who could do or fix just about anything. He retired from the railroad and owned a general store in Lansing, Kansas, for a number of years.1 He was buried at Mount Muncie Cemetery, Lansing, Leavenworth County, Kansas.1

John Jackson Bagwell was born in 1841 in Anderson County, South Carolina.1 He was the son of James A. Bagwell and Sarah Gambrell. Enlisted in Company K, 1st (Orrs Rifles) Infantry Regiment South Carolina. He was admitted to General Hospital at Camp Winder, Richmond, Virginia. John Jackson Bagwell died on 29 June 1862 in Winder Hospital, Richmond, Richmond County, Virginia, of disease during the Civil War.

This vast hospital complex was constructed shortly after the outbreak of the War at what was then called "western terminus of Cary Street." It was on land now east of the present municipal-owned William Byrd Park (which was then the training grounds known as Camp Jackson) with an annex in the park area to the south of the present Fountain lake and to the east of the Reservoir. The hospital's boundaries are the present city streets of Winder, Amelia, and Hampton Streets, and Allen Avenue. To the north of Winder Hospital was Jackson Hospital with which it shared some of its activities.

It was referred to as "The largest hospital in the Confederacy," by the Richmond Whig on June 15, 1864 (1864-06-15, Richmond Whig; Account of editorial visit to Winder Hospital)

Winder Hospital opened with a capacity in excess of 3000 and quickly expanded to 4300. Originally divided into five divisions, a sixth was added plus a tent division for an additional 700 patients. It had 98 buildings.

Winder Hospital was named for General John Henry Winder who was appointed June 21, 1861 as Provost Marshal and commander of prisons in Richmond. Dr. Alexander G. Lane was the surgeon-in-charge.

A fire on January 21, 1864 destroyed the 2nd Division with a loss of $50,000 but with no injuries or deaths. The hospital maintained its own well-equipped fire brigade.

A volunteer force made up of attendants and patients under Lt. Col. A. S. Cunningham served actively a the Battle of North Anna. Later a battalion was formed with Jackson Hospital under the Command of Dr. Major Chambliss that saw active duty in the battles of 1865. A company of Negro soldiers was formed in February 1865 under Captain Grimes, which saw active service with those from Jackson.

Winder Hospital was used with Camp Jackson by Federal occupation forces as a hospital and encampment area. It was called Camp Grant. The Western annex was used as the headquarters and encampment for XXIVth Army Corps.

Numerous of the former ward buildings are still standing in the area and have been converted into homes, particularly on Powhatan Street.1
He was buried at Hollywood Cemetery, Richmond, Richmond City, Virginia.1

M, b. 1825
John Morrison was born in 1825. He married Malinda (Linda) Bagwell, daughter of James A. Bagwell and Sarah Gambrell, in 1852 at Anderson County, South Carolina.