F, b. 22 September 1904, d. 3 May 1961
Mary Magdalene Stevens was born on 22 September 1904 in Pungoteague, Accomack County, Virginia. As of after 1915,her married name was Bagwell. She married Julius Raymond Bagwell, son of Ligthy Turner and Mamie Magalina Bagwell, after 1915. Mary Magdalene Stevens died on 3 May 1961 in Nassawadox Estates, Northampton County, Virginia, at age 56. 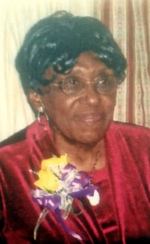