Mary Jane Bagwell was born in 1842 in South Carolina.1,2 She was the daughter of Henderson Onie Bagwell and Margaret Stone.1,2

Lewis Bagwell was born circa 1843 in Anderson County, South Carolina.1 He was the son of Henderson Onie Bagwell and Margaret Stone.1,2 He was in Company G, 2nd Rifles Infantry, South Carolina in the Confederate States Army during the Civil War.

The unit started its first services on Morris Island, SC, helping to build fortifications for the soon attack of Fort Sumter. They soon participated in the bombardment of Fort Sumter from Morris Island. Afterwards they were ordered to Virginia, but only four of the ten companies were to leave for Manassas, as the other six would not agree to leave. There the four companies fought at First Manassas as part of Bonham's Brigade.

Soon after their baptism of fire, they were on the Virginia Peninsula. Their original Colonel, Joseph Brevard Kershaw was soon promoted to Brigadier General, commanding the brigade that the 2nd was part of, and Captain John Doby Kennedy of Company E was promoted to Colonel. They fought at Williamsburg and Yorktown, and eventually at the Seven Days Battles. Once the federal Army of the Potomac was defeated, the Army of Northern Virginia went to Northern Virginia and fought at the Second Battle of Manassas. Kershaw's Brigade, and the 2nd South Carolina, missed the battle as they were on detached duty; but they rejoined the main army in time for the first invasion of the north.

At the beginning of the First Invasion of the North, the 2nd along with McLaws Division and Jacksons Wing successfully forced the surrender of the Harpers Ferry garrison. During the actual fighting phases, Kershaw's Brigade and Barksdale's Mississippi Brigade were to attack a fortified position in unison, Kershaw attacking the front while Barksdale pressured the flank. As the attack started, Barksdale waited until the third time Kershaw's South Carolinians attacked, which caused many to die in the charges beforehand. After the surrender the rest of the troops at Harpers Ferry, excluding Hill's "Light Division", met with the rest of the Army of Northern Virginia at Sharpsburg, Maryland. Here they fought in the West Woods. Earlier the federal I and XII Corps pushed Confederate troops away from the Dunker Church and Cornfield and the lead division of the II Corps was marching forward into the West Woods, a formation of brigades in line of battle on after the other. Whilst they were moving forward, the other two division of the II Corps swung around in front of the Sunken Lane. McLaws Division was waiting in the West Woods and once the leading division, under Major General Israel B. Richardson, was in their front, oblivious to the fact of the waiting confederates, they attacked in one of the greatest flanking movements of the war. Kershaw's Brigade fought here for the entire day, eventually helping to retake the lost grounds at the Dunker Church, it was here that Colonel Kennedy was wounded. After the retreat from Maryland, Kershaw's Brigade participated in the Battle of Fredericksburg. From the 2nd, Companies D, E, and G, under the command of Captain William Z. Leitner of Company E, were almost in the center of the stone wall on Marye's Heights. After the days fighting, Sergeant Richard Rowland Kirkland of Company E/G gave water to the wounded union soldiers, earning him the nickname "The Angle of Marye's Heights". Soon afterwards they fought at Chancellorsville, participating in the opening fight on May 1, 1863.
Now as part of the 1st Corps, Army of Northern Virginia, the 2nd with the rest of the army started for Pennsylvania. There they fought at Gettysburg, specifically Kershaw's Brigade fought in the Peach Orchard and the Wheatfield, two of the most savage fighting spots of the battle. At the Peach Orchard the 2nd advanced with two other units of Kershaw's Brigade, the 3rd SC Battalion and the 8th SC Infantry, through the orchard and eventually came under strong artillery fire. Thousands of pieces of shrapnel and canister hit their lines, and the 2nd lost about 50% of their numbers when an unknown officer ordered the regiment to turn, a perfect opportunity for the federal artillerist. Eventually pushing the federals away, they marched forward into the Wheatfield, where the fought in a bloody melee/rifle engagement. By the end of the day the regiment had lost more than half their men, and soon they would make the retreat to Virginia with the rest of the army.

After Gettysburg the Army of Northern Virginia retreated back into Virginia to rest and recuperate. It was then chosen that as the winter came and the armies settled down that the 1st Corps under Lt Gen James Longstreet would transfer to the Army of Tennessee to help it achieve a victory. When they arrived in northern Georgia, the Battle of Chickmauga had occurred all the day before and Longstreet's fresh troops were chosen to lead an assault on the federal line. When the assault began, Kershaw's Brigade fought troops from Maj Gen Thomas L. Crittenden's XXI Corps and pushed them back until stopped at Snodgrass Hill, where 2nd Lieutenant Richard R. Kirkland, the "Angel of Marye's Heights" was killed. After the retreat of the federal Army of the Cumberland the Army of Tennessee moved in to begin the Siege of Chattanooga but arguments between army commander Braxton Bragg and other commanders including Longstreet forced his Corps to return to Virginia. Before doing so Longstreet tried to recapture Knoxville but failed in doing so. Soon afterwards, the new overall commander of Union forces, Lt. Gen. Ulysses S. Grant, started the Overland Campaign, opening with the Battle of the Wilderness. The Confederate 3rd Corps under A.P. Hill, after a whole day of inconclusive fighting was suddenly attacked the day after on May 6, 1864, completely breaking and running. But just in time to aid the 3rd Corps was the arrival of the 1st Corps, with Kershaw's Brigade in the lead. Here they successfully pushed back troops of the federal II Corps under Maj. Gen. Winfield S. Hancock, before the end of the battle Lt. Col. Franklin Gaillard was mortally wounded. Fighting became inconclusive and the Army of Northern Virginia soon retreated to Spotsylvania Court House. Here the Brigade, under the command of Colonel John Henegan of the 8th SC Infantry whilst Gen. Kershaw was commanding the division, dug in and prepared for the battle soon to come. On May 8, 1864 troops from the 3rd Division, V Corps attacked the entrenchments of Henegan's Brigade and were repulsed after tough fighting. They were attacked again on May 12, and again repulsed the federal advance. Then they had limited combat in the Battle of North Anna. The troops of the confederate 1st Corps were soon moved to counter Grant's flanking maneuver and soon dug in at Cold Harbor. When the federals approached, the Confederates unleashed a devastating fire and the battle ended with thousands of federal casualties. Soon afterwards they were forced into the Siege of Petersburg and fought in the First Deep Bottom. Lewis Bagwell died on 28 May 1864 in Emory, Washington County, Virginia.2 He was buried at Montgomery White Sulphur Springs Cemetery, Montgomery County, Virginia. 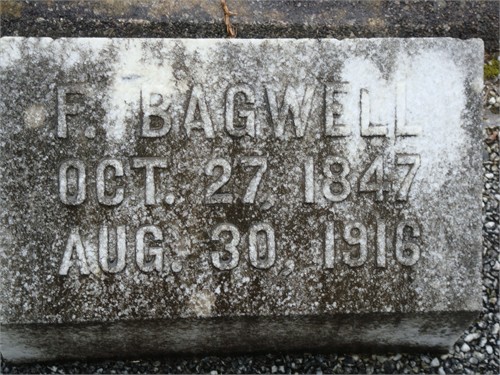 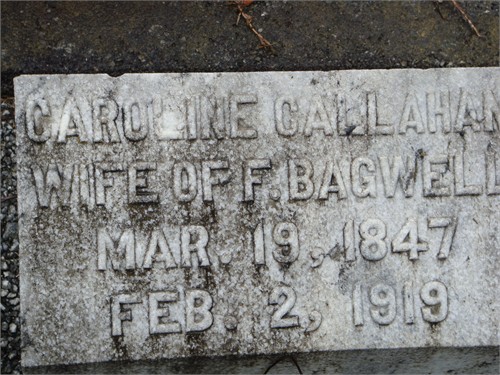 Vernice Bagwell was also known as Verna Bagwell. She was born circa 1909. She was the daughter of Ollie Wilton Thomas Bagwell and Evie Moore. Vernice Bagwell died in November 1980 in Greenville County, South Carolina.

Sylvene Bagwell was born on 11 March 1910. She was the daughter of Ollie Wilton Thomas Bagwell and Evie Moore. Sylvene Bagwell died in August 1989 at age 79.

F, b. 9 December 1917, d. 29 February 2016
Eunice Galloway was born on 9 December 1917 in Pickens County, South Carolina. She was the daughter of Oscar S. Galloway and Lou Annie Bryant. As of before 1938,her married name was Bagwell. Eunice Galloway married Rufus Doyce Bagwell, son of John Luther Bagwell and Essie Jane Foster, before 1938. Eunice Galloway died on 29 February 2016 at age 98 Eunice Julia Galloway Bagwell, 98, wife of R. Doyce Bagwell. She was born in Pickens County, daughter of the late O. S. and Lou Annie Bryant Galloway. She was a graduate of Pickens High School, a retired employee with Ellijean Mill, attended Tabor United Methodist Church where she taught Sunday School and was a member of Arial Wesleyan Methodist Church.

Surviving are daughters, Gwen Martin (Leland) of Clemson and Kathy (Frank) Gentry of Pendleton; sisters, Christine Cochran and Wylene King of Easley and Eulalia Gause of Spartanburg, SC; 5 grandchildren; and some great grandchildren.