Carl Hildreth is the son of Donelle Hildreth.

Born in Pickens County, she was a daughter of the late George and Beulah Shirley Hawkins. She was a homemaker and of the Pentecostal faith. Mrs. Bagwell was married to the late Roscoe Elijah Bagwell. She was preceded in death by a son, Wallace Bagwell, four brothers, and one sister.

Visitation will be held from 6-8 PM Tuesday, at Robinson Funeral Home-Downtown.

The family will be at the residences of Hoyt Bagwell, 308 South Sixth Street, Easely, SC.

Condolences may be expressed online at www.robionsonfuneralhomes.com or in person at Robinson Funeral Home-Downtown, which is assisting the family.

Born in Pickens County on April 29, 1939, he was the son of the late Roscoe Elijah and Ethel Mae Hawkins Bagwell. Mr. Bagwell was retired from the trucking industry, he worked for both Trisim Specialized Carriers and Bi-Lo/CNS Wholesale. He also attended Venture Church in Easley, enjoyed listening to Bluegrass music, and was an avid Atlanta Braves Baseball Fan. 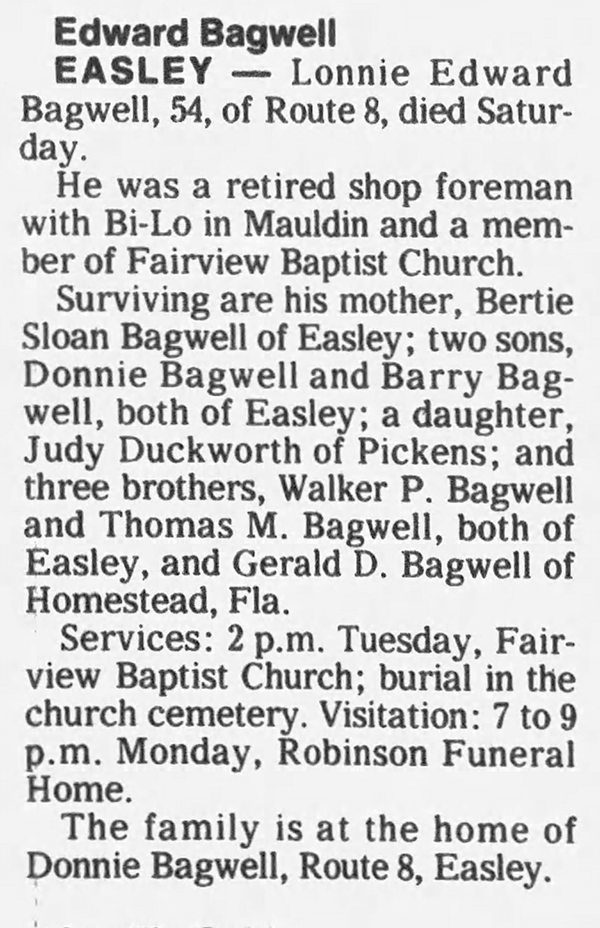 M
Donnie Bagwell is the son of Lonnie Edward Bagwell.

M
Barry Bagwell is the son of Lonnie Edward Bagwell.

Alan Floyd Bagwell, 67, of Huntsville, Texas passed away Oct. 10, 2013. Alan was born in Roswell, New Mexico on June 6, 1946. Alan married his sweetheart Charlotte on June 25, 1966 in Uvalde, Texas. Alan graduated from PSJA High School in Pharr, Texas and later in life graduated from Concordia University in Austin, Texas with a Bachelors Degree in Psychology. Alan spent the majority of his career working for the states of Texas and New Mexico caring for the mentally disabled. Alan loved all sports including football, baseball, hunting, and fishing and just about anything that could be umpired or refereed. Alan spent most of his free time working with youth in the FFA and 4-H, volunteering with the local hospice companies to provide better living conditions for people in need, refereeing football and baseball games, and spending time with family and friends. Alan was a man that never gave up on anyone and saw the good in all people. Alan was the first to arrive and the last to leave; he would give you the shirt off his back and then teach a man how to earn his own shirt. Alan was a man that worked endlessly to ensure that not only his family had what they needed but his community as well. Alan is survived by his wife Charlotte of 47 years, sisters Dorothy Bagwell, Norma Floyd and Kathy Calloway, his daughter Renee and her husband Jim Untermeyer, daughter Deneane and her husband Jason Thompson, daughter Nancy and her husband Dean Trigg, and his sons David and Lane. Grandchildren Matthew, Ryan and Emily Untermeyer, Richard, Aaron and Kyle Curlee, Hannah and Lindsey Trigg, great-grandchildren Bayleigh, Avery and Elijah Hollingsworth-Curlee, and numerous nieces and nephews. In Heaven, Alan will be joining his parents Floyd and Lois Bagwell, his sister Carole Romero, and his beloved friend, mentor and brother-in-law Jeff Floyd. A memorial service To celebrate his life will be held 2:00 PM Friday, October 18, 2013 at Calvary Baptist Church in Huntsville,Texas. In keeping with his wishes he will cremated at Brooke Crematory - Huntsville, Texas .1

KERRVILLE – Dorothy Rowena Bagwell, 78, of Bandera, Texas passed from this life on Saturday, August 22, 2015 at a local hospital to spend an eternity with her Lord and Savior. She was born on April 19, 1937 in Roswell, New Mexico to Floyd Eugene and Lois Christyne Boggs Bagwell.

Growing up in Pharr, Texas in the Rio Grande Valley’ she was lifelong educator, earning her Masters Degree from Pan American University (formerly Pan American College), Edinburg, Texas. In her teaching career, she was associated with the school districts in Pharr, San Juan, and Alamo. Dorothy was also a counselor at the Hatch, New Mexico schools, and was part of the Job Corp. at Roswell, New Mexico along with being the coordinator for HOSTS Program at P.S.J.A. until her final retirement.

Touching many lives, she was an encouragement to many young people as a teacher. She was loved by many friends and will be sadly missed. Dorothy spent many summers at her favorite mountain campsite in New Mexico – many family get-togethers on Bonita Lake, near Ruidoso, New Mexico.

Dorothy was preceded in death by her parents; a sister, Carole Romero; and a brother, Alan Bagwell..

She is survived by sisters, Norma Bagwell Floyd of Noblesville, Indiana, and Kathy Bagwell Callaway of Bandera, Texas; numerous nieces and nephews who will all miss her dearly.

Dorothy will be laid to rest in her hometown of Roswell, New Mexico. At her request, there will be no local services.

In lieu of floral arrangements, the family requests Memorial Contributions be made in her memory to the Barbara Bush Foundation for Literacy, 516 North Adams Street, Tallahassee, FL 32301 (barbarabush.org).

Arrangements are under the direction and personal care of the professionals at Kerrville Funeral Home.