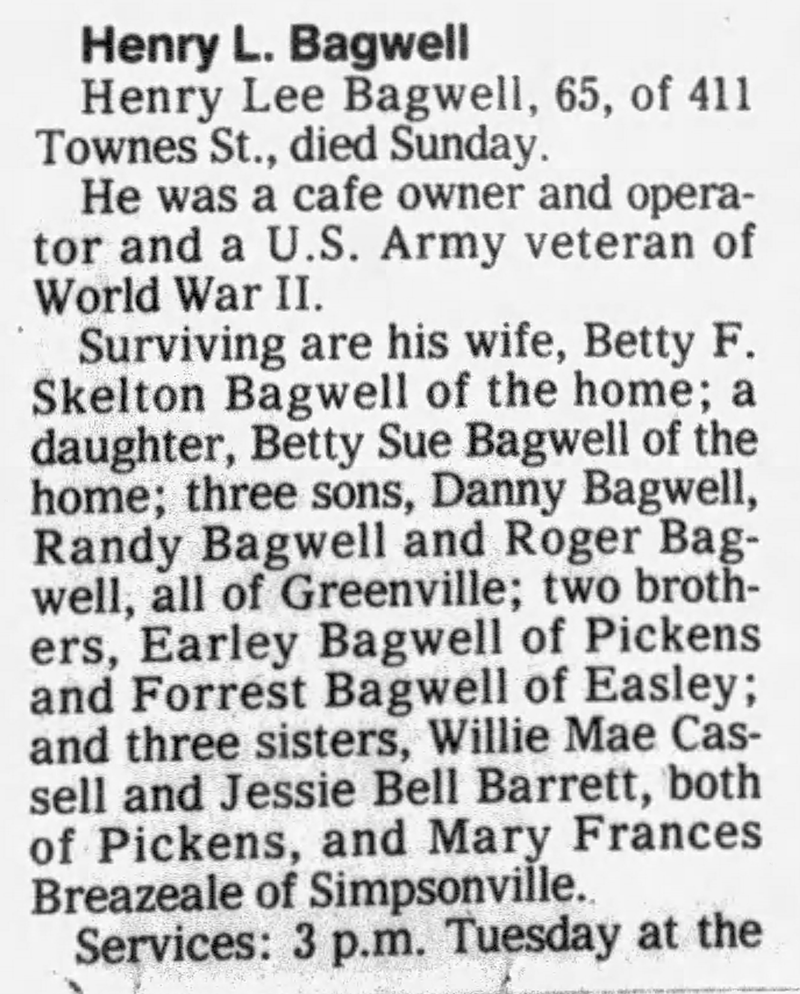 Forrest was born in Easley, a son of the late Forrest Lee and Hazel Atkins Bagwell. He was retired from Union Bleachery in Greenville and was a member of The Pickens Church of God. A veteran of the U. S. Army during World War II, he was an active member of The American Legion, Post 11 in Pickens where he served as chaplain, and Seniors Unlimited of Pickens.

Survivors include a brother, Earley Bagwell of Pickens, and sister Frances Breazeale and her husband Carl of Fountain Inn. He is also survived by a number of nieces and nephews.

The family will receive friends from 1:30 to 3 PM Tuesday, August 6, 2013 at Dillard Funeral Home in Pickens with funeral services following at 3 PM in the funeral home chapel with The Reverend Charles Smith and The Reverend Fred Bryant officiating. Burial will follow at Hillcrest Memorial Park and Gardens with military honors.1 He was buried at Hillcrest Memorial Park, Pickens, Pickens County, South Carolina.1

M, b. 1912, d. 1913
Gaines Bagwell was born in 1912. He was the son of Reverend James Andrew Bagwell and Lucy Gilstrap. Gaines Bagwell died in 1913. He was buried at Smith Chapel Wesleyan Methodist Church Cemetery, Pickens County, South Carolina.

She was born in Greenville County, daughter of the late W.C. and Mary Ann Renner Wright.
She was a homemaker and a member of Easley Christian Fellowship.

Surviving are her husband James Lewis Bagwell of the home; three gaurghters, Donna Gillespie, Mary ann Patterson and Janet Ross all of Easley; a brother Ben Wright of
Greenville; a half brother, Joe Wright of Easley; three sisters Omie Brown and Rachel Goss both of Easley; Mickey Hester of Florida, a half sister Mary Wilson of Easley.
seven grandchildren and two great grandchildren.

Miss Bagwell was born in Pickens County and was a daughter of the late Andy and Lucy Gilstrap Bagwell.

Surviving are three brothers, James Bagwell and Albert Bagwell, both of Easley, and Samuel Bagwell of Mount Dora, Fla; and a sister, Janie Bagwell of Easley.

Graveside services will be held at 11 a.m. today at Greenlawn Memorial Park, with the Revs. Jim McManus and Frank Jenkins officiating. Family members are at their respective homes.

Robinson Funeral Home-Downtown is assisting the family with arrangements. Published in The Greenville News on January 31, 2006.1
She was buried at Greenlawn Memorial Park, Easley, Pickens County, South Carolina.1