Thelma Bagwell was born circa 1936 in South Carolina. She was the daughter of Harold J. Bagwell and Betty Louise Peace. As of after 1953,her married name was Duncan. Thelma Bagwell married (?) Duncan after 1953. 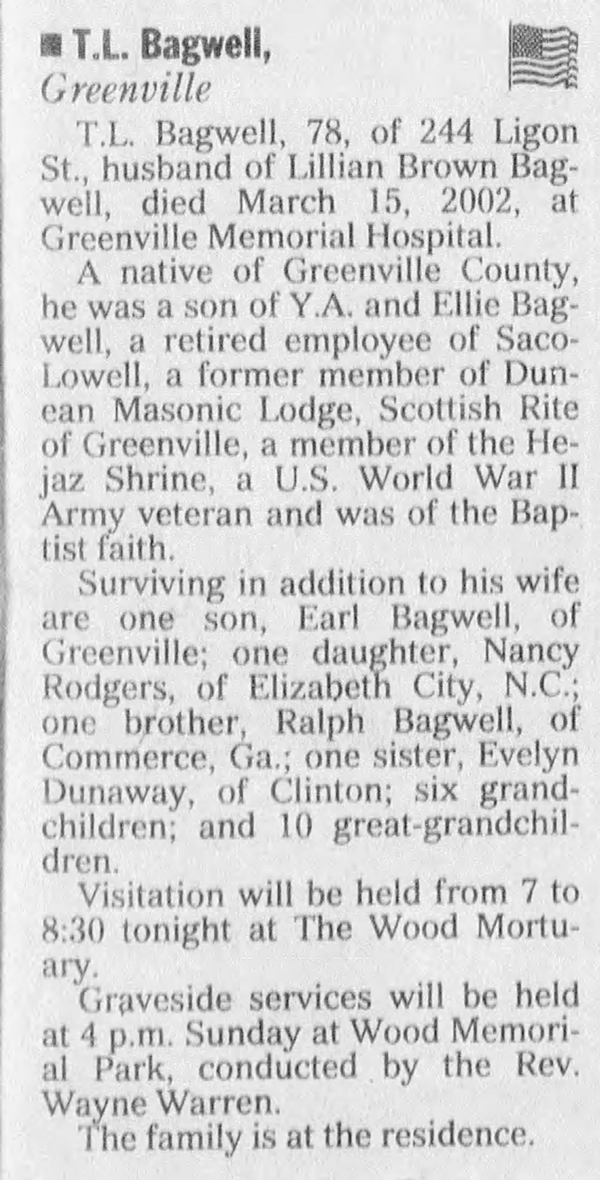 A native of Greenville County, he was a son of Y.A. and Ellie Bagwell, a retired employee of Saco-Lowell, a former member of Dunean Masonic Lodge, Scottish Rite of Greenville, a member of the Hejaz Shrine, a U.S. World War II Army veteran and was of the Baptist faith.

Surviving in addition to his wife are one son, Earl Bagwell, of Greenville; one daughter, Nancy Rodgers, of Elizabeth City, N.C; one brother, Ralph Bagwell, of Commerce, Ga; one sister, Evelyn Dunaway, of Clinton; six grandchildren; and 10 great-grandchildren.

Visitation will be held from 7 to 8:30 tonight at The Wood Mortuary.

Graveside services will be held at 4 p.m. Sunday at Wood Memorial Park, conducted by the Rev. Wayne Warren.

The family is at the residence.

A native of Spartanburg County, daughter of the late Barney and Lola Leopard Brown, she was a retired employee of J.P. Stevens and of the Baptist faith.

Surviving are a son and daughter-in-law, Earl and Janice Bagwell of Greenville; a daughter, Nancy Rodgers of Elizabeth City, North Carolina; six grandchildren and ten great-grandchildren.

Graveside services will be held 2p.m. Friday at Wood Memorial Park, conducted by Rev. Danny Monroe. Visitation will be held 7-8:30 p.m. Thursday at The Wood Mortuary.

The families are at their respective homes. Online condolences may be made at www.thewoodmortuary.com Published in The Greenville News on February 15, 2012.
She was buried at Wood Memorial Park, Duncan, Spartanburg County, South Carolina. 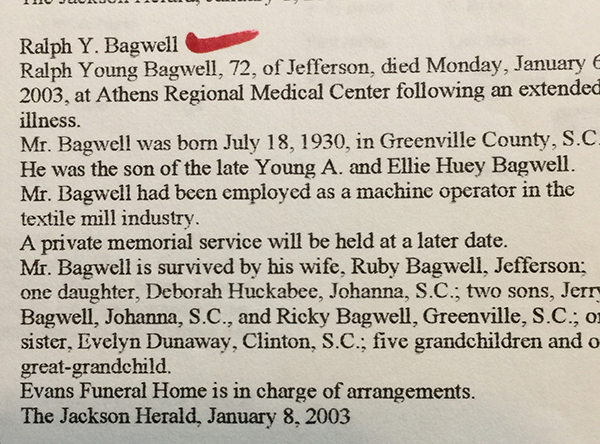 Evelyn Loretta Bagwell was born on 24 May 1933 in Piedmont, Greenville County, South Carolina. She was the daughter of Young Antley Bagwell and Ellie Mae Huey. As of after 1954,her married name was Dunaway. Evelyn Loretta Bagwell married Jesse J. Dunaway after 1954. Evelyn Loretta Bagwell died on 26 January 2007 in Clinton, Laurens County, South Carolina, at age 73 Evelyn B. Dunaway Date: May 24th, 1933 - January 26th, 2007 Obituary: Dateline- Clinton, S.C. Evelyn B. Dunaway, age 73, of 106 Gordon St. died Friday, January 26, 2007 at her home. She was born in Piedmont and was the daughter of the late Young and Ellie Huey Bagwell . Mrs. Dunaway was a homemaker and a member of the Holly Grove Baptist Church. She is survived by her husband, Jesse Dunaway of the home; two daughters, Frankie Richardson of Laurens and Sharon Peav y of Dallas, TX; 8 grandchildren and 25 great grandchildren. She was the last member of her immediate family. A memorial service will be held at a later date. Gray Funeral Home of Clinton. Memorials: Memorials may be made to the Evelyn B. Dunaway Memorial Fund, 106 Gordon St., Clinton, SC 29325 Cemetery: Rosemont Cemetery 850 Willard Road Clinton, SC 29325. She was buried at Rosemont Cemetery, Clinton, Laurens County, South Carolina.

Bennett Bagwell was born circa 1893. He was the son of Milton Young Bagwell and Harriet Effie Wood. Bennett Bagwell died on 7 March 1898. He was buried at Clear Spring Baptist Church Cemetery, Simpsonville, Greenville County, South Carolina.

Born in Greenville, he was the husband of Aileen C. Bagwell, and son of the late Jackson Voight Bagwell and Lecie Shropshire Bagwell.

A U.S. Navy veteran, Mr. Bagwell retired from Duke Power after 35 years. He was a musician in the Greenville area for many years, and was a member of Cedar Lane Baptist Church.

In addition to his wife, he is survived by children, Debbie B. Peele, Michael A. Bagwell and Cindy A. Bagwell, all of Greenville; a sister, Helen B. Spradling, of Greenville; and grandchildren, Heather Peele, Laura and John Bagwell.

The family will receive friends from 7 to 8:30 p.m. today at Thomas McAfee Funeral Home, Northwest.

Funeral services will be at noon Thursday at the funeral home, with burial at Graceland Cemetery West.

The family is at the residence.

Published in The Greenville News: 07-24-2002. He was buried at Graceland West Cemetery and Mausoleum, Greenville, Greenville County, South Carolina.

M
Eugene Bagwell is the son of Julius E. Bagwell and Lula Julian.