Children of Nellie May Gentry and Henry Allen Bagwell 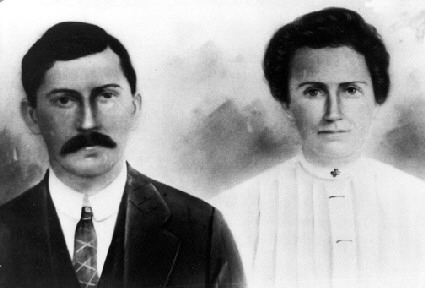 Fletcher Bell Hildreth was born on 1 October 1911 in Enterprise, Coffee County, Alabama. He was the son of Reverend Edward Homer Hildreth and Ida Belle Marsh. He enlisted in the US Navy from 7 July 1927 to October 3, 1935. I believe he lied about his age as the government lists him as being born October 1 1909, but the 1920 Census shows him as being born 1911. With his enlistment in 1927, he would have been 16 which is too young to enlist. By saying he was born in 1909, then he would have been 18 in 1927 and able to enlist. Fletcher Bell Hildreth married Ada Marie (Dolly) Peppard on 23 May 1931. Fletcher Bell Hildreth lived in 1940 in New York, Queens County, New York. He lived in 1965 in Fort Pierce, Florida. He died in November 1980 in Orange, Orange County, Florida, at age 69. He was buried at Arlington National Cemetery, Arlington, Arlington County, Virginia.

Fred Hildreth was born on 17 May 1914 in Alabama. He was the son of Reverend Edward Homer Hildreth and Ida Belle Marsh. Fred Hildreth died on 24 January 1916 in Enterprise, Coffee County, Alabama, at age 1.

Charles Hildreth was born circa 1924 in Alabama. He was the son of Reverend Edward Homer Hildreth and Pearl Lucille Cotton. Charles Hildreth lived in 1965 in Winter Haven, Florida. He died on 23 April 2012 in Casselberry, Seminole County, Florida.

Melba Hildreth was born on 21 November 1914 in Birmingham, Jefferson County, Alabama. She was the daughter of Reverend Edward Homer Hildreth and Ida Belle Marsh. As of before 1940,her married name was Skipper. Melba Hildreth married (?) Skipper before 1940. Melba Hildreth died on 9 November 2012 in Casselberry, Seminole County, Florida, at age 97.

F, b. August 1848
Ellen Nora (?) was born in August 1848 in Georgia. She married Judson Saunder Engram, son of Oliver Kanady Engram and Mariah Louise Dennard, in 1885.