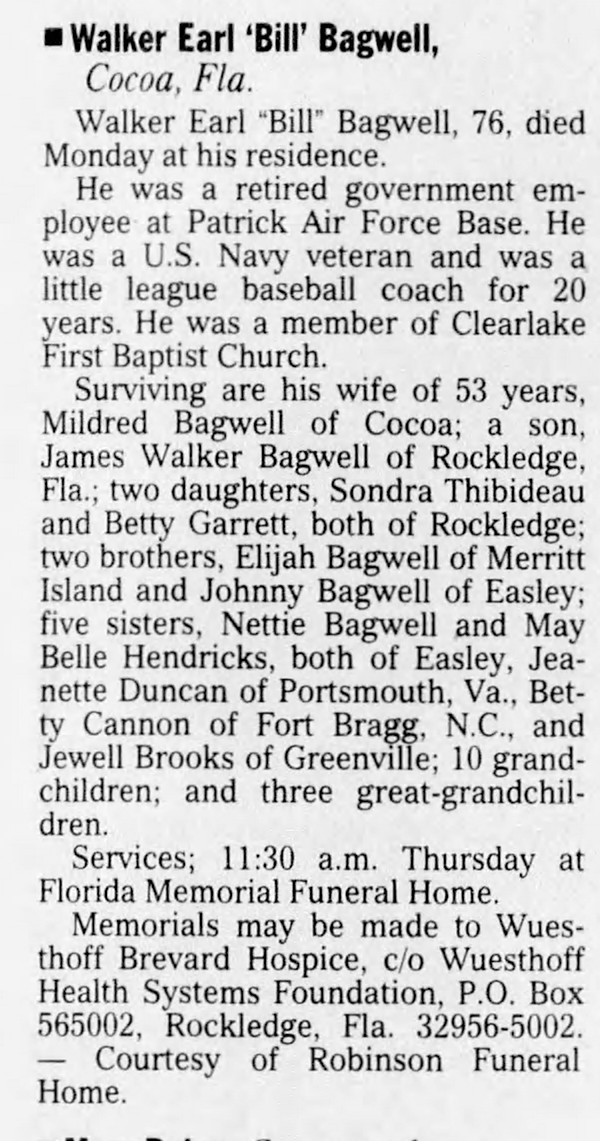 Mildred Gertrude (Ravan) Bagwell - Obituary
Florida Today - September 24, 2008 - Page 05
Mildred Gertrude Ravan was born on 23 October 1920 in Easley, Pickens County, South Carolina.1 As of February 1945,her married name was Bagwell. She married Walker Earl Bagwell, son of Elijah Walker Bagwell and Leitha Mae Martin, in February 1945. Mildred Gertrude Ravan died on 23 September 2008 in Cocoa, Brevard County, Florida, at age 87 MILDRED BAGWELL COCOA Mildred G. Bagwell, 87, of Cocoa, Florida, passed away peacefully on Tuesday, September 23, 2008. She was preceded in death by her husband of 53 years, Walker "BilI" Bagwell, in 1998. Born in Easley, South Carolina, on October 23, 1920, she was the daughter of James and May Condrey Ravan, and the stepdaughter of Lillian Holder Ravan. Mrs. Bagwell worked in South Carolinas textile mills before moving with her family to Cocoa in 1958. She was a member of the Clearlake Baptist Church. As a young woman, she was a Sunday school teacher for many years. She was her family's matriarch, a dedicated mother and constant presence in the lives of her grandchildren. She was known by all she met for her sense of humor, quick wit, and unconditional love. Mrs. Bagwell is survived by her children, Sondra Thibideau (Ray), James Bagwell (Ada), and Betty Garrett (Mark); her grandchildren, Joey (Phyllis), Michelle (Paul), Angie (Mike), Shawn, Chris (Mary Ann), Ryan, Dusty, Jason, Jeff, and Jeremy (Ashley); and her great grand children, Amanda, Chelsea, Reyn, Walker, Lauren, Ashley, Tyler, Tanner, Bronte, Aidan, Breana, Logan, and Hayley. Mildred was preceded in death by four sisters, Alma, Edna, Etta Mae, and Faye; and two brothers, Ralph, and Boyce. She is also survived by her sisters, Kitty Fulbright (Click), Ruth Major, Dot Franklin (Ron), Edith Stidmon (Gary), and Gail Roberts (James); her brothers, Jack and Bill Ravan; and numerous nieces and nephews. Mrs. Bagwell is also survived by her beloved dog, Shiloh. The family will receive friends on Thursday September 25, 2008 from 6 to 8 p.m., at Florida Memorial Funeral Home Chapel, 5950 South US Highway #1, Rockledge, FL, 32955. Funeral Services will be held Friday, September 26, 2008 at 4 p.m., at the Funeral Home Chapel, with interment to follow at Florida Memorial Gardens. Flowers will be received by Florida Memorial Funeral Home. Memorial contributions can be sent to Wuesthoff Brevard Hospice Care Center, 110 Longwood Ave, Rockledge, FL 32955.1 She was buried at Florida Memorial Gardens, Rockledge, Brevard County, Florida.1

Children of Mentora May Worley and Homer Lester Bagwell Sr.

Daughter of Homer Lester and Mentora Worley Bagwell, she was born January 21, 1927 in Easley, SC.

She lived most of her life in South Carolina, and lived in Aventura, FL prior to moving to Indiana, PA in December. She was self-employed as owner of various rental properties.

Mrs. McCall was born September 24, 1925, a daughter of the late Homer and Mentoir Worley Bagwell. She graduated Tri-County Technical College, receiving her LP degree and retired from the Pickens Co. Health Dept. and was formerly a nurse at the Easley Hospital. Mrs. McCall was first married to the late Claude Byrd and was the last surviving member of her immediate family.

Surviving are a son, Rev. Roger Byrd of Jonesville and several nieces and nephews. She was predeceased by an infant daughter, Bobbie Jean Byrd.

Funeral services will be held 3:00 PM Friday, May 15, 2015 at the Easley Church of God conducted by Rev. David Sustar and Rev. Rogers Childers. Burial will be Hillcrest Memorial Park in Pickens.

Visitation will be held 1:30 until 3:00 PM at the church prior to the services.

The family will be at the home of her son, Rev. Roger Byrd, 621 Forest St.,
Courtesy Of Holcombe Funeral Homes.
She was buried at Hillcrest Memorial Park, Pickens, Pickens County, South Carolina.

A native of Greenville, South Carolina, he was the son of the late Homer Lester Bagwell, Sr and Mentora (Worley) Bagwell.

Funeral services were held Tuesday, May 20, 2003 at Fairforest Church of God, conducted by the Revs. Terry Sherfield, William "Bill" Waters, and Jerry Chitwood.

a graveside service will be 10:00 a.m. Friday, May 25, at Morse Cemetery in Buna. There will be no visitation prior to services.

Born February 26, 1949, in Winnfield, LA to Buford and Betty Ray Bagwell, he had lived most of his life in Buna and was a retired truck driver. 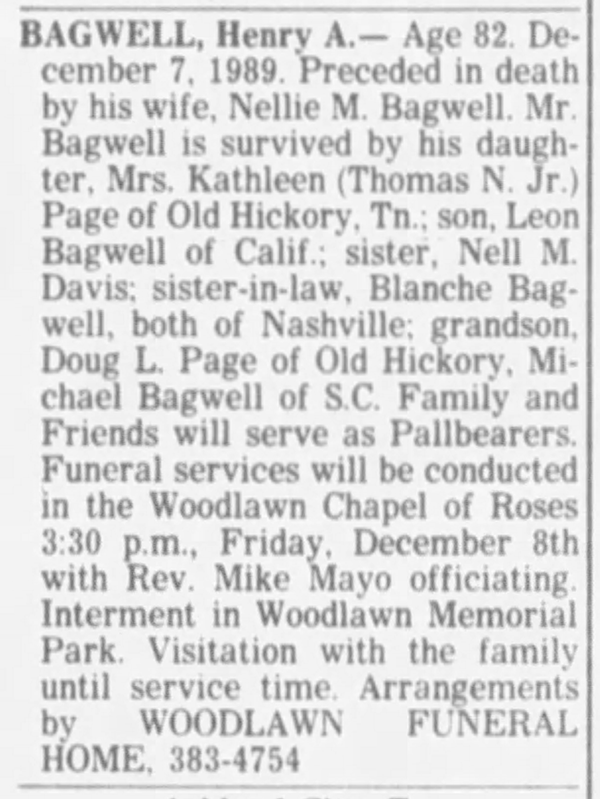 Children of Henry Allen Bagwell and Nellie May Gentry

Children of Nellie May Gentry and Henry Allen Bagwell