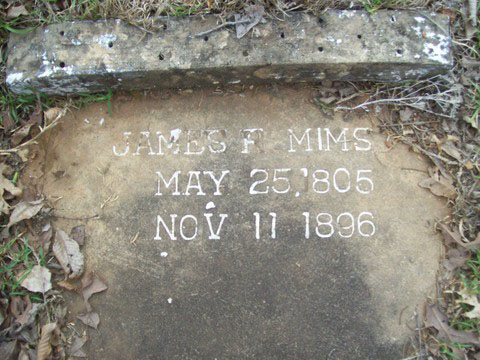 The 31st Alabama Infantry Regiment was organized at Talladega, 16 March 1862, with men from Calhoun, Cherokee, Montgomery, Randolph, Shelby, and Talladega counties. It reported to Gen'l Danville Leadbetter at Chattanooga shortly after. It then moved up to Knoxville, where it was brigaded under Gen'l Seth Barton, in Carter Stevenson's Division. The regiment was at the investment of Cumberland Gap, and it took part in the fight at Tazewell. With Gen'l E. K. Smith's column, it was in the Kentucky Campaign, without coming up with the enemy. When the forces came back, it was permanently brigaded with the 20th, 23rd, 30th, and 46th Alabama regiments, under Gen'l Edward D. Tracy of Madison, Department of Mississippi and East Louisiana. In December, the 31st accompanied Stevenson's Division to Vicksburg. In May 1863 it helped defend Port Gibson, Mississippi, where the regiment suffered severely. It fought at Baker's Creek, and the loss was heavy. As part of the Vicksburg garrison, the regiment suffered through the siege, and after losing a number killed and wounded, it was surrendered with the fortress. Placed in parole camp at Demopolis, the 31st was soon exchanged. With Gen'l Edmund Pettus in command of the brigade, the regiment joined the Army of Tennessee, and it was engaged with slight loss at Mission Ridge. It wintered at Dalton, and it participated in the campaign from Dalton to Atlanta. The regiment followed Gen'l John Bell Hood into Tennessee and sustained severe losses at Columbia and Nashville, and was the rear-guard of the retreating army. Transferred to North Carolina, the regiment was hotly engaged at Bentonville, and a fragment of the 1100 with which it entered the service surrendered at Greensboro, as part of Pettus' Brigade. There were 260 effectives in January, 1863, with 21 k and 37 w at Vicksburg. There were 23 casualties at Chattanooga, and in December, 1863, there were 452 present with 323 arms. Only 180 were fit for duty in January 1865, and less than 100 surrendered in April. Toward the close of the war, the 31st was consolidated with the 23rd and 46th Infantry and redesignated the 23rd Consolidated Infantry Regiment at Smithfield, 9 April 1865. Elijah Mims lived on 11 November 1896 in Chilton County, Alabama.2 He died on 14 March 1908 at age 81.1 He was buried at Collins Chapel Baptist Cemetery, Thorsby, Chilton County, Alabama.1 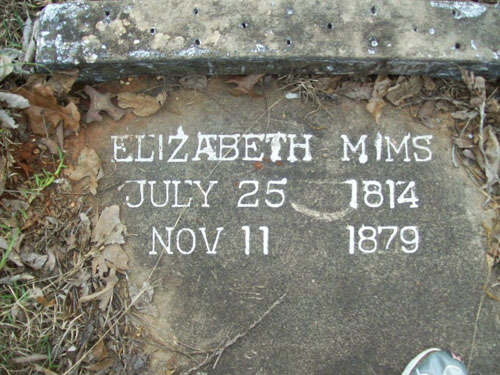 F, b. circa 1851
Margaret DuBose Mims was born circa 1851 in Alabama. She was the daughter of James R. Mims and Elizabeth Barber.

F, b. circa 1845
Martha Ann Virginia Mims was born circa 1845 in Alabama. She was the daughter of James R. Mims and Elizabeth Barber.

F, b. 1850
Martha Emily Mims was born in 1850 in Chilton County, Alabama. She was the daughter of Elijah Mims and Millite Lethia "Millie" Goodgame.

M, b. circa 1748, d. 27 June 1791
Salathiel Goff was born circa 1748 in Maryland.1 He was the son of Thiel Goff and Hannah Turton.1 He enlisted in the 15th VA Regiment of the Continental Line at Romney VA in the Revolution and served as Captain of VA Militia for six months in 1781, 1782 and 1783.1 Salathiel Goff married Elizabeth Sheredine Gray, daughter of John Gray and Ann "Nancy" Broome, on 26 April 1778 at Calvert County, Maryland.1 Salathiel Goff died on 27 June 1791 in St. George, Randolph County, West Virginia.1

Mary A. Hildreth was the daughter of William C. Hildreth and Milly Unknown.