F, b. 1845, d. 1935
Amanda Malvinia Collins was born in 1845.2 As of 24 July 1877,her married name was Bagwell. She married Emanuel York Bagwell, son of Wiley Bagwell and Mary Polly York, on 24 July 1877 at Tuscaloosa County, Alabama.1 Amanda Malvinia Collins died in 1935.2 She was buried at Cripple Creek Cemetery, Samantha, Tuscaloosa County, Alabama.2

F, b. 13 March 1813, d. 1898
Rhoda Corley was born on 13 March 1813 in Gwinnett County, Georgia, (I beleive her tombstone is incorrect for her birthdate. On the 1850 US Census, she is 7 years younger than her husband and the birthdate on the tombstone is same as his tombstone birthdate).1,2 She was the daughter of Curtis Corley and Mary Hudman. As of 26 September 1836,her married name was Bagwell. Rhoda Corley married Redmond Reed Bagwell, son of John Daniel Bagwell and Rachel Chamblee, on 26 September 1836.1,3,4,2 Rhoda Corley was buried at Woodham Cemetery, Dale County, Alabama.2 She died in 1898 in Dale County, Alabama.1,2

Nancy and John Whitson had two children, one of whom died in infancy. Their daughter, Susie Whitson, was born in July 1882. The month before Susie's birth, Thomas Whitson died, leaving Nancy a widow with five children under the age of nine. Nancy never remarried.

Susie Whitson married Eugene Byrd Day in Alabama in 1900. Nancy lived with them for the remaider of her life, helping to raise seven grandchildren. The family moved from Alabama to Texas in about 1905 and then to Oklahoma in about 1921. She died in Oklahoma City on May 25, 1936.1
She was buried at Memorial Park Cemetery, Oklahoma City, Oklahoma County, Oklahoma.1 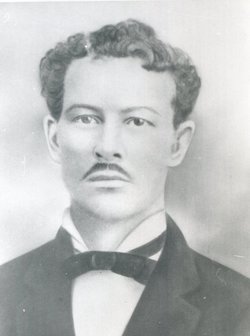 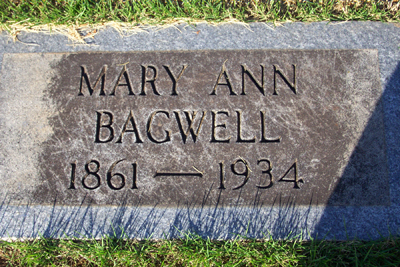 Mrs J M Whitson, 82-year-old Lutie woman, died at her home there Saturday, May 18, after a serious illness of nearly eight months duration. She had lived in that community for 33 years and was one of its oldest and most beloved residents.

Funeral services were conducted Monday afternoon at the Church of Christ in Wellington, with Minister Loyd Smith of Lawton, OK, in charge. Pall bearers were Paul Starr, Ray Hyman, Selba Rainey, Gene Glenn, I 0 Ruby and Elmer Hiett. Hymns were "On Jordan's Stormy Banks", "Where We'Il Never Grow Old", "God Will Take Care of You," and "Safe in the Arms of Jesus."

Burial was in the Wellington cemetery with the Ellis Funeral Home in charge.

Mrs Whitson was before her marriage Susie Caroline Bagwell, the daughter of Euphamia nnd Wiley G. Bagwell. She was born in Alabama on May 12, 1864 and observed her 82nd birthday on Mothers Day. Mrs Whitson grew up in that state and was married there to J M Whitson December 21, 1879. Ten children were born to that union, all of whom survive.

They continued their residence in Alabama for many years, during the time their children we're young. Then, in 1913, they left Tuscaloosa, where they had resided for a considerable period of time and came to Collingsworth County. They settled in the Lutie community which they made their home from that time on.

Devoted alike to her home, family and friends, Mrs Whitson drew about her many who relied on her for guidance and inspiration and comfort. Despite her advancing years, she remained young in spirit as well as in actions.

Mrs Whitson obeyed the Gospel in 1884 at Flatwood, Alabama and was a faithful member of the Church of Christ from that time on. At the time of her death, she was a member of the church at Wellington. She was active in church work for as long as she was able and contributed much to the religious life of her community.

John Guinn was born in 1707 in Augusta County, Virginia. He married Sarah Harper.

Sarah Harper was born in 1711 in Augusta County, Virginia. Her married name was Guinn. She married John Guinn.