F, b. 1911, d. 1953
Ollie Virginia Hill was born in 1911.1 As of before 1930,her married name was Bagwell. She married Ennis Theodore Bagwell, son of Andrew Jackson Bagwell and Birdie V. Martin, before 1930. Ollie Virginia Hill died in 1953.1 She was buried at Big Creek Cemetery, Williamston, Anderson County, South Carolina.1 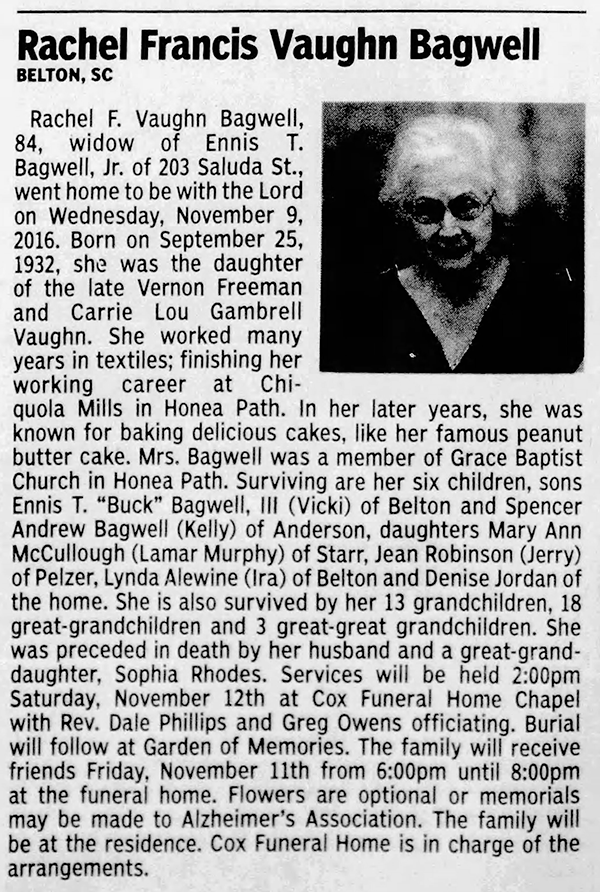 Dwayne was born December 13, 1963 in Springfield. He was a machine operator for Berry’s in Old Hickory, which was formerly Dupont/ReMay. He enjoyed golfing and watching sports, especially the Vols and Titans. Dwayne’s favorite pastime was spending time with his Boston Terrier and best friend, Mugg, who he often shared his cheese puff snacks with. Dwayne is survived by his wife: Karen Norris Bagwell of Greenbrier, his son: Brian (Lexi Hanes) Tinch of Cookeville, his daughter: Autumn (Bradley Nicholas) Tinch of Cookeville, his parents: Robert Joe and Faye Eden Bagwell of Greenbrier, his sister and brother-in-law: Angie and John Martin of Greenbrier, his nephew: Justin Martin of Greenbrier, and by the one that out ranked everyone and everybody, his Boston Terrier - Mugg.

If so desired, the family request memorial contributions be made to your favorite local Animal Shelter or to the American Cancer Society.
He was cremated after 16 March 2019.


Jan Bagwell, 83, of Eastland, passed peacefully from this life on Wednesday, October 27, 2021 at her home.
Holy Mass will be at 12:00 PM, Wednesday, November 3, 2021, at St. Rita's Catholic Church, Ranger, Texas. Burial will follow at Evergreen Cemetery, Ranger, Texas. Arrangements are under the direction of Edwards Funeral Home of Eastland.
Janice Ann Stepan was born on June 3, 1938, to Anton Stepan and Anne Pauline Bobence in Soudan, Minnesota. She was a graduate of Tower-Soudan High School and McConnell Airline School. She worked for Continental Airlines in Chicago, where she met her love, Gerald Bagwell. They married in Irving, Texas in 1962 and had one daughter, Kelley in 1963. They settled in Euless, Texas until 1972, then spent the next ten years in Lubbock, Texas. In 1982, they moved to Eastland, Texas where Jan was employed and retired from Eastland National Bank where she was a bank teller and mainly worked the drive-through. Her line was often long, as people waited for her cheerful greeting and beautiful smile. Her outgoing, upbeat personality would make your day. She never met at stranger! Jan was proud of her Slavic heritage and loved her Polka Music! Her beauty was obvious from the outside, but her inner beauty is what made Jan special. She was a selfless, loving wife, mother and friend. She will be missed by many. She was preceded in death by her husband: Gerald.
She is survived by her daughter: Kelley Bagwell Everett and husband Dell, of Galveston; brother: Tony Stepan and wife, Cindy of Killeen; one grandchild: Kaelin Adell Everett; and cousins, nephews, and niece.
She was a member of Our Lady of the Holy Rosary Catholic Church.
Holy Mass will be at 12PM, Wednesday, November 3, 2021 at St. Rita's Catholic Church in Ranger, Texas. Burial will follow at Evergreen Cemetery in Ranger. Arrangements are under the direction of Edward's Funeral Home of Eastland.
Jan's final words to all is "HAVE FUN and PLAY POLKA!"


She was buried on 23 November 2021 at Evergreen Cemetery, Ranger, Eastland County, Texas.