F, b. 19 August 1931, d. 6 November 2009
Elizabeth Grooms was born on 19 August 1931 in Dumas, Moore County, Texas. As of May 1949,her married name was Bagwell. She married Joseph Harold Bagwell, son of William King Bagwell and Bessie Jane Farley, in May 1949. Elizabeth Grooms died on 6 November 2009 in Amarillo, Potter County, Texas, at age 78
Elizabeth Bagwell, 78, passed away Friday, November 6, 2009 in Amarillo. Graveside services will be held at 2:00 PM, Monday, November 9, 2009 at Northlawn Memorial Gardens with Rev. Jerry Howe, pastor of First Baptist Church officiating.

Elizabeth Bagwell was born August 19, 1931 in Dumas to Homer and Katherine Grooms. In May 1949, she married Joe H. Bagwell in Dumas and he preceded her in death on August 6, 1980. She had lived in Dumas all of her life and was a member of First Baptist Church.

Survivors include; daughters, Diane Hamrick and husband, Dave of Amarillo and Janet McVicker of Dumas; her brothers, Dwayne Grooms of Colorado Springs, CO. and Homer D. Grooms of Jacksboro; her sister, Anita Necessary of Keani, AK; 4 grandchildren and 7 great-grandchildren. 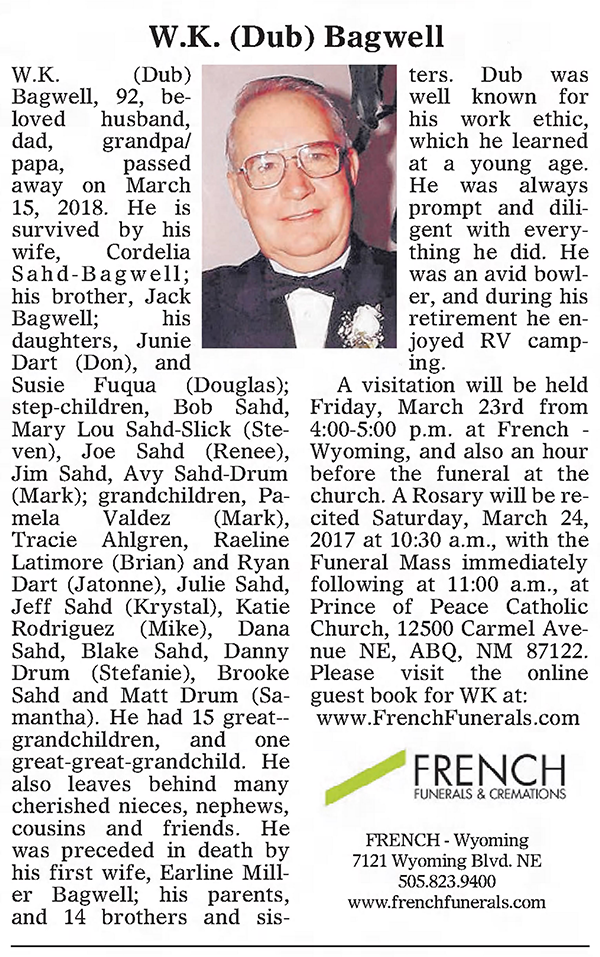 F, b. 26 November 1926, d. 1 February 1989
Edith Earline Miller was born on 26 November 1926. As of after 1945,her married name was Bagwell. She married William King Bagwell Jr., son of William King Bagwell and Bessie Jane Farley, after 1945. Edith Earline Miller died on 1 February 1989 at age 62. She was buried at Sunset Memorial Park, Albuquerque, Bernalillo County, New Mexico.

Eric Thomas Bagwell, age 25 of Huntsville passed away March 25, 2019.
He is survived by his parents Jeff and Mary Bagwell; brother Brian Bagwell; grandfather Gordon Crow; and grandparents Dale and Sandy Bagwell.
Eric was a graduate of the University of Alabama, a U.S. Army veteran (Operation Enduring Freedom), and an employee with Warren Averett.
Visitation is Thursday, March 28, 2019, 12:00 p.m. - 2:00 p.m. at Berryhill Funeral Home followed by the funeral service at 2:00 p.m. officiated by Brother Tim Cole. Burial will be in Maple Hill Cemetery.
Information provided by Berryhill Funeral Home, Huntsville, Madison County, AL.
He was buried at Maple Hill Cemetery, Huntsville, Madison County, Alabama.

M, b. circa 1870
Hickman Speller Simmerman was born circa 1870 in Wytheville, Virginia. He married Anna Claude Bagwell, daughter of Lieutenant Edmund Robinson Bagwell and Margaret Douglas, on 27 September 1898 at Onancock, Virginia.

Born in Wynne, AR to Leonard and Virginia (Stark) Bagwell on July 31, 1948 our beloved husband, father and Papa left us to follow on to another journey on Thursday, June 26th 2014.

On September 7, 1968 he married Sandra ( Dodge) in which they would have celebrated 46 years together. He proudly served his country in the Army including the Vietnam era.

Leon has coached midget basketball for four years, Little league baseball for 10 years, indoor floor hockey for 18 years and was the assistant Varsity softball coach at Buchanan High school for the last 25 years. He had many happy memories and stories in all of his coaching years. All his "kids" touched a special place in his heart. He loved them all!

He also has been a devoted employee for 42 years at National Standard in Niles. Everyone that knew him knows his love for the University of Michigan. Go Blue!

Pre deceased before him are his parents Leonard and Virginia, brother Charlie and nephews Craig Bagwell and Sam Reagan.

The family would like to thank the nurses and staff at both Niles and St. Joseph Lakeland Regional Hospital and a special thank you to Hospice at Home for all of the excellent care he was given in his short time with them.

Visitation will be held at the Swem Chapel in Buchanan, Michigan on Monday, June 30th from 4:00 pm – 8:00 pm. The funeral service will be held on Tuesday, July 1st at 11:00 am with military rites by American Legion Post # 51.


Charles was born to Leonard and Virginia (Stark) Bagwell. He married Corliss Zanini on August 22, 1970 in Michigan.

Mr. Bagwell is survived by his wife Corliss of Havana, two daughters, Carla Bagwell and Christine Kane, both of Havana, one son, Clint Bagwell of Oklahoma and four grandchildren, Chandelor and Cassidy Bagwell and Madaline and Olivia Kane, all of Havana. Also surviving are two brothers, Leon (Sandy) Bagwell and Johnny (Merri) Bagwell, both of Buchanan, MI. He was preceded in death by his parents and one son Craig.

He was preceded in death by his parents and one son, Craig.

He currently worked for FPS in Havana, where he had been employed for the past 24 years.

Mrs. Bagwell died December 27, 2002 at Vaiden Community Living Center in Vaiden. She was a seamstress and a member of First Baptist Church in Winona.

Survivors include a host of nieces and nephews.

Mrs. Bagwell was preceded in death by her husband, William Hester Bagwell.