F, b. circa 1868
Elizabeth E. Bagwell was born circa 1868 in Tennessee. She was the daughter of Littleton Rufus Bagwell and Mary Jane Brown.

Children of Alexander A. Bagwell and Nancy Dinkins

Children of Nancy Dinkins and Alexander A. Bagwell

M, b. 15 February 1846, d. 15 November 1920
Alexander Bagwell was born on 15 February 1846 in Stewart County, Tennessee.1 He was the son of Alexander A. Bagwell and Nancy Dinkins. Alexander Bagwell married Viola Reese. Alexander served as a Private in Company G, 14th Regiment, Tennessee Infantry, Confederate States of America.
14th Infantry Regiment was formed at Camp Duncan, near Clarksville, Tennessee, in May, 1861, with eleven companies. However, Company F disbanded in May, 1863, and 32 men transferred to Company E. Its members were recruited in the counties of Montgomery, Robertson, and Stewart. Ordered to Virginia, the regiment participated in Lee's Cheat Mountain Campaign and for a time served under T.J. Jackson. Later it was attached to General S. R. Anderson's, Hatton's, Archer's, and McComb's Brigade. The 14th was prominent in many conflicts of the Army of Northern Virginia from Seven Pines to Cold Harbor, then was active in the long Petersburg siege south of the James River and the Appomattox Campaign. It sustained 84 casualties during the Seven Day's Battles, 33 at Cedar Mountain, 48 at Second Manassas, 59 at Fredericksburg, and 35 at Chancellorsville. Of the 220 engaged at Gettysburg, over fifty percent were disabled. The unit surrendered 6 officers and 34 men. Its field officers were Colonels William A. Forbes and William McComb; Lieutenant Colonels Nathan Brandon, Milton G. Gholson, G.A. Harrell, and James W. Lockert; and Majors James H. Johnson and Nathan M. Morris. He died on 15 November 1920 in Stewart County, Tennessee, at age 74 of Diabetes Mellitus.1 He was buried at Bagwell Cemetery, Indian Mound, Stewart County, Tennessee.1

F, b. 1850
Jeraldean Bagwell was born in 1850. She was the daughter of Alexander A. Bagwell and Nancy Dinkins. Jeraldean Bagwell married A. Rees on 30 September 1886 at Stewart County, Tennessee.

M, b. circa 1848
A. Rees was born circa 1848. He married Jeraldean Bagwell, daughter of Alexander A. Bagwell and Nancy Dinkins, on 30 September 1886 at Stewart County, Tennessee. 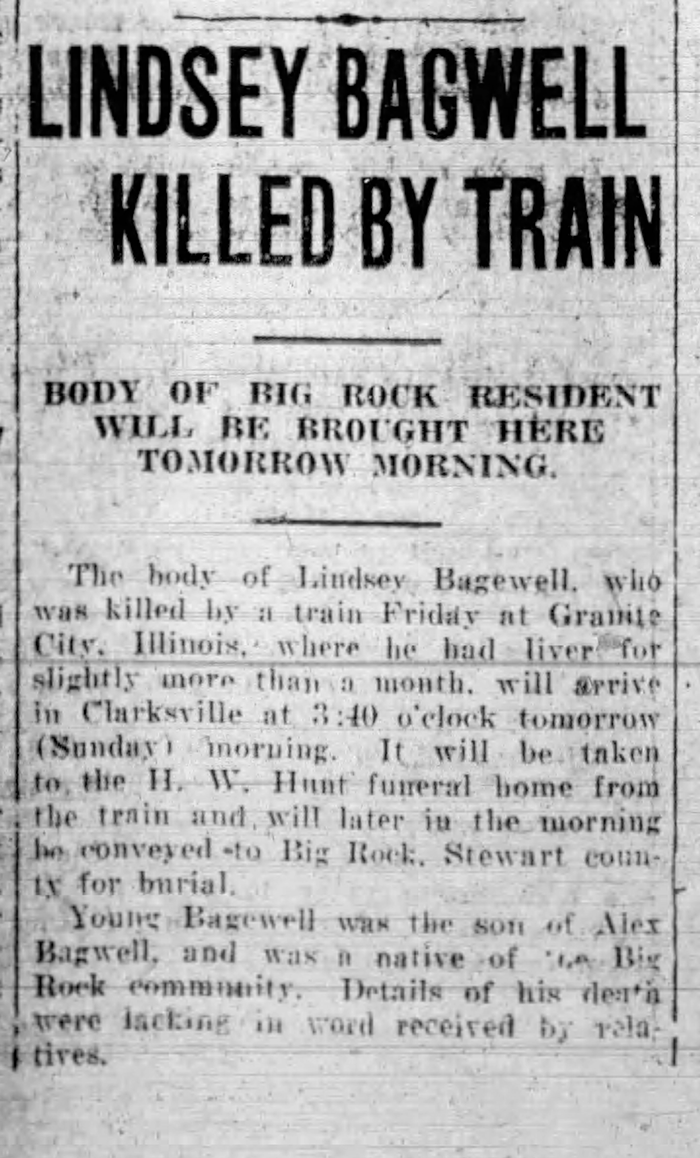