Christopher Ryan Bagwell, 32, passed peacefully on Thursday, Feb. 4, 2016. Funeral: 11:30 a.m. Saturday, Feb. 13, at Winscott Road Funeral Home, 1001 Winscott Road, Benbrook. Chris was born April 19, 1983, in Midland to JoAnn and Don Bagwell. He graduated from Lee High School and attended Southwest Texas State. Chris will be missed in ways he never would have believed and forever loved by many. Despite many challenges, he never lost his love for life, people and special occasions. Chris had a generous heart, an artistic spirit, great intelligence, insightful wit, and an unrivaled love of movies. Chris was preceded in death by his maternal grandparents, George and Ann Shreffler; and paternal grandparents, Howard and Lucretia Bagwell. Survivors: His mother and best friend, JoAnn Bagwell; father, Don Bagwell; brothers, Brian and Stephen Bagwell; beloved nephew, Pierson; aunt, Tina Shreffler; and many other relatives and friends.
Published in Star-Telegram on Feb. 10, 2016.

Stephen Brant Bagwell is the son of Donald Howard Bagwell and JoAnn Shreffler.

Rayma Rogers, age 87 of Tomball, passed away May 11, 2020. The Addison family and staff of Magnolia Funeral Home extend condolences to her family during this difficult time.

Rayma D. Rogers passed away at the age of 87 in Tomball, Tx. Rayma was born in Hayrick, Tx. on May 26, 1932, the daughter of Floyd and Charlie Belle Bagwell. She was the sister of three brothers and one sister. Rayma is survived by three children: Patsy Calhoun and her spouse John, William M. and his spouse Vicki, and Kathy Dannenbaum and her spouse Michael. During her lifetime she enjoyed ten grandchildren, eighteen great-grandchildren, and 11 great-great-grandchildren. She loved every single one of them. She is also survived by her sister-in-law, Martha Bagwell.
During her life she had the opportunity to live in Texas, New Mexico, Georgia, Iran, Trinidad, Norway, and Scotland. She enjoyed traveling and learning about the culture of each new country.
Upon returning to Texas, Rayma and Bill settled in Ft. Worth and their final residence was to be outside Tomball, Tx.
Rayma’s biggest joy in life was her family, her church, and Ladies Bible class. Until her stroke you could count on her being at church without fail. She had a strong belief in family and in God. She was also an avid reader. You could always find her reading either Patterson, Grisham, or Coulter. While she was in Scotland, she learned to oil paint and found it to be very relaxing.

Due to COVID 19 restrictions the Visitation and Funeral Service will be private, by invitation only. Burial will take place in Magnolia Memorial Gardens, adjacent to Magnolia Funeral Home. 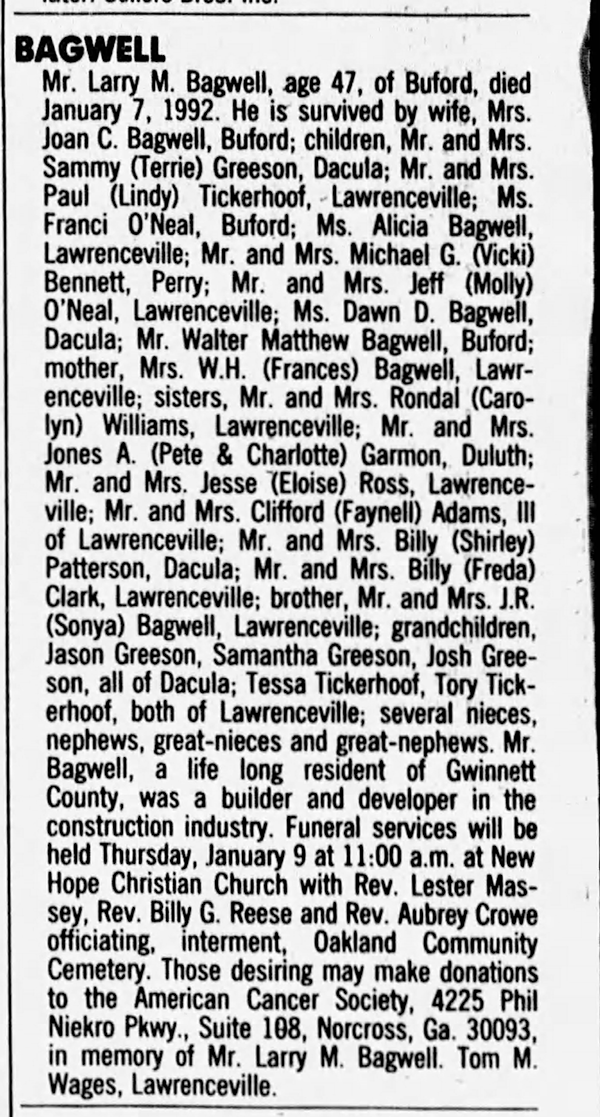