F, b. April 1899
Dollie E. Page was born in April 1899 in Georgia. As of before 1919,her married name was Bagwell. She married Hiram Harry Bagwell, son of George Alexander Bagwell and Lucinda Boyles, before 1919.

James Lyna Bagwell was born on 15 February 1924 in Jackson, Hinds County, Mississippi.1 He was the son of James Ernest Bagwell and Viola A. McClarty. He served as AMI in the US Navy from from 1941 to 1947. James Lyna Bagwell married Lorraine Belle Burkard circa 1944. James Lyna Bagwell died on 17 July 2005 in Sun City, Riverside County, California, at age 81 SUN CITY —— James Lyna Bagwell, 81, died Monday, July 18, 2005, at Sun City Convalescent.

Born Feb. 15, 1924, in Austin, Miss., he lived in Sun City for 15 years. He served in the U.S. Navy from 1941 to 1947, during World War II. He was the owner and operator of a florist shop for 20 years. He was a member of the Kiwanis in Long Beach, a past president of the Lions Club in Canyon Lake and a lifetime member of the Veterans of Foreign Wars.

F, b. 1905, d. 1977
Viola A. McClarty was born in 1905. As of before 1924,her married name was Bagwell. She married James Ernest Bagwell, son of William Love Bagwell and Mollie Elizabeth Harris, before 1924. Viola A. McClarty died in 1977. She was buried at Forest Lawn Memorial Park (Long Beach), Long Beach, Los Angeles County, California.

Children of Viola A. McClarty and James Ernest Bagwell

F, b. 1897, d. 1994
Eva Lee Fields was born in 1897 in Paris, Texas. As of after 1915,her married name was Bagwell. She married Charles Edward Bagwell, son of William Love Bagwell and Mollie Elizabeth Harris, after 1915. Eva Lee Fields died in 1994. She was buried at Forest Lawn Memorial Park (Long Beach), Long Beach, Los Angeles County, California. 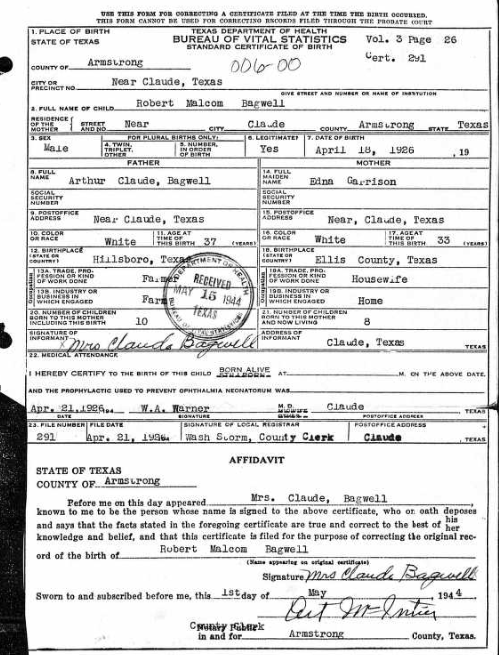 He was the son of Arthur Claude Bagwell and Edna Garrison.1 He was a CPL in the United States Army Air Force during World War II. He enlisted on 1 September 1944 at Oklahoma City, Oklahoma. Robert Malcolm Bagwell married Alice June Lawson on 14 June 1963 at Grayson County, Texas. Robert Malcolm Bagwell died on 5 April 2008 at age 81. He was buried on 9 April 2008 at Fort Gibson National Cemetery, Fort Gibson, Muskogee County, Oklahoma. 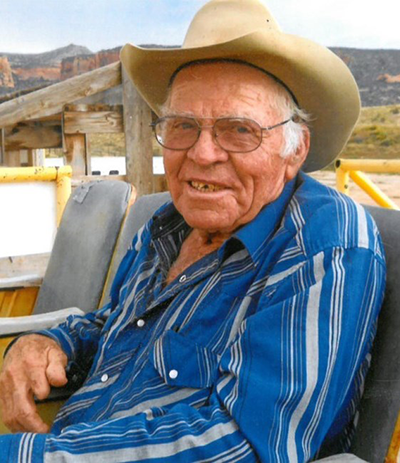 Leonard E. Bagwell was born June 4, 1930 in Claude, TX, to Claude and Edna (Garrison) Bagwell. He spent his childhood and attended high school in West Texas and attended West Texas A&M in Canyon, TX. Leonard was a rancher and horse breeder. He was a member of the Professional Cowboys Association, National Rifle Association, Foundation of Quarter Horse Association, American Quarter Horse Association and Hancock Horse Enterprises, LLC. He loved his family, horses, the rodeo, horse shows, traveling, and hunting. Leonard was a resident of Loma, Colorado for the past 40 years. He is survived by daughters, Kathy McNatt of Loma; Bonnie Brown of Delta, CO, and Lori Anderson of Oklahoma City, OK; 4 grandchildren; and caregiver, Carol Punkoney of Loma. Leonard was 90 years old when he passed away on November 27, 2020 of natural causes, with his family by his side at his home.
--The Daily Sentinel (Grand Junction, CO) Jan. 3, 2021.1 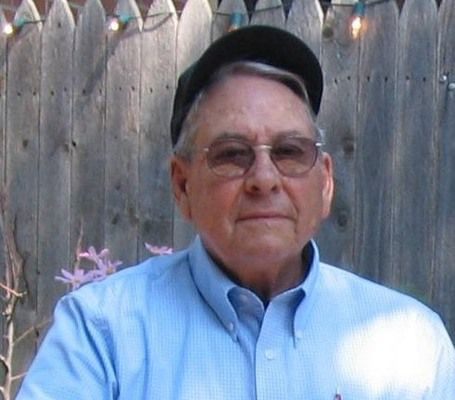 Anyone who knew Leon knows he was quite a character. His life unfolds not as a neat timeline, but as the many stories he always told with a wry smile, now shared through generations of his family. Stories of: Growing up on the Bagwell family farm as the second youngest of 14 children, learning both the value of hard work and the fun of causing mischief and mayhem. Learning to race horses as a young teen on that same farm, which instilled in him a lifelong passion for the sport and no small amount of competitiveness.

Enlisting in the US Air Force to serve his country in the Korean War, being stationed in the Philippines and Japan. Along with his more traditional service, he also played baseball for the US Air Force team with several of the enlisted New York Yankees. Though, he'd tell you he was more proud of the stray chihuahua his unit adopted and named Chisana Tomodachi, which means 'small friend' in Japanese.

Graduating from Claude High School, but being sent home early from the ceremony because of both a tornado nearby and a spooked bat swooping the school principal. Graduating then from Sam Houston State University to teach agriculture in Canyon, though that graduation ceremony was significantly less eventful.

Meeting Nell Dean Bagwell née Knight in 1954 while dancing the Virginia Reel, and soon running off to Tucumcari to marry her. They raised three children together, establishing themselves permanently in Gruver around 1965, where they remained. Nell Dean and Leon were married for 58 years, until her death in 2012.

The Bagwell home in Gruver grew to hold generations of Bagwells, holding dozens if not hundreds of gatherings packed with laughter, love, competitive and wild games, and of Nell Dean's food. The home served as a de-facto center of Leon's life: Next door to the church he gladly offered prayers in for decades. Across the street from the elementary school his own children and grandchildren attended. Near the heart of the town he adored, and built his life in and around.

Leon's life story(ies) taught his family the real value of life: connection and joy, mischief and fun, discipline and duty, and pride of accomplishment. Though he will be deeply missed, his family is grateful that he and his wife are finally reunited. He had missed her so very much.

Leon was preceded in death by his wife, Nell Dean.


He was buried on 20 December 2021 at Gruver Cemetery, Gruver, Hansford County, Texas.

M, b. 27 August 1916, d. 24 July 1943
Floyd Lemon Bagwell was born on 27 August 1916 in Herrin, Williamson County, Illinois. He was the son of Jack Albert Bagwell and Hattie Mae Gore. Floyd Lemon Bagwell lived in 1943 in St. Louis, Missouri. He died on 24 July 1943 in St. Louis County Hospital, St. Louis County, Missouri, at age 26 of a motorcycle/truck, head-on accident. He was the driver of the motorcycle. He was buried at Campbell Hill, Illinois.