M
Jay Bagwell is the son of Gerald Eugene Bagwell.

F
Anna Bagwell is the daughter of Gerald Eugene Bagwell. 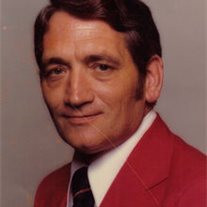 
Charles William Bagwell, age 78 of Kuttawa, died at 4:15 am Sunday, September 11, 2011 at Western Baptist Hospital in Paducah. He was a member of Reidland United Methodist Church and an Army Veteran. He was preceded in death by one brother Robert Earl Bagwell, one sister Carol Ann Bagwell and his parents Kenneth and Lallie Wray Bagwell. Survivors include his wife of 55 years Jean Elizabeth Pilgrim Bagwell, one brother Kenneth Ray Bagwell of Gulf Port MS, one sister Kay Bagwell Eastland of Doddsville, MS, two daughters Cindy Bagwell of Oxford, MS, Tere Bagwell Johnston of Kuttawa, three grandchildren Charles Lucian Johnston of Kuttawa, Albert William Bagwell of Oxford, MS, Ann Bagwell Cox of Oxford, MS, two great grandchildren and several nieces and nephews. Funeral services will be held at 11:00 am Tuesday, September 13, 2011 at Dunn's Funeral Home with Rev. Linda Creason officiating and burial to follow at Hebron Cemetery in Eddyville. Friends may call from 4:00 to 8:00 pm Monday at Dunn's Funeral Home in Eddyville.

Carol Ann Bagwell was born on 2 November 1945. She was the daughter of Kenneth Leonard Bagwell and Lallie Wray. Carol Ann Bagwell died on 6 July 1947 at age 1. She was buried at Poplar Creek Nations Cemetery, Kilmichael, Montgomery County, Mississippi.


Jean Bagwell born in Memphis, TN on January 30, 1937 and passed away September 13, 2021. She was preceded in death by her parents James and Lois Pilgrim, her husband Charles Bagwell, daughter Cynthia Bagwell and grand daughter Anne Cox. She is Survived by her daughter Teresa (Jeff) Byers, three grandchildren, two great grandchildren and several loved and cherished friends and neighbors of the Iron Hill Community, She had a close relationship with the Lord. She loved music and hymnals and in the later part of her life she discovered a love and talent for painting, She enjoyed fishing and being on the lake with family and friends. There will be a graveside memorial service on Friday, September 17, 2021 at 9:00 a.m. at Hebron Baptist Church Cemetery for family and close friends to remember and celebrate her life.