Jann Bagwell is the daughter of James Ellis Bagwell Bagwell and Marie Corder.

Deanna Bagwell was born after 1956. She was the daughter of James Ellis Bagwell Bagwell and Marie Corder. Deanna Bagwell died before 6 June 2013.

BATESBURG - Services for Mary C. "Connie" Maroney, 73, will be held at 3 p.m. Monday, January 13, 2003 at West Creek Baptist Church with the Rev. Earl Alford officiating. Pallbearers will be Randy McCormick, Matt Rodgers, Davey Brunson, Thomas Edwards, Bobby Goff and Frank Maroney. Burial will be in Ridge Crest Memorial Park. The family will receive friends from 6-8 tonight at Milton Shealy Funeral Home and other times at the residence. Memorials may be made to the West Creek Baptist Church Building Fund, Rt. 1 Box 231, Batesburg, SC 29006.
Mrs. Maroney, wife of the late Boyd Maroney, died Friday, January 10, 2003. Born in Hickory Tavern, she was a daughter of the late Milton Outz and Fair Bell Davenport Bagwell. She was a retired textile employee. Mrs. Maroney was a member of Amick Grove Pentecostal Holiness Church and the Willing Workers Sunday School Class at West Creek Baptist Church.
Surviving are sons and daughters-in-law, Jerry and Beth Maroney, John and Peggy Maroney, David and Kathy Maroney, all of Batesburg; daughters and sons-in-law, Judy and Bryson Cockrell of Batesburg, Brenda and Randy McCormick of Pelion; brother, James "Red" Bagwell of Batesburg; stepson, Ken Miles of Batesburg; stepdaughter and son-in-law, Debbie and Gary Gregory of Gilbert; 14 grandchildren; 12 great-grandchildren. She was preceded in death by son, Phillip Maroney.1
She was buried at Ridge Crest Memorial Park, Batesburg, Lexington County, South Carolina.1

F, b. 1903
Margie L. Defoor was also known as Margie Defore. She was born in 1903 in Alabama. As of 8 May 1926,her married name was Bagwell. She married Thomas Buford Bagwell, son of Clayton Alexander Bagwell and Eula Viola Ogletree, on 8 May 1926 at West End, Jefferson County, Alabama.


BAGWELL, JAMES KENNETH, age 61, of Clay, passed away June 9, 2008. He was a graduate of Auburn University in 1969, and served in the US Army. He was preceded in death by his father James C. Bagwell. Services will be Wednesday, June 11, 2008 at 12pm in the Chapel with burial in Forest Hill Cemetery. Dr. Tim Lovett officiating. Visitation will be from 11am until 12pm Wednesday. He Is survived by his daughter, Kara Haddock of Trussville; son, Kevin Bagwell of Birmingham, mother, Mrs. James C. Bagwell of Birmingham. In lieu of flowers, make donations to the Leukemia and Lymphoma Society. Jefferson Memorial Trussville directing.1 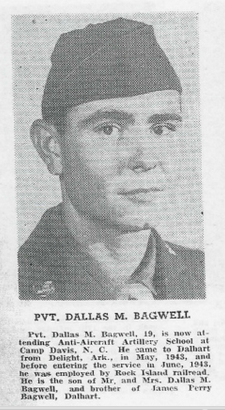 Maggie Bagwell is the daughter of Warren Dixon Bagwell and Marion Elizabeth Harris.