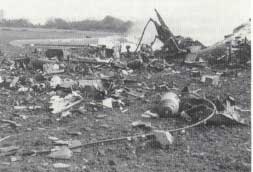 Technical Sergeant Emmett D. Bagwell was born on 5 June 1912 in Mississippi. He was the son of John D. Bagwell and Mamie Woods. He enlisted in the US Army in 3 November 1942 at Camp Shelby, Mississippi. He was part of the the 446th Bomb Group, who came to be known as "the Bungay Buckaroos" after the name of their Suffolk base, flew B-24 Liberators on strategic, support and interdictory missions over Europe.

He was the Top Turret Gunner of a B-24 Liberator bomber was known as the "Dragon Lady". Technical Sergeant Emmett D. Bagwell died on 27 April 1944 in RAF Flixton, Suffolk County, England, at age 31 He was in the 446th Bombardment Group, 704th Bomb Squadron (H) and was Killed in Action in a crash.

The 704th Bombardment Squadron was first activated in 1943. After training in the United States with Consolidated B-24 Liberators, it deployed to the European Theater of Operations, where it engaged in the strategic bombing campaign against Germany.

The details of the crash are extracted from the Misson Reports in History, 446th Bombardment Group (H), March and April 1944:

"Ten of our aircraft, of 13 assigned, attacked the MPI, a roundhouse in the Blainville marshalling yards [Railroad Yards], with good results, and flak at the target was no deterrent. The mission was a tragic one for the Group, however, since two more planes and crew crashed."

The plane of Lt. Wayne Case (42-50306) of the 704th Squadron crashed and burned on the field while attempting to take off on their 2nd mission with its 12 x 500 lbs bomb load. All ten members of the crew and the two RAF enlisted men in the radar shack were killed in the crash.

Members of crew who were serving with T/Sgt. Phillips are extracted from History, 704th Bomb Squadron (H), March and April 1944 included:

-------------
Account of crash on Thursday, 27 April 1944 at 3:55 pm.
Emmett Bagwell, T/SGT, Flight Engineer and Top Turret gunner of the above B-24F Bomber was a personal friend. He was the best basket ball player in our Walnut Consolidated High School, Vance, MS. His sister, Francis, was a classmate of mine.

Strong winds were blowing at Take Off when the wind direction changed by 90 degrees, causing the B-24F to crash at the end of the runway, demolishing a Radar shack and killing two RAF Brits, whereupon the plane caught fire and six bombs exploded. I have photos of the wreckage which totally demolished the plane. What is left of the plane doesn’t even resemble a plane. Bodies of the ten crew members were strewn over the entire crash area, with not enough left to send home.

It is interesting that another B-24 crashed on the same date and that my friend, Emmett Bagwell, was killed on each plane?? The second plane was # 42-7610.

Emmett’s plane was bound for Blainville, France. Further data on the crash is given below:
446th Bombardment Group
20th Combat Wing
2nd Air Division
8th USAAF
Station 125, Flixton, England
The 446th was known as “The Bungay Buckaroos”
Their Motto: Voler Venger Vaencre, which means: Fly, Avenge, Vanquish.
456 crew members were killed, 1943 – 1946
Further Notes:
The 446th BG (Heavy) was activated 1 April, 1943 from Davis Monthan Field, Tucson, AZ. They trained at Lowry Field, Denver for overseas duty and departed 18 Oct. 1943 for Europe.
They set up a permanent field at station 125, Flixton, UK in Nov. 1943
They began operations on 16 Dec. 1943 with a raid against Bremen, Germany, and flew the last against Salzburg on 26 April 1945.
They flew 273 missions between those dates losing 58 aircraft in battle, and 28 others from non-battles with 447 men killed in action.
They dropped 16,818.95 TONS of bombs.
Over 6, 000 airmen served at Flixton AAB during WWII.
The 446th BG won the following Campaign ribbons:
European-African – Middle Eastern Theatre
Bronze Star ETO ribbon
Normandy Campaign
Northern France Campaign
Ardennes – Alsace
Rhineland
Central Europe
Southern France.

Final Note:
I am C. Douglas Caffey, disabled veteran of WWII having served in the 509th BG, 58th Wing in the Pacific with B-29’s. I searched for how Emmett Bagwell died for over sixty years to no avail until the year 2003 when I began an extended search via the NET, and little by little, I finally learned how my friend Emmett Bagwell died.
He was my first friend to die in WWII. I have never forgotten Emmett, the Star basket ball player, nor Emmett, the B-24 Flight Engineer and Top Turret Gunner who gave his life for the cause of FREEDOM!

He was buried at Lambert Cemetery, Lambert, Quitman County, Mississippi.