Sarah E Bagwell was also known as Effie Lee Bagwell. She was born on 11 July 1889. She was the daughter of William Doritha Bagwell and Martha Lou McKinney. Sarah E Bagwell died on 19 May 1891 at age 1. She was buried at Rocky Creek Baptist Church Cemetery, Greenville, Greenville County, South Carolina. 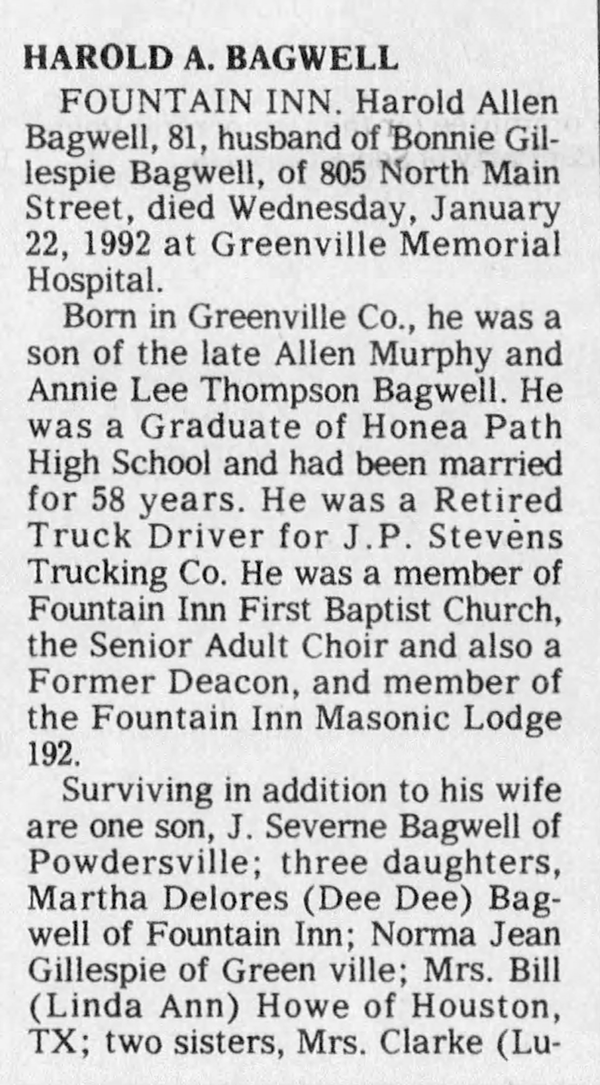 Funeral services were held Friday, October 10, for J. M. (Jesse) Bagwell, who died at his home here Wednesday. Services were conducted by Rev. D. E. Steely and interment was in the Katy cemetery, near Culp.

Mr. Bagwell was born at Strawberry, Lawrence County, Ark. He was 72 years, 8 months and 27 days old.

On the 31st day of March 1891, he was married to Miss Ella Whaley. To this union thirteen children were born, eleven surviving, two having preceded him in death several years ago.

In 1909 he united with the Missionary Baptist church of which he was a very active member. He has lived in and near Calico Rock all his life.


He was buried at Curtis, Izard County, Arkansas.

Mrs. Mary Ella (Whaley) Bagwell died at her home at this place, Tuesday night, February 22, at 10:20 o'clock. Her death was not unexpected, as she had been seriously ill for several weeks. She was 68 years, 4 months and 21 days old.

She was born in this county October 1, 1875 and practically all her life was spent within a radius of a few miles of Calico Rock. After many years residence at Culp, she and her husband, the late Jese M. Bagwell moved to Calico Rock about five years ago. Mr. Bagwell's death occurred in October of 1941.

Mrs. Bagwell was converted in early girlhood and united with the Baptist church. She lived a devout Christian life until called by death. She was the mother of thirteen children, eleven surviving, as follows: Mrs. E. C. White of Ranger, Texas, Bill Bagwell, Mrs. A. W. Teague, Mrs. Minnie Fletcher, Mrs. Albert Branscum and Mrs. Willie Neldon all of Calico Rock; Mrs. Wheeler Pinkston of Winters, Calif., Haywood Bagwell of San Antonio, Texas; Willard Bagwell of Detroit, Mich., Alvin and Lee Bagwell of the U. S. Navy. Also surviving are 36 grandchildren, 16 great-grandchildren, four brothers and one sister and a host of other relatives and friends to mourn her passing. All the children are present for the funeral except Alvin and Lee.

(Please Note: The obituary was copied as printed in the newspaper. Some of the names and addresses are probably misspelled.) She was buried at Curtis, Izard County, Arkansas.

Sylas Preston Knight is the son of Christina Lynn Minor.1

Eliza Jade Knight is the daughter of Christina Lynn Minor.1

Fisher Blaze Minor is the son of John Terry Minor and Cassie Humphrey.1

Megan Nicole Moore is the daughter of Kimberly Louise Minor.1

Joshua Stephen Glover is the son of Kimberly Louise Minor.1