The Battle of Franklin was fought on November 30, 1864, in Franklin, Tennessee, as part of the Franklin–Nashville Campaign of the American Civil War. It was one of the worst disasters of the war for the Confederate States Army. Confederate Lt. Gen. John Bell Hood's Army of Tennessee conducted numerous frontal assaults against fortified positions occupied by the Union forces under Maj. Gen. John M. Schofield and was unable to break through or to prevent Schofield from executing a planned, orderly withdrawal to Nashville.

The Confederate assault of six infantry divisions containing eighteen brigades with 100 regiments numbering almost 20,000 men, sometimes called the "Pickett's Charge of the West", resulted in devastating losses to the men and the leadership of the Army of Tennessee—fourteen Confederate generals (six killed, seven wounded, and one captured) and 55 regimental commanders were casualties. After its defeat against Maj. Gen. George H. Thomas in the subsequent Battle of Nashville, the Army of Tennessee retreated with barely half the men with which it had begun the short offensive, and was effectively destroyed as a fighting force for the remainder of the war.

The 1864 Battle of Franklin was the second military action in the vicinity; a battle in 1863 was a minor action associated with a reconnaissance in force by Confederate cavalry leader Maj. Gen. Earl Van Dorn on April 10.1,4 He was buried at Confederate Cemetery, Franklin, Williamson County, Tennessee.4

29th Infantry Regiment, organized at Corinth, Mississippi, in April, 1862, contained men from Grenada, Lafayette, Panola, Yalobusha, Washington, and De Soto counties. The unit served in Mississippi, then moved to Kentucky where it saw action in Munfordville. Later it joined the Army of Tennessee and was placed in General Walthall's and Brantly's Brigade where it participated in many battles from Murfreesboro to Bentonville. The 29th lost 5 killed and 36 wounded at Munfordville, had 34 killed and 202 wounded at Murfreesboro, and suffered fifty-three percent disabled of the 364 engaged at Chickamauga. It reported 191 casualties at Chattanooga and in December, 1863 was consolidated with the 30th and 34th Regiment and totalled 554 men and 339 arms. This unit reported 5 killed and 22 wounded at Resaca, and in the fight at Ezra Church the 29th/30th lost 8 killed and 20 wounded. Very few surrendered in North Carolina in April, 1865. The field officers were Colonels William F. Brantly and Edward C. Walthall, Lieutenant Colonel James B. Morgan, and Majors Newton A. Isom and George W. Reynolds. Fredric Bagwell died on 16 September 1868 at age 55. He was buried at Shiloh Cemetery, Ackerman, Choctaw County, Mississippi.

Children of Fredric Bagwell and Mary (?)

Children of Mary (?) and Fredric Bagwell

Samuel Bagwell was born circa 1861 in Mississippi.1 He was the son of William Crawford Bagwell and Lucinda (?)1

Rufus Bagwell was born circa 1867 in Mississippi.1 He was the son of William Crawford Bagwell and Lucinda (?)1

Willie Bagwell was born circa 1873 in Mississippi. He was the son of William Crawford Bagwell and Lucinda (?) 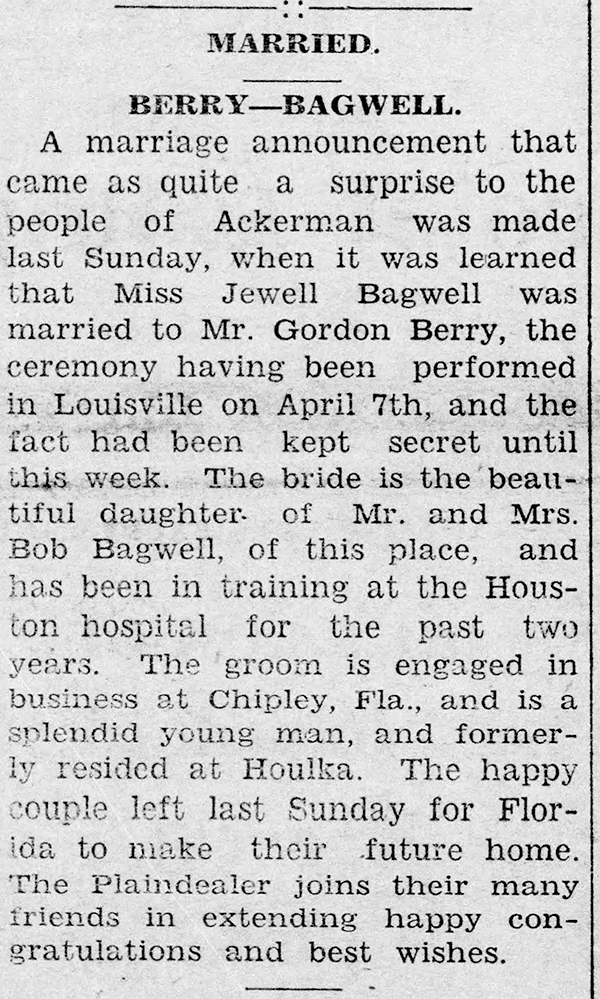