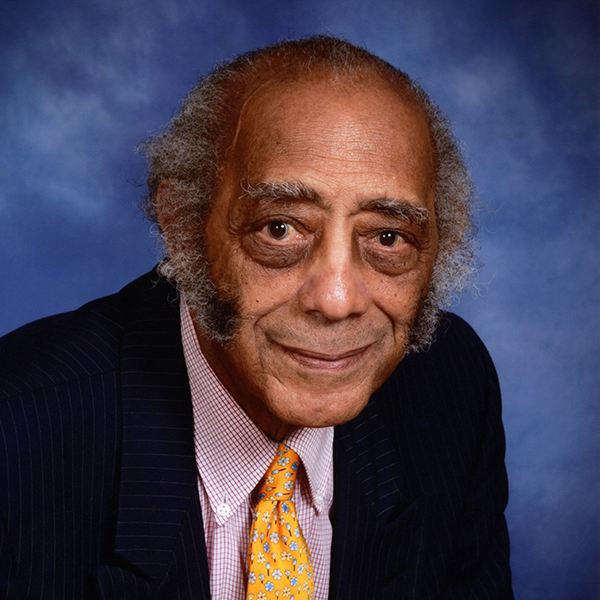 
Edward Adams Bagwell, was born on November 21, 1931, in Harlem, New York, to George Lenard Bagwell and Erminie Adams-Bagwell. He had an older sister, Jackie, and a younger sister, June. The family lived at 267 West 113th Street in Harlem, New York. The Bagwells were long-time members of All Souls’ Episcopal Church, located at 88 St. Nicholas Avenue, New York. The Adams family, including his Mother, eight sisters, and three brothers, immigrated from Bermuda to New York by way of Ellis Island. Growing up with his family and the “aunts” Edward became the beloved boy in the family who was dotted on by all. He often shared stories of being the only boy in Harlem, who wore knickers and carried a violin to school! As a child, Edward spent summers with his paternal family in Accomac, Virginia. Edward was always an innovative thinker. He loved flashlights and electronic gadgets. He often gazed in amazement at the electrical display in the Woolworth Department Store windows on 125th Street. At a young age, he taught Morse code to his younger sister, June, which provided her and their neighborhood friends with a buzzer-signaling system. Edward’s foundation in electronics, math, and blueprint design sharpened while attending Central Commercial High School. Edward served in the United States Marine Corps from January 17, 1952, to February 18, 1954. He received the United Nations Service Medal, Korean War Service Medal, National Defense Service Medal, and a Good Conduct Service Medal. Upon returning home from service, Edward attended Collegiate Institute. He became intrigued with the mechanics of photography and audio engineering. He quickly became known for his 120mm, 4x5 large portrait photography, and 8x10 view camera. Edward’s ability to capture the natural essence of people made him a valuable resource as a photographer covering social-protest activities in support of the Civil Right Movement. n the 1960s, Edward established News Voice International (NVI), located at 110th Street and Lenox Avenue. NVI was a one-stop resource for Black businesses seeking professional photography and sound-system installation services. The office was a hub for the Harlem elite, prominent social activists, and cultural artists. During this time Edward met Lilly and was smitten by her striking natural beauty and intellect. It was love at first sight. Edward began booking her for some of his prominent advertisements. Edward happily embraced Lilly’s two young children Nelson and Sharon. Later, they were married and raised two daughters, Dorinda and Kadesha. Edward was a loving father, fully dedicated to his children, and always incorporated his family into his active career. During the era of Black Empowerment, Edward Bagwell’s photographs were featured in: The National Urban League, National Association for the Advancement of Colored People (NAACP), The Amsterdam News, Time Magazine, Look Magazine, New York Age, Jet Magazine, Ebony Magazine, New York Courier, Saturday Evening Post, Physicians News Service, and the Library of Congress. He produced advertising campaigns for: Johnny Walker Red, Clairol, Coca-Cola Bottling Company, Henry Street Settlement, and The Children’s Television Workshop (Sesame Street). In 1966, Edward was named Photographer of the Year by the Photographers Guild. Edward had extensive knowledge of sound-system installations. He installed and maintained all the original audio and intercom systems in Harlem’s Historic Black Churches: Antioch Baptist Church, Convent Avenue Baptist Church, Salem Methodist Church, Mother AME Zion Church, All Souls’ Church, and La Sinagoga Pentecostal Church. He designed and coordinated all the audio needs for the political tours for Senator Jacob Javits, Senator Kenneth Keating , Secretary of State of New York Basil Paterson, and American civil rights leader Whitney M. Young funeral service to name a few. Under Mayor John Lindsay’s administration, Edward Bagwell was the sound engineer for the 1969 “Harlem Cultural Summer Festival”, which was held throughout the five boroughs of New York City. He set up all the stage productions, grandstands, and light towers for performers like Stevie Wonder, James Brown, and Jimi Hendrix. Edward was also the audio engineer for the Broadway show “Don’t Bother Me, I Can’t Cope” (1972), and he managed community sound events at The Studio Museum for musicians like Babatunde Olatunji. He also was the sound engineer for events at the Audubon Ballroom, Renaissance Ballroom, Rockland Palace, the West Indian American Day Carnival, and,the annual African-American Day Parade grandstand located in front of the State Office Building, which was a highlight for our entire family from the onset until the 1990s. Looking for more space the family moved to a house in The Bronx. Edward discovered that he had a green thumb and diligently groomed the rose bushes, planted annuals, and perennials, and made mean, juicy burgers on the backyard grill! Edward was a kind, humble, and polite man. He was always a sharp, well-dressed gentleman, with a button-down shirt, tie, or an ascot. Edward loved listening to jazz music and would whistle his favorite tunes. He sported a black Tam, carried a newspaper under his arm, and wore a tan overcoat like his favorite detective, Columbo. On Sunday, April 24, 2022, Edward Adams Bagwell, who was 90-years-old, passed away, quietly in his sleep, at the Hebrew Home in Riverdale, New York. While he suffered from Alzheimer’s Disease, he could still sing along to one of his favorite tunes, John Coltrane and Johnny Hartman’s “My One and Only Love”.

M, b. April 1882
Charlie Conner was born in April 1882 in Virginia. He married Mary Bagwell, daughter of Henry R. Bagwell and Martha Jane Blake, before 1912.


October 23, 2016 Dixie Lee Bagwell went to be with her Lord and Savior Sunday, October 23, 2016. Throughout her battle with cancer, she always glorified God and knew her life was temporary and her mission was simple - to love, serve, and make disciples. Dixie is survived by the love of her life, Jack Lynn Bagwell. Also surviving are her three daughters, Robin Grosse and her husband David, Jacque Bagwell, and Samantha Blackwood and her husband Jeff. Her grandson Jonathan Grosse and his wife, Lindsey, and their sons, Carter and Jack; her grandson Brian Grosse and his wife, Stacy, and their son, Crawford; her granddaughter Baylee Blackwood and her son, Beckham; and another grandson, Daegan Blackwood, also survive her. Dixie was born July 17, 1944 in Ellwood City, Pennsylvania to Mildred and C.W. Long. She moved to Texas shortly after where she would soon meet her "gray fox," Jack Bagwell. Dixie and Jack met at a young age through a blind date their mothers arranged. They lost touch for a few years but were later reunited and married April 3, 1965. Together, they raised their three daughters and loved taking them on family trips with their best friends, Carole and Ernie Gibson, and their daughters. In Midland, Texas, they were active members at Temple Baptist (formerly Corinth Baptist), Westside Freewill Baptist, and Kelview Heights Baptist Church where they made many lifelong friends. Like her parents, Dixie loved to sing and used her gift for the Lord, singing in The Romans Road Trio with Vernon Syler, and her daughter Jacque, and later included Marvae Blanscett. The group traveled to sing at various churches and festivals and won "Best Gospel Trio of the Year" at the Brand New Opry in Odessa, Texas. If one thing is certain about Dixie, it's that she absolutely adored her Savior. Almost every conversation she had with anybody led to talking about the Lord and her love for Him. She taught vacation Bible school, Sunday school, and was on Midland Memorial's Shepherd's staff for many years. She loved her Bible study groups, and when she became too weak to do her own, she loved her family to share with her what they were learning in God's Word. Dixie was a fun-loving, goofy, and God-fearing mom to her daughters. Some of her and her daughter's best memories where Saturdays, when they would rush to finish the chores so they could tune into American Bandstand and dance until they laughed themselves into delirium. Dixie also delighted in traveling, reading, playing games, writing both poetry and short stories, and chatting with family and friends. After years of residing in Midland, Texas, Dixie and her husband retired to Lindale, where they quickly joined First Baptist Church and started establishing new friendships. While living in Lindale, Dixie gained four great-grandsons that she took delight in. Above all, Dixie was always thinking about how she could minister to others. Having been saved at a young age, she knew her true mission in life. In her last years, she thought it her mission to witness to her doctors and nurses and would often have her granddaughter write Scripture on the whiteboard in her hospital room in hopes it would spark a conversation with her caregivers about the hope she found in the Lord. The last verse written in her hospital room was Hebrews 12:1-3, "Let us run with endurance the race that is set before us, looking to Jesus, the founder and perfector of our faith, who for the joy that was set before Him endured the cross, despising the shame, and is seated at the right hand of God. Consider Him who endured such hostility against Himself, so that you may not grow weary or fainthearted," - and she did just that! She ran with endurance and unwavering faith. While we grieve for Dixie's precious life on earth, we also find abundant joy knowing that she is finally able to meet her Savior, whom she so eagerly longed to see. Private burial service will be held for family.
Published by Midland Reporter-Telegram on Oct. 30, 2016.