Ronnie “Butch” Bagwell, 70, of Fletcher, NC went home to be with the Lord on Sunday, July 12, 2020, at Mission Hospital. A lifelong resident of Henderson County, he was a son of the late Roy Bagwell Jr. and Catherine Pace Bagwell. He was also preceded in death by his sister Kay Bagwell.

Butch was a lifelong car enthusiast and passed a love of working on cars to his son Rodney. The bond between Rodney and his dad was greater than any between a father and son. They would spend time going together to car shows and loved flea markets. Butch was a devoted husband and father with a strong foundation in his belief in Jesus Christ which everyone around him could feel. He had a contagious smile that made him enjoyable to be around. He never met a stranger and had a welcoming spirit.

Butch loved his wife with a devotion that most would be lucky to experience. He truly adored and loved her. When you saw one you saw the other. They went through this life hand in hand and never forgot to be each other’s best friend and soulmate. They were inseparable to the very end. Butch was truly a man of God and a good man; he will be greatly missed. Heaven has gained an amazing man, rest in peace Butch till we see you again on God’s celestial shore.

A graveside service will be held at Hoopers Creek Baptist Church Cemetery on Thursday, July 16, 2020, at two o’clock p.m. The graveside will be officiated by Rev. Dewey Barnwell and Rev. Phillip Youngblood.1 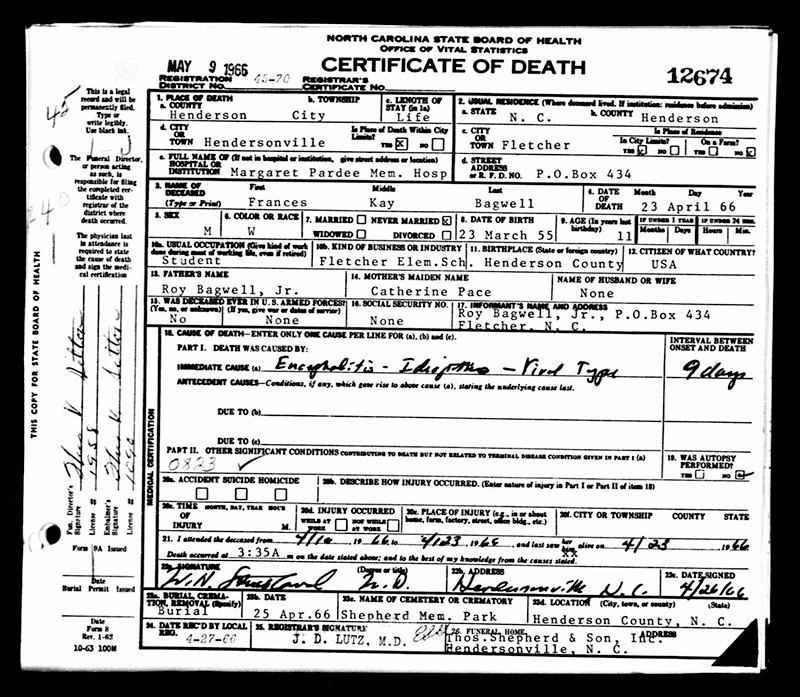 Jacqueline “Jackie” Kay Bagwell Cable, 59, widow of Charles Lee Cable, passed away July 20, 2020.
Born in Greenville County, she was a daughter of Jack Butler and Peggy Scott Jenkins Bagwell of Piedmont. She was employed with Rogers Stereo in Greenville and a member of Shiloh United Methodist Church.
She is survived by sons, Jason Sherman (Heather) of Kenly, NC and Alex Cable of Greenville; daughter, Ashley Cable Kish (Steven) of Greenville; brother, Tim Bagwell of Travelers Rest; grandchildren, Mackenzie and Dawson Sherman, Charlie and Olivia Grace Cable.
She was predeceased by brother, Vern Bagwell and sister, Maria Bagwell.
A graveside service at Shiloh United Methodist Church Cemetery.

Tim Bagwell is the son of Jack Butler Bagwell and Peggy Scott Jenkins.

Stephanie Bagwell is the daughter of Verner Thomas Bagwell and Nina Beth Bowie.