Thomas "Clyde" Bagwell, of Texarkana, Texas, died peacefully at his home on Thursday, March 31, 2016. He was 94 years old. Clyde was born on December 25, 1921, to Will Nelson Bagwell and Nora Chewning Bagwell in Horatio, Arkansas.

While growing up, Clyde lived in Horatio, DeKalb, and Texarkana with his siblings Edith Brower Qualls, Will C. Bagwell, and Jimmie C. Bagwell. After the war, Clyde worked as at the Pine Bluff Arsenal in Pine Bluff, Arkansas and the FAA and VA Hospital in Fayetteville, Arkansas. He later worked at the Federal Correctional Institution in El Reno, Oklahoma and Texarkana, Texas, and the Lone Star Ordinance Plant in Hooks, Texas until retiring from the Federal Government.

Clyde belonged to the American Legion where he received his 50 year membership award in 2015. He was a member of the National Association of Federal Retired Employees. Volunteer work with The Boy Scouts of America and the Westlawn Junior High and Texas High Band Booster Clubs was also important.

Most importantly, Clyde was an active member of Westlawn Missionary Church for over 53 years.

Clyde had a distinguished military career serving with the US Navy in 1937 until 1945. His World War II Service as a boiler operator was on the USS Fairfax, the USS Laramie, the USS Baltimore, the USS Montpelier, and the USS Shenandoah.

Clyde Bagwell was, without apology, deeply proud of his family, his faith and his country. He loved to share stories from his time of service in World War II. He enjoyed time spent with his family. He loved any time spent fishing. Clyde never met a stranger. He was always eager to share a good fish tale or a war story. He treasured his friends, and he never was too busy to spend a moment with you.

His parents and siblings preceded him in death.


Mrs. Bagwell was born March 24, 1932 in Rye, Arkansas. She was retired from JC Penney and was a member of the Westlawn Missionary Baptist Church.


She was preceded in death by her husband Thomas Clyde Bagwell.


Funeral services will be held at 2:00 P.M. Friday, April 15, 2022 at the Chapelwood Funeral Home Chapel with Rev. Steve Reeves officiating. Burial will be in Chapelwood Memorial Gardens Cemetery.

She was buried on 15 April 2022 at Chapelwood Memorial Gardens Cemetery, Texarkana, Texas.

Fred was born in Marietta December 19, 1934 to James Madison Bagwell and Eva Mitchell Bagwell, both of whom preceded Mr. Bagwell in death. He is also preceded in death by his brother William “Bill” Bagwell.

He was a former member of Elizabeth Baptist Church in Marietta, where he taught Sunday school and sang in the choir. He was a veteran of the United States Air Force, having served his country for 14 years. Mr. Bagwell had worked at Lockheed two different times during the 50’s and 60’s and was part of the original C-5 rollout. He was a successful business owner of Fred Bagwell and Son Automotive for over 25 years and was a multi-talented individual who enjoyed being creative with his hands doing leatherwork and woodworking. He loved music and was very talented in many areas. He was an avid outdoorsman and loved to hunt, fish and hike the mountain trails. He was a member of the Riverbend Gun Club in Cumming, the Kennesaw Masonic Lodge # 33 F&AM, and the Lockheed Retirees.

He is survived by his wife, three children, three siblings, 11 Grandchildren, 7 Great Grandchildren, and numerous nieces and nephews. In addition to Bagwell relatives, Fred leaves behind seven sisters-in-law and five brothers-in-law from the Bennett family.1
He was buried at Kennesaw Memorial Park, Marietta, Cobb County, Georgia.1

Children of Hubert Frederick Bagwell and Jo B. (?)

Paralee Bagwell is the daughter of James William Bagwell and Pearl Oshields.

Funeral services will be held at 2:00 p.m. on Friday, April 15, 2016, at Flat Creek Baptist Church for Mrs. Estelle Kendall Bagwell. Mrs. Bagwell was called for her final journey to her heavenly home on Monday, April 11, 2016 following an extended illness. The Rev. Joe Vernon, Pastor Mike Taylor, and Rev. Johnny Foster will officiate. Interment will follow in Memorial Park Cemetery. Visitation will be Thursday, April 14 from 6:00 p.m. until 8:00 p.m. at Little & Davenport Funeral Home.

Mrs. Bagwell, 88, was born in Lumpkin County to the late Mark and Mamie Kendall, and lived most of her life in Hall County. Married 58 years, she was a devoted wife and mother, and shared the role of mother and grandmother to many.

She was preceded in death by her husband, George Truitt Bagwell; daughter, Joan Elaine Bagwell; and her beloved cat, Rocky.

Hers was a life well lived and full of faith, strength, laughter and adventure. With her family and friends, Mrs. Bagwell traveled extensively. She visited all 50 states, Egypt, Israel, Italy, France and many other locations.

She was equally happy at home, organizing family Christmas parties and reunions; working in her gardens; and playing at the lake. With Truitt driving the boat and Estelle keeping a watchful eye, most of her nieces and nephews were taught to waterski and cherish the happy times together.

She is survived by her sisters and brothers in law, Lela Bell Crenshaw, Hazel and Harold Collins, Loy Seabolt; sisters in law, Dolene Kendall and Drusilla Kendall; a host of loving nieces, nephews and families; a special caregivers. 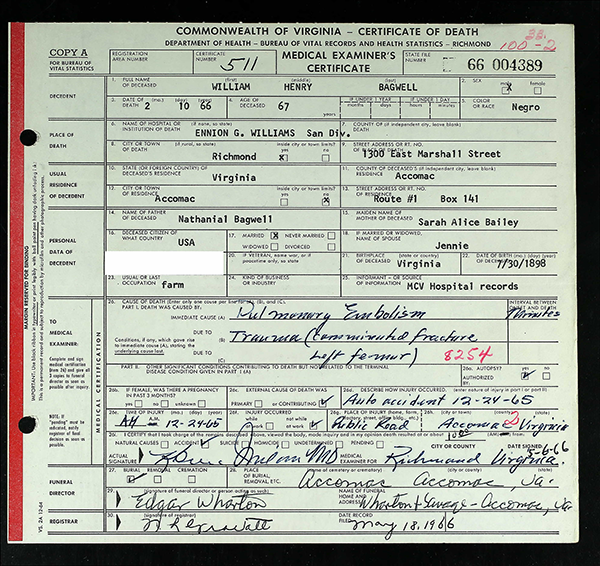 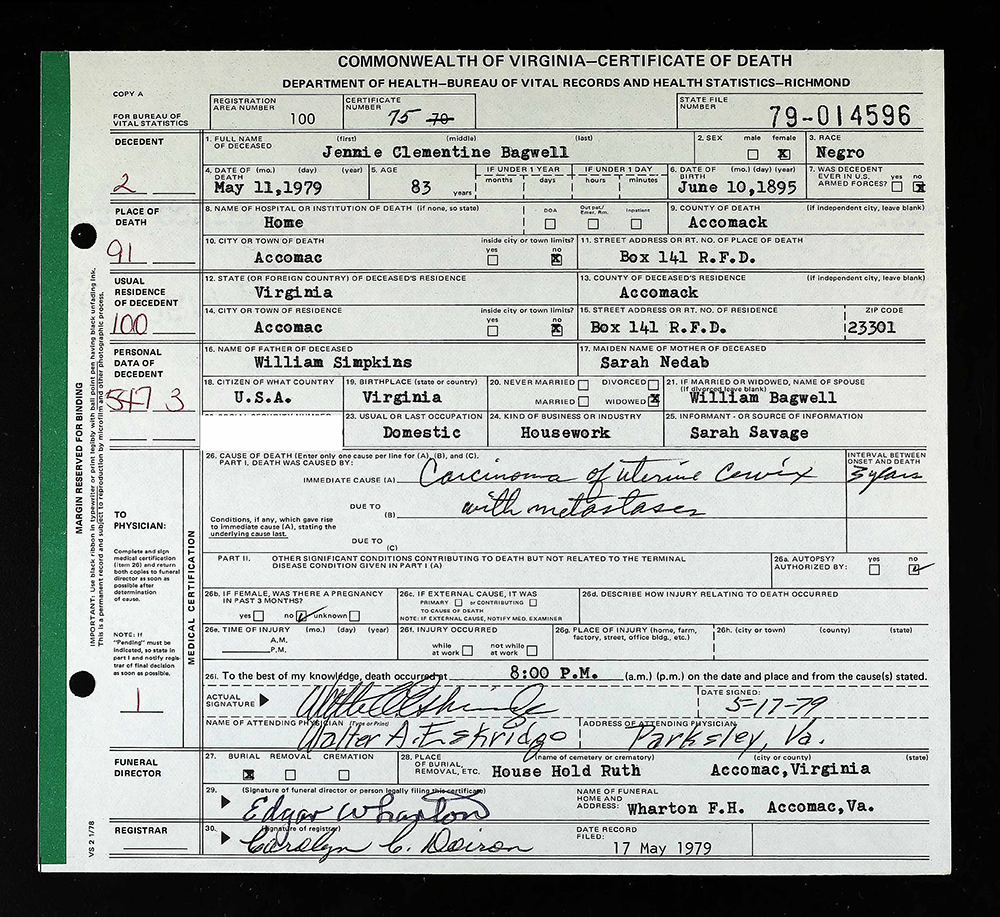 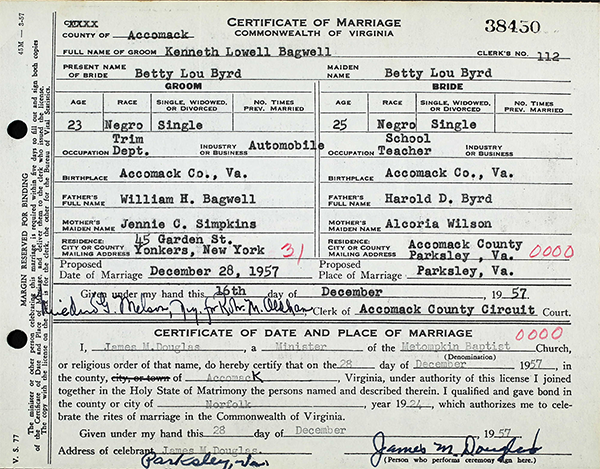 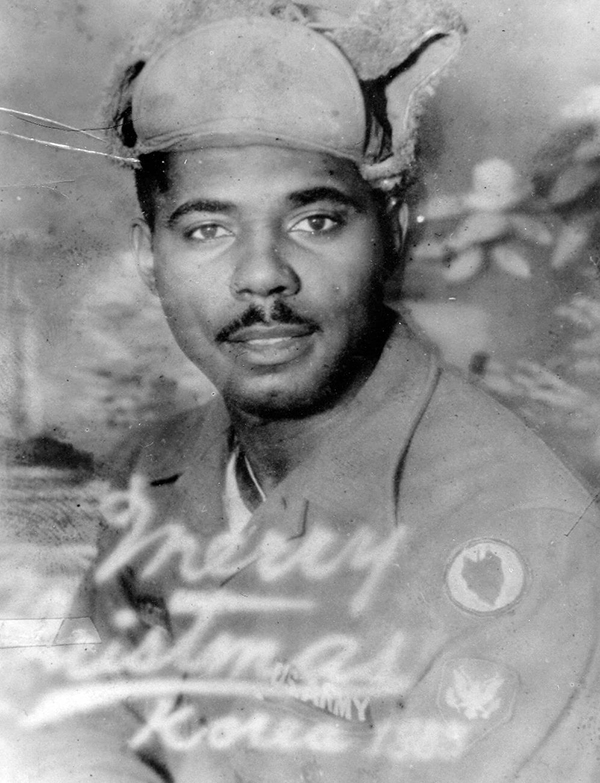 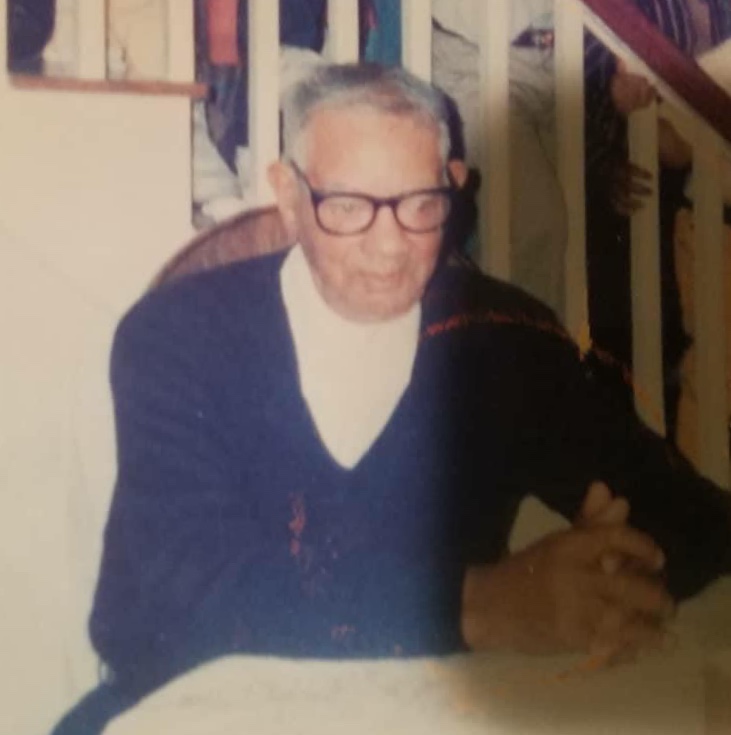 Viola Roberts was also known as Viola Robinson. She was born on 9 June 1906.1 As of 6 February 1921,her married name was Bagwell. She married Charlie Benjamin Bagwell, son of Nathaniel Bagwell and Sarah Alice Bayley, on 6 February 1921 at Accomack County, Virginia.2 Viola Roberts died on 11 February 1980 at age 73.1 She was buried at Household of Ruth Cemetery, Accomac, Accomack County, Virginia.1

F, b. 1899, d. 1996
Marie A. Rodgers was born in 1899. She married Daniel Fowle Bagwell, son of Arvestus Bagwell and Amanda Bailey, on 7 April 1920 at Wellsburg, Brooke County, West Virginia. As of before 1932,her married name was Bagwell. Marie A. Rodgers died in 1996. She was buried at Calvary Cemetery, Pittsburgh, Allegheny County, Pennsylvania.

Children of Marie A. Rodgers and Daniel Fowle Bagwell