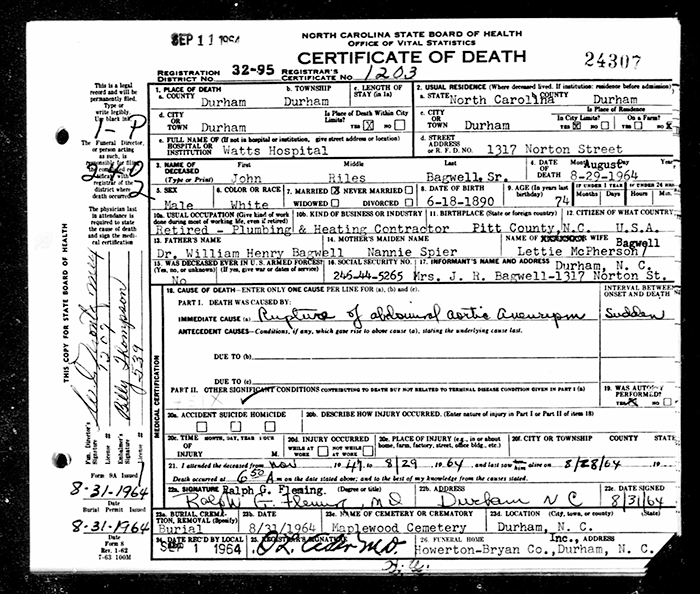 M, b. June 1845
John Bagwell was born in June 1845 in North Carolina. He married Kate H. Brandon, daughter of Haywood Brandon and Betty Vernon, before 1901.

A well know fixtures and cabinet maker, he was a native of Durham, NC; son of John and Kate H Brandon Bagwell; wife of Robina Tillinghast Bagwell.

Member of Covenant Presbyterian Church, a World War Marine Corp. veteran and has been a resident of Spartanburg for the last 22 years.

A graduate of Converse College, she was a proofreader with the Spartanburg Journal, the former afternoon paper, for 28 years and also was an arts critic for the paper.

Woody was born in Charlotte, NC in 1928. He graduated from Spartanburg High School in 1946 and continued on to earn a BS degree in Mechanical Engineering from Clemson University. He received his MDiv from San Francisco Theological Seminary and was ordained as a Presbyterian minister in January 1960.

Woody married Cecile in 1957. Together they served as Presbyterian missionaries in Pakistan during the 1960s. Upon returning to the States, Woody received a M.Ed. from CSU Fresno and began a teaching career with Bakersfield City School District. He retired in 1990.

Cecile died in February of this year. Woody is survived by his children: Bruce of Bakersfield and his children Tayler, Shaefer, Bryce and Noah; Bobi (David) of Roanoke, VA and their sons Luke, Timothy and Ian; Steve (Rosalind) of Waxhaw, NC and their daughter Laura; his sisters Catherine of Colfax, NC and Robina of Clarkston, MI.

Woody will be warmly remembered for his frequent puns and great sense of humor, his love for and loyalty to his family, his friendly smile, and especially his deep and devoted love for the Lord Jesus. In the last period of his life he looked forward to dancing with his beloved Cecile again, this time in the presence of Jesus, and to experience all that heaven has to offer.

Woody and Cecile loved to open their home and provide hospitality and fellowship to missionaries on home assignment or who were passing through Bakersfield.

The family wishes to thank Woody and Cecile's extended family, friends, fellow church members and colleagues who have so lovingly supported them through the years.

A memorial service will be held on Saturday, August 31st at 2:00 at Trinity Anglican Church, 11300 Campus Park Dr, Bakersfield, Fr. Karl Dietze officiating. The reception will be held at 3:30 in Westminster Hall at First Presbyterian Church, 1705 17th St.

In lieu of flowers, memorial donations may be made to Trinity Anglican Church, First Presbyterian Church, Global Teams or Hoffman Hospice.

Cecile was born in China on March 27, 1935 to Presbyterian missionary parents, Dr. Ralph Lewis and Roberta (Taylor) Lewis. She attended Whitworth University in Spokane, WA before transferring to Stanford University School of Nursing, graduating with her BSN in 1957.

Cecile married Haywood (Woody) Bagwell in 1957. Together they served as Presbyterian missionaries in Pakistan during the 1960s. Upon returning to the States, Cecile continued working as an RN until becoming a Marriage and Family Therapist. She worked at Kern Medical Center and then developed her private practice.

Cecile is survived by Woody, her husband of 61 years; her children: Bruce of Bakersfield and his children Tayler, Shaefer, Bryce and Noah; Bobi (David) of Roanoke, VA and sons Luke, Timothy and Ian; Steve (Rosalind) of Waxhaw, NC and daughter Laura; her siblings Harry (Norma) of Sacramento, CA, Charles (Nelda) of Mt. Hermon, CA, and Wendy (Darrell) of Bakersfield; as well as many nieces, nephews and loving friends.

Cecile will be fondly remembered for her bright and warm smile, her open and affectionate heart, her willingness to listen with compassion, cheerful silliness and her deep and profound love for the Lord Jesus. She looked forward in her last days to seeing Jesus face to face and to his embrace.

Cecile loved her time as a volunteer with Global Teams and participating in Altar Guild and the Order of St. Luke at Trinity Anglican Church. She and Woody loved to provide hospitality and fellowship to missionaries on home assignment or who were passing through Bakersfield.

The family thanks Cecile's friends, fellow church members and colleagues who have so lovingly supported her through the years.

Charlie B. Bagwell - Obituary
The Daily Times - August 6, 1986 - Page 02
Charlie V. Bagwell was also known as Charlie Benjamin Bagwell. He was born on 12 August 1915 in Accomack County, Virginia. He was the son of George Plez Bagwell and Racilla Robinson. Charlie V. Bagwell married Lottie (?) after 1934. Charlie V. Bagwell died on 31 July 1986 in Pocomoke City, Worcester County, Maryland, at age 70. He was buried on 7 August 1986 at Tindley Memorial Park Cemetery, Maryland. 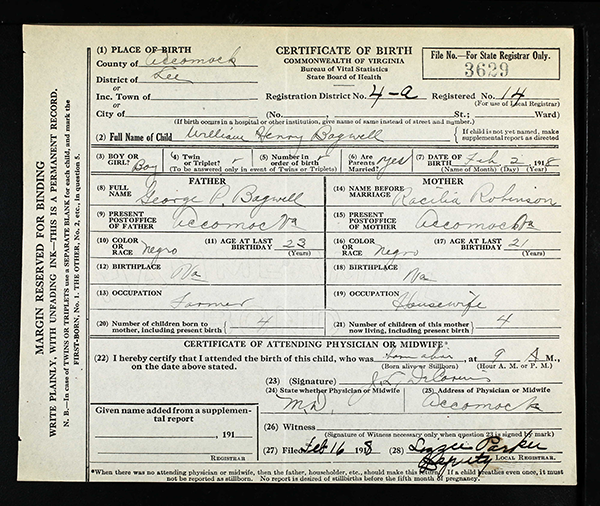 Bill enlisted in the USAF in October 1963; while serving in Okinawa, Japan, he met and married his wife of 44 years, Toshi Iju. After 26 years of service, he retired on Dec. 31, 1989. Bill received his Associates Degree from NMSU-A, Bachelors Degree from Park University, and a Masters Degree from Embry-Riddle Aeronautical University. After completing his education he was the Center Director for Embry-Riddle at Holloman AFB until he retired in April 2010. After his retirement, he enjoyed spending time with his wife at the Senior Center and shooting pool in the city pool league and at the VFW.

Bill was preceded in death by his parents.

He is survived by his wife, Toshi Bagwell; his son, Billy Bagwell of Alamogordo; and sister Dorna Larson of Everett WA.