Mrs. Bagwell was born in Chester, SC and was a daughter of the late Clarence Dixon Freeman and Pauline Flynn Freeman. She was a graduate of Chester High School and attended York Tech. Carol worked for Chester Sportswear until their closing and also for Chesterfield Manufacturing in Chesterfield, SC. She was an avid reader and she loved to travel.

She is survived by two children, Kim Elkins and Bobby R. Bagwell,Jr. (Daphne) both of Chester, SC; four grandchildren; five great-grandchildren; one brother, Clarence Freeman of Chester, SC; one sister, Betty Callahan of Prestonsburg, KY. In addition to her parents she was preceded in death by her husband, Bobby Bagwell; son Perry Bagwell and her grandson, Christopher Elkins.

Joan Bagwell is the daughter of Charles Emmet Bagwell and Mildred Webster.

Scott Bagwell is the son of Maxwell Rickey Bagwell and Sherryl Sue Speigner.

Michelle Bagwell is the daughter of Maxwell Rickey Bagwell and Janet Kay Taylor. 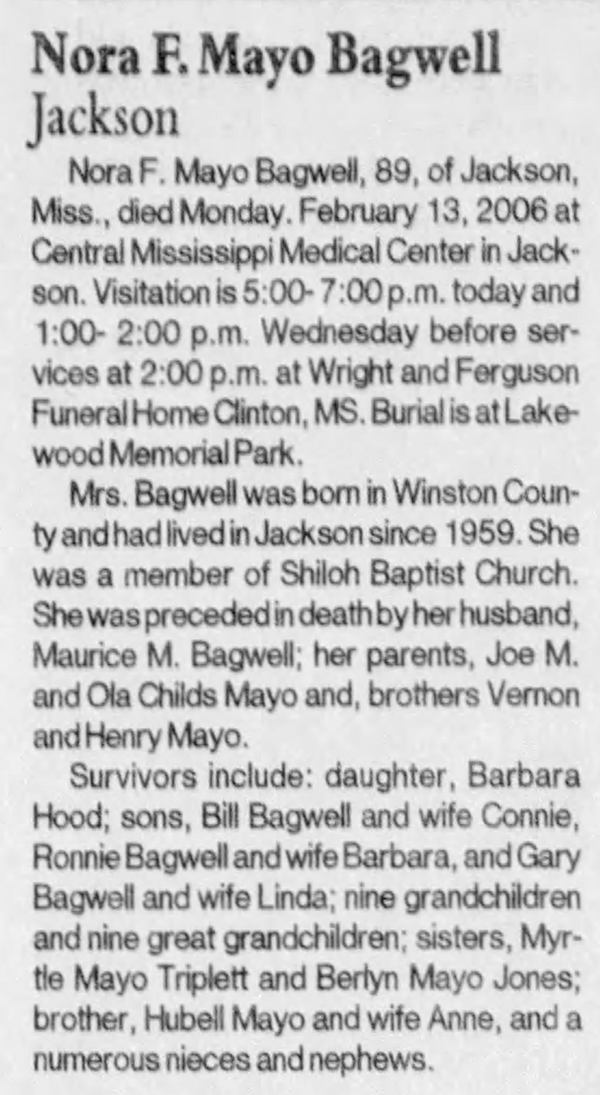 
Barbara Ann Bagwell Hood age 78 was a beloved mother and grandmother. She gained her "Angel Wings" and went to be with our heavenly Father on August 21, 2021.

A native of Noxapater, MS and later laid her roots in Vicksburg, MS.

She is preceded in death by her beloved parents, Meaurice Marzine Bagwell and Nora Faye Mayo Bagwell. Also one great-granddaughter Kynsleigh Claire Barnes, child of Andrew (AJ) and Jamie Barnes.

Mamaw's last and final wish was to be able to see her last grandson, Hunter List, graduate. God wanted her home more. So her grandson will do the honors of walking her urn into the service.