The USS Naos (AK-105) was a Crater-class cargo ship commissioned by the US Navy for service in World War II. Naos was named after the star Naos, in the constellation Puppis. She was responsible for delivering troops, goods and equipment to locations in the Asiatic-Pacific Theater.


In 1943-1944:
Departing San Pedro on 25 August, Naos loaded cargo at San Francisco and made a round trip run to Pearl Harbor and back between 28 August and 25 October. During the next month she was converted for use as a combination troop transport and cargo ship by General Engineering and Drydock Co., San Francisco. She cleared the Golden Gate 10 December, embarked 1,080 troops at Port Hueneme, and sailed for the South Pacific in convoy 12 December.

Naos reached Espiritu Santo, New Hebrides, 3 January 1944, and discharged her troops and supplies. A week later she sailed for Fiji and thus began shuttle duty throughout much of the South Pacific. Troop and cargo runs during the next eight months sent her to numerous American bases scattered from Samoa and the Ellice Islands to New Caledonia and the Solomons. While carrying more than 1,000 troops from Tulagi to New Zealand in mid-March, she was pounded by a severe tropical storm which left her relatively undamaged but damaged her escort, PC–588. Naos provided emergency aid before sending the battered escort to New Caledonia.

Maintaining her busy pace of operations, Naos departed Guadalcanal for the Admiralties. She operated out of Manus between 30 September and 25 October, thence sailed the next day to carry troop reinforcements and supplies to the Palaus. She reached Kossol Passage 31 October, and for more than a month she operated in coastal waters off the northern Palaus. During yet another tropical storm 8 November, Naos sent a volunteer crew to rescue 26 men from SC–633 which was thrown upon a reef by heavy seas. Early in December she embarked 1,114 troops and loaded US Army tanks at Anguar and Peleliu before departing in convoy 8 December. Steaming via the Russell Islands, she returned to Nouméa 22 December. Four days later she resumed shuttle runs which continued throughout the South Pacific for the next five months.

1945-1946:
After embarking Seabee units at Nouméa, Naos sailed for Okinawa 15 May 1945. She touched at bases in the Solomons, the Marshalls, and the Western Carolines and finally arrived off Hagushi Beach, Okinawa, 11 July. She completed discharge and reload operations later that month, and on 29 July, she joined a 65-ship convoy bound for the Marianas. Sailing via Saipan, she reached Pearl Harbor 22 August.[3]

Following the Japanese surrender, Naos returned to the western Pacific carrying repatriated prisoners-of-war and military cargo. She arrived Okinawa 2 October; and, after steaming to avoid Typhoon Louise a week later, she embarked 1,040 troops for return to the United States. She sailed 14 October, and arrived San Francisco 5 November. Naos decommissioned there 6 December 1945, and was returned to the War Shipping Administration (WSA) the same day. Her name was struck from the Navy List 3 January 1946. He married Sally Sue Schwarzmiller on 17 October 1969 at Snohomish, Snohomish County, Washington. Byron Edward Bagwell died on 28 February 1993 at age 80.1 He was buried at Carnation Cemetery, Carnation, King County, Washington.1

She was born on April 9, 1921, to the late David Sanchez and Nicanora Martinez. Also preceding her in death is her husband, Bedford Bagwell and their son, Anthony Bagwell; brothers, Fidel Gurule and Amadeo Sanchez and niece, Patricia Gurule.

A rosary was recited Sunday Aug. 23, at the chapel at Nelson Funeral Home. A funeral mass will be celebrated by the Rev. John McHugh at 10 a.m. Monday Aug. 24 , at St. Gertrude Catholic Church in Mora. Interment will follow the mass at La Cueva Cemetery in La Cueva, N.M. Serving as pallbearers will be Ronnie Gurule, Dominic Pacheco, Richard Garcia, Ernest Gutierrez, Roy Mares and Raymond Pacheco.

F, b. 22 April 1915, d. 28 October 1971
Willard Roy Carnal was born on 22 April 1915 in Pottawatomie County, Oklahoma. As of after 1933,her married name was Bagwell. She married Dora Elzen Bagwell, son of Elbert Franklin Bagwell and Ruth Almira Townsend, after 1933. Willard Roy Carnal died on 28 October 1971 at age 56.1 She was buried at Green Acres Memorial Park, Scottsdale, Maricopa County, Arizona.1

M, b. 26 February 1948, d. 1 July 2007
Thomas Gerald Bagwell Jr. was born on 26 February 1948 in Hobbs Lea, New Mexico. He was the son of Tom Walton Bagwell and Patricia A. Roberts. He served in as a Sergeant in the United States Marines in Vietnam. Thomas Gerald Bagwell Jr. died on 1 July 2007 in Casper, Natrona, Wyoming, at age 59. He was buried at Oregon Trail State Veterans Cemetery, Evansville, Natrona County, Wyoming. 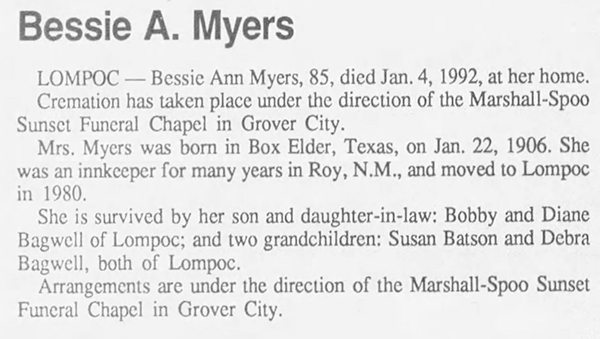 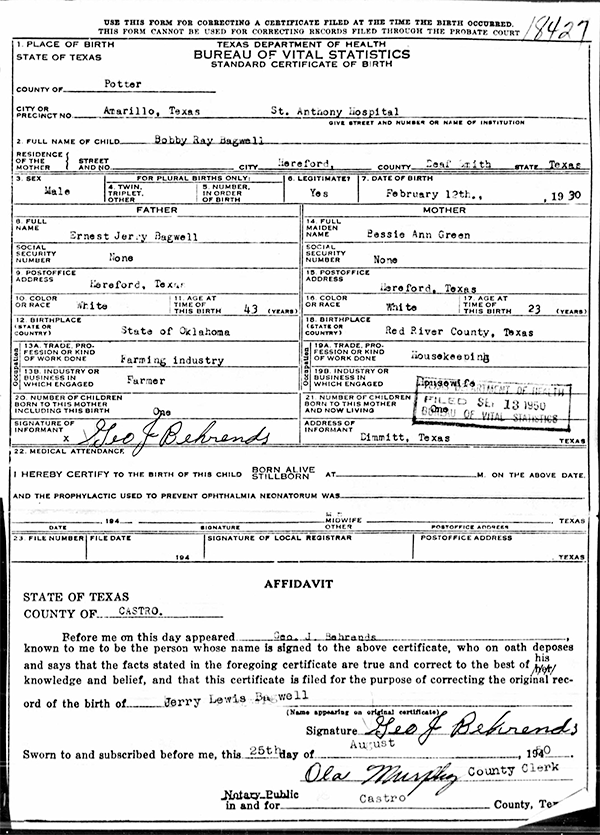