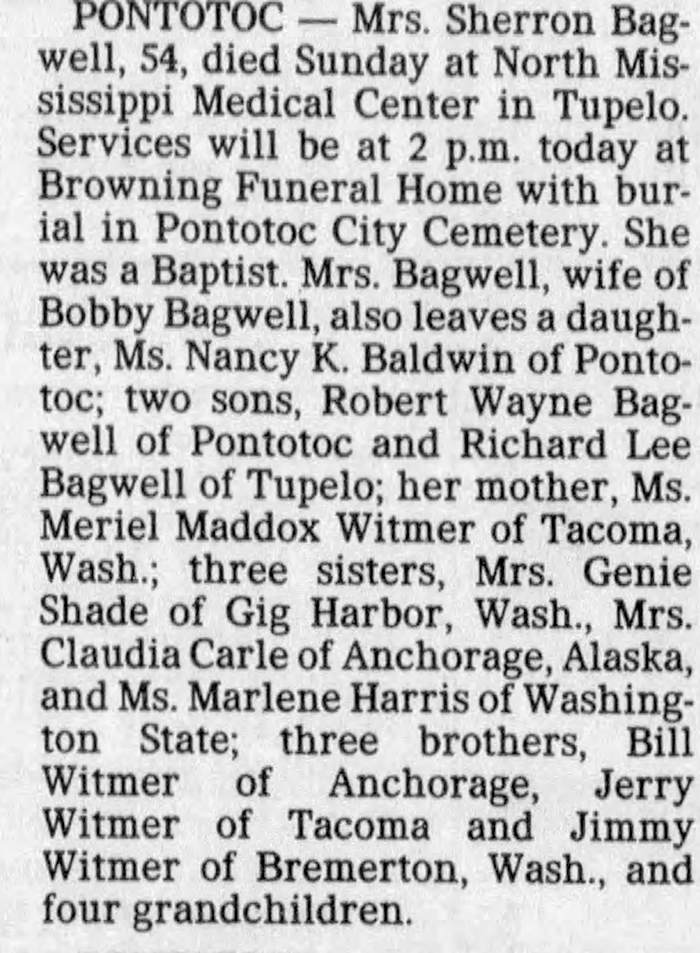 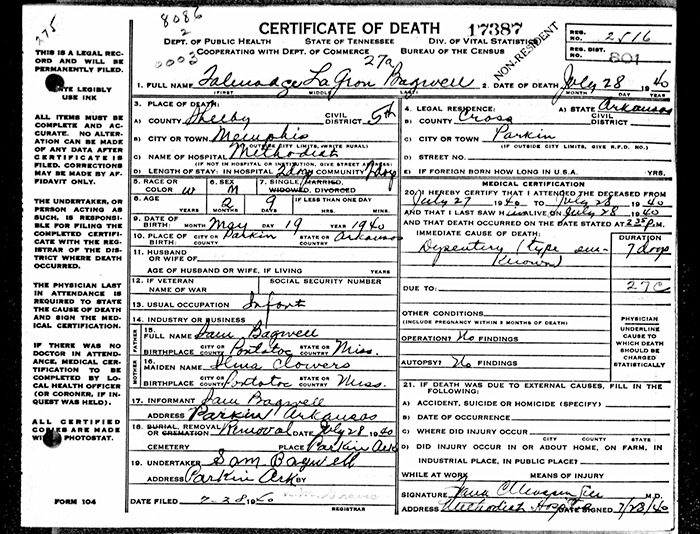 Robbie Faye Bagwell Wolfe, 87, Passed away April 1, 2021 at home peacefully into the arms of her Savior Jesus Christ. She was surrounded by her family members who have faithfully cared for her needs during many extended illnesses.

Burial will be in Henry Cemetery in Corinth with the Rev. Dennis Smith officiating.

She was born at her home place in Myrtle, MS on January 6, 1934 to Donald Robert Bagwell and Mary Frances Caldtharp Bagwell. She grew up in Union County and graduated from Myrtle High School in 1953. Upon graduation from high school she was employed by Erwin Shirt Factory in New Albany, MS as a seamstress. She married the love of her life Robert Wolfe on December 31, 1953. Together they were blessed with five children, two sons and three daughters. She was a faithful wife and mother to her children and husband of 68 years. In later life she was employed with ITT/ Cortelco and retired after 17 years of service. Robbie loved the Lord and was a faithful member of First Baptist Church, Corinth. She worked in the nursery and in the children's dept. for several years. She dearly loved her Sunday School class and teacher. She loved to listen to gospel music while cooking family meals and serving for her family's needs. She was proud of her children and grandchildren and all that they had become in her life. She loved to cook for her family, especially on all of the holidays and birthdays. She prepared and served Sunday dinner for all of her family members every Sunday as long as she was able. Skillet fried chicken was a regular staple meal and a delicacy for all of the grandchildren as well as the adults.

She was preceded in death by both of her parents and grandparents. A brother-Burnice Bagwell, two sisters-Loretta Overall and Mildred Tubbs.

Fond memories and expressions of sympathy may be shared at www.memorialcorinth.com for the Wolfe family.2

She was buried at Henry Cemetery, Corinth, Alcorn County, Mississippi.2

Southern Funeral Home Chapel was in charge of arrangements.

Mr. Bynum was born in Okolona, Ark., and was retired from the United States Air Force.

He was preceded in death by his wife, Opal Bynum; a stepson, Dennis Cothran, two brothers, Jesse Bynum and Pete Bynum; and one sister, Syble Prater.

He is survived by two step grandsons, Brian Cothran of Cincinnati and David Cothran of Texas; one step great granddaughter, Elizabeth Cothran and a number of nieces and nephews.1 He was buried at Rose Hill Cemetery, Houlka, Chickasaw County, Mississippi.1

The son of the late John vincent Holladay and the late Eula Carolline Boyd, he was a reitred electrician, a veteran and was a member of Herking Hill Methodist Church in Ripley, TN. He was preceded in death by his wife, the late Lovis Bagwell Holladay who passed away Mar 24 1992.

Houlka Funeral Home was in charge of arrangements.1 He was buried.1