Born in Greenville, he is the son of Elizabeth Buchanan Bagwell and the late James Manual Bagwell.

In addition to his loving wife, he is survived by a daughter, Melissa (Missy) Packard (Jeff); a son, Danny Scott Bagwell; four grandchildren, Ross (Allie), Rachel Packard, Griffin, and Tyson Bagwell; a brother, Robert Bagwell (Sue). He was preceded in death by a brother, Gerald Eugene Bagwell. 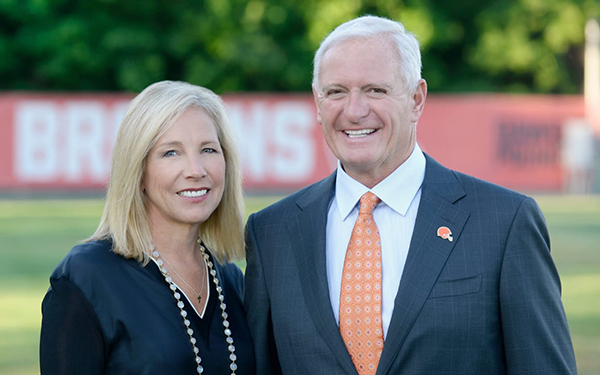 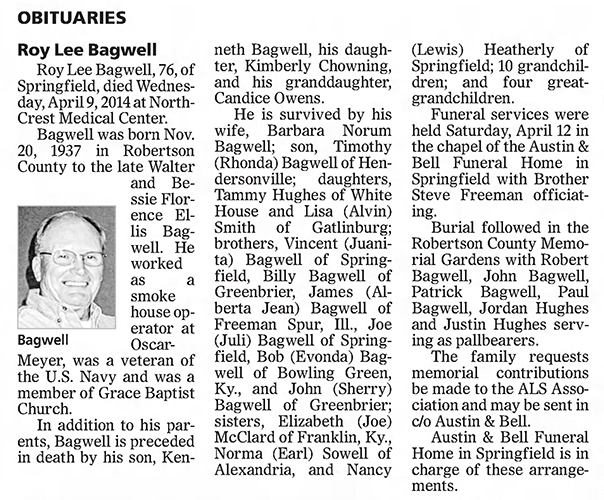 Mr. Bagwell was born November 20, 1937 in Robertson County to the late Walter and Bessie Florence Ellis Bagwell. He worked as a smoke house operator at Oscar-Meyer, was a veteran of the U.S. Navy and was a member of Grace Baptist Church. 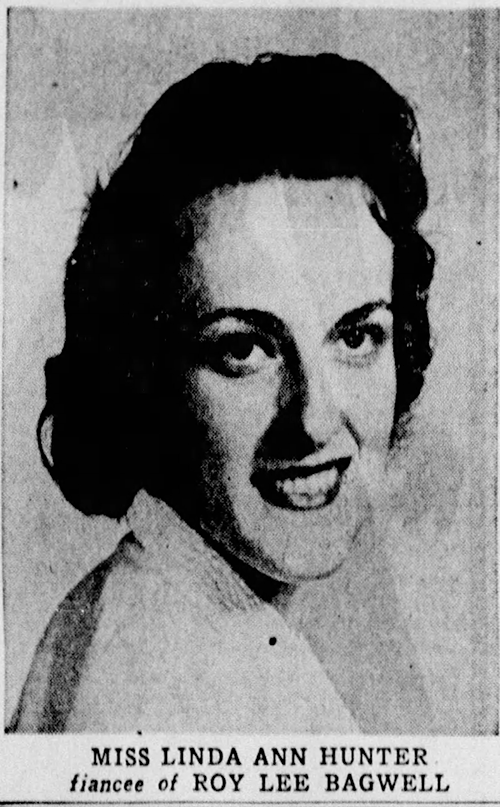 
Linda Ann Bagwell was born March 31, 1942 in Robertson County, Tennessee. She passed away Monday, March 14, 2011 at Northcrest Medical Center in Springfield, Tennessee at 68 years of age. Linda was the daughter of James Robert Hunter and Annie Corbitt Hunter, who preceded her in death. Linda was also preceded in death by son, Kenneth Lee Bagwell and brother James H. Hunt. She is survived by one son, Timothy Bryan Bagwell of Hendersonville; three daughters, Kimberly Ann Chowning of Springfield, Tammy Lynn Hughes of White House and Lisa Michelle (Alvin) Smith of Springfield; eleven grandchildren and two great grandchildren. Linda was a homemaker. She will be missed by all who knew and loved her.
A Memorial Service will be held 7:00 p.m. Wednesday, March 16th at Austin & Bell Funeral Home, Springfield, Tennessee. Final disposition will be cremation.

Kenneth Lee Bagwell, age 38, of Greenbrier, passed away Saturday, November 22, 2008. Memorial services will be held Wednesday, November 26, 2008 at 2pm in the chapel of Austin & Bell Funeral Home in Greenbrier with Reverend Roger Elliott officiating. Visitation was held T at the funeral home on Tuesday, November 25, 2008 from 6-8pm and again on Wednesday from 12noon until the hour of service. Mr. Bagwell was born December 26, 1969 in Detroit, Michigan to Roy Lee (Barbara) Bagwell and Linda Ann Hunter Bagwell. He worked as a carpenter and was a member of Long Hollow Baptist Church. Mr. Bagwell was an avid fisherman and he loved to coach baseball. In addition to his parents he is survived by his wife, Annette Bagwell; sons, Ryan Taylor Bagwell, William Cole Bagwell and Bryan Kenneth Bagwell, all of Greenbrier; daughter, Andrea Leigh Bagwell of Hendersonville; brother, Timothy Brian Bagwell of Hendersonville; sisters, Kimberly Ann Chowning of Springfield, Tammy Lynn Hughes of White House, and Lisa Michelle (Alvin) Smith of Springfield.
Austin & Bell Funeral Home is in charge of these arrangements. www.austinandbell.com
AUSTIN & BELL FUNERAL HOME-GREENBRIER, TN (615) 643-4000.

Sergeant Bagwell was a member of Company A, 1st Battalion, 23rd Infantry Regiment, 2nd Infantry Division (US Army). He was listed as Missing in Action while fighting the enemy in North Korea on September 19, 1951. He was presumed dead on March 2, 1954.

Matthew Bagwell is the son of Joey Bagwell.

Jake Bagwell is the son of Joey Bagwell.