USS Conway (DD/DDE-507), a Fletcher-class destroyer, was the second ship of the United States Navy to be named for William Conway, who distinguished himself during the Civil War.

1943
Conway cleared Norfolk 5 December 1942 for Nouméa, and Efate and arrived 13 January. She put to sea 27 January as her force sailed to meet Japanese ships evacuating troops from Guadalcanal. On 29 and 30 January, her force came under heavy enemy air attack in the Battle of Rennell Island. Conway splashed several enemy planes, and rescued survivors of Chicago. Throughout February, she patrolled between Espiritu Santo and Guadalcanal, and between 4 and 6 March, participated in the bombardment of Vila Stanmore and a shipping sweep of Kula Gulf.


Conway in August 1943.
From 10 March 1943 Conway had patrol duty and conducted training from Efate. She sailed from Efate 15 June in support of the Rendova landings, escorting supply ships, then had the same duty for the New Georgia operations, and conducted bombardments of Kolombangara and Munda. Between 26 July and 12 August, she operated out of Purvis Bay, escorting fueling units and making night raids on Japanese shipping "up the Slot". She sailed from Purvis Bay 13 August to take part in the Vella Lavella operation, escorted LSTs and supply ships in to the beach, and then took up patrol north and west of the island. She returned to Guadalcanal 30 August escorting transports carrying the First Marine Raiders, and until 12 September conducted night raids on enemy barges off Guadalcanal.

After overhaul in the Fiji Islands and at Sydney, Australia, Conway returned to Southwest Pacific operations in October 1943. On 27 October she participated in the initial landings in the Treasury Islands, and then in landings on Choiseul. She supported the landings at Bougainville on 29 October, and until 10 February 1944, she continued operations in support of troops ashore on Bougainville, escorting reinforcement convoys and firing on shore targets. Between 11 and 17 February, she participated in the landings on Green Island, then returned to her Bougainville operations.

1944
Between 28 February 1944 and 17 March, Conway bombarded targets in New Britain and New Ireland by day, and conducted searches for enemy shipping by night in the waters off these islands, and until 4 May, continued operations in the Solomons on escort duty, patrol, and in exercises with cruisers.

On 8 May, at Majuro, Conway joined the 5th Fleet. She sailed from Majuro 14 May for Pearl Harbor and Kwajalein, where she loaded troops for the Saipan operation, landed them 15 June under heavy gunfire, and served as close fire support and screening vessel off the island. After replenishing at Eniwetok, Conway joined in the preassault bombardment of Guam and Tinian, remaining to cover the landings at Tinian. She continued to operate in the Mariana Islands campaign until 12 August, when she cleared for San Francisco and overhaul.

Conway returned to Ulithi 21 November 1944 to join the 7th Fleet. She put to sea at once to patrol in Leyte Gulf, join in an antishipping sweep in Camotes Sea, and fire in the bombardment of Plompon and Ormoc Bay. After replenishing at Kossol Roads, Conway covered the Mindoro landings, then patrolled west of Mindoro in the Sulu Sea until 23 December, when she put into Manus.

1945
Conway sailed again 31 December for the initial landings on Lingayen, Corregidor, and Parang, and continued operating in Philippine waters until June 1945. On 7 June, Conway sailed from Subic Bay in the distant covering group for the Brunei Bay operation. She covered minesweeping and fired in preassault bombardment at Balikpapan, guarded an underwater demolition team as it prepared the beach, and conducted bombardment during the actual landings. She rested briefly at Leyte. and then took part in the landings at Saragani Bay, Mindanao.

With the close of the war, Conway began patrolling east of Leyte Gulf, and supported minesweeping operations in the Yellow Sea, visiting Okinawa and Tsingtao. She put into Jinsen, Korea, from 20 to 24 September 1945, and then sailed in the South and East China Seas as flagship of the forces lifting Chinese troops from Indo-China to Formosa and Manchuria until 29 December, when she sailed from Shanghai for San Diego, New York City, and Charleston, arriving 13 March. Conway was placed out of commission in reserve 25 June 1946, berthed at Charleston. 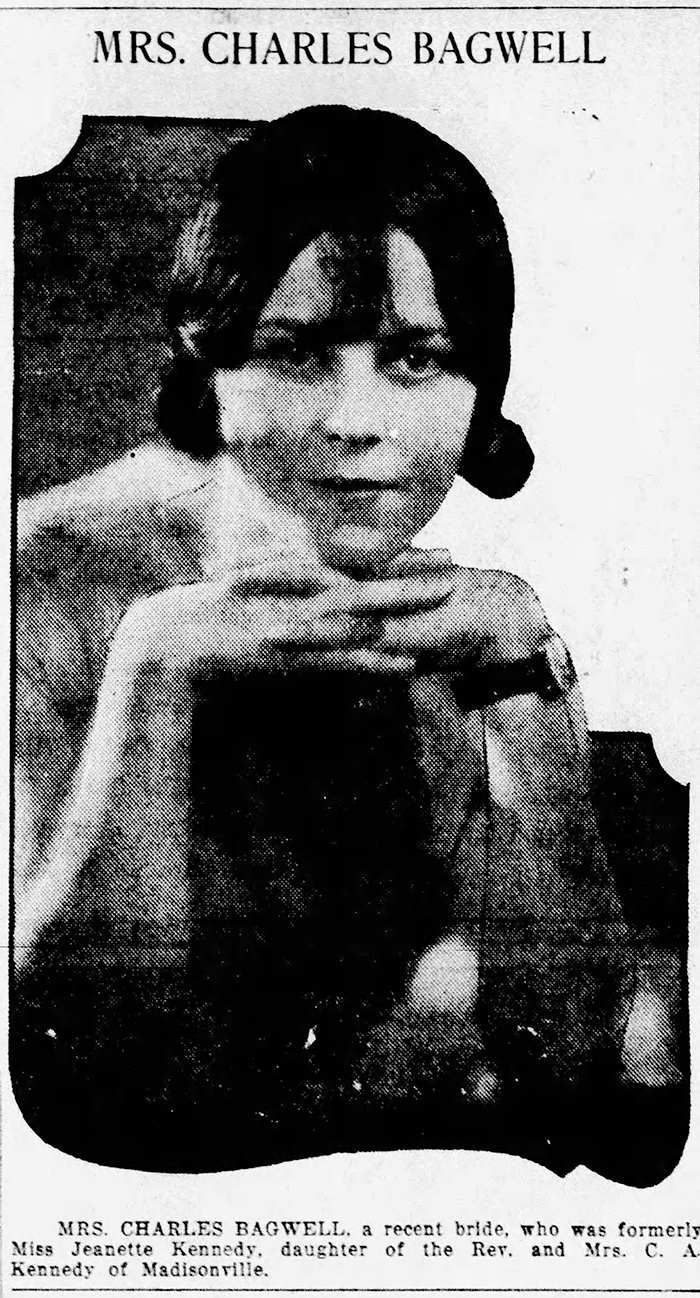 F, b. circa 1863
Margaret Bagwell was born circa 1863. She was the daughter of Albert James Bagwell and Mary Ellen Porter.

F, b. circa 1878
Almer Texas Bagwell was born circa 1878. She was the daughter of Albert James Bagwell and Mary Ellen Porter.

M, b. circa 1877
William P. Bagwell was born circa 1877 in Georgia. He was the son of Albert James Bagwell and Mary Ellen Porter. William P. enlised in the U.S. Army. In 1900, he was stationed in Bongas, Phillipine Islands.

M, b. July 1878
John C. Bagwell was born in July 1878 in Georgia. He was the son of Albert James Bagwell and Mary Ellen Porter.

M, b. 1869
James Bagwell was born in 1869 in Georgia. He was the son of Albert James Bagwell and Mary Ellen Porter.

F, b. 1866
Cynthia Coretha Bagwell was born in 1866 in Georgia. She was the daughter of Albert James Bagwell and Mary Ellen Porter.

He was the son of the late James P Bagwell and the late Frances Staten. He was born in Pontotoc County and moved to Parkin, Arkansas in 1916 where he was a farmer and a Supervisor of roads. He returned in 1944 to Houlka. He was a Baptist and a member of Liberty Baptist Church.

The daughter of the late Jack Westmoreland and the late Seleta Roe, she was born in Randolph. She was a widow of the late Walter Bagwell. She was a homemaker and a member of Liberty Baptist Church.

Browning Funeral Home was in charge of arrangements.2
She was buried at Rose Hill Cemetery, Houlka, Chickasaw County, Mississippi.2

Mary S. Lee was born circa 1859 in Georgia.1 She was the daughter of James Wright Lee and Caroline S. Bagwell.1

Asbery L. Lee was born circa 1861 in Georgia.1 He was the son of James Wright Lee and Caroline S. Bagwell.1

Sarah C. Lee was born circa 1865 in Georgia.1 She was the daughter of James Wright Lee and Caroline S. Bagwell.1

Candes A. Lee was born circa 1867 in Georgia.1,2 She was the daughter of James Wright Lee and Caroline S. Bagwell.1,2