F, b. 15 August 1918, d. 15 December 1993
Lennual Settia Bagwell was born on 15 August 1918 in Missouri. She was the daughter of Elmer Desco Bagwell and Myrtle Mae Griffin. Lennual Settia Bagwell died on 15 December 1993 in Springfield, Greene County, Missouri, at age 75. She was buried at Greenlawn Cemetery, Springfield, Greene County, Missouri.

M, b. 15 August 1920, d. 13 October 1999
Warren Harding Bagwell was also known as Warren "Ward" Bagwell. He was born on 15 August 1920 in Missouri. He was the son of Elmer Desco Bagwell and Myrtle Mae Griffin. Warren Harding Bagwell died on 13 October 1999 at age 79. He was buried at Rivermonte Memorial Gardens, Springfield, Greene County, Missouri.

She was a member of the First Freewill Baptist Church where she actively served as a Sunday school teacher, choir member, and Ladies Auxiliary member. Evelyn Retired from the Springfield Public School system after 22 years. She will be remembered as a great cook and an avid gardener who grew beautiful flowers. She loved fishing, painting, and good gospel singing; but her greatest loves were her church, family, and her dog, Angel.

Funeral services will be held at 11:00 a.m., Monday, May 23, 2011, in First Freewill Baptist Church with Pastors Alvin Hook and Don Carter officiating. Burial will follow in Greenlawn Memorial Gardens, Springfield, MO. Visitation will be held from 4:30-6:30 p.m. on Sunday, May 22, 2011 in Greenlawn Funeral Home North. Memorial contributions may be made to the Alzheimers Association or First Freewill Baptist Building Fund.

Special thanks to caregivers and the entire staff at Springfield Rehabilitation Center and Hospice Compassus for their compassion and support.


She was buried at Greenlawn Cemetery, Springfield, Greene County, Missouri.

M, b. 10 November 1914, d. 8 October 1958
Dewey Winfield Mills was born on 10 November 1914 in Lawrence County, Indiana.1 He married Ruth A. Bagwell, daughter of Melvin Llary Bagwell and Esther M. Sowder, in 1935.1 Dewey Winfield Mills died on 8 October 1958 in Bedford, Lawrence County, Indiana, at age 43 Dewey was dead on arrival at Dunn Memorial Hospital, his death was sudden. He was a Fabricast employee and a farmer. The son of Cyrus and Carried Belle Speer Mills. He married Ruth Bagwell in 1935.

A son, Robert Howard, and an infant daughter, Delores preceded him in death.

Services will be on Saturday at the Pinhook Christian Church with Brother Robert Williams officiating. Day and Carter Mortuary are in charge of the funeral.1 He was buried at Pinhook Cemetery, Bedford, Lawrence County, Indiana.1

Child of Travis Maloy Bagwell and Ethel May Simpson

Emamuel Bagwell was born in 1898 in Alabama. He was the son of Emanuel York Bagwell and Loveaser Louisa Collins.


William Charles Bagwell Jr., 91, of Georgetown, Texas passed away on July 19, 2013. He was deeply loved by family and friends.

Bill was soft spoken and gentle while being a superb football player. He started his career at Breckenridge High School. Upon graduation, he received the honor of being named "All State". He went on to play for Rice University on a full scholarship. The U.S. had entered WWII, so he enlisted in the Army Air Corps where he continued to play football for the Randolph Flyers. He graduated from Rice after the war, but was soon recalled. It was during this time that he met the love of his life, Patricia Cody. They married and soon began seeing the world. He was stationed on Kwajalein for the A Bomb tests, Patrick AFB, Florida, for the beginning of the space program, Hahn AFB Germany for the Berlin Wall Crisis among other assignments. He retired after 25 years as a Major. He served in World War II, Korea and Vietnam.

He is survived by his wife, Patricia of Georgetown, Texas; his sons: Bill Bagwell (Suzanne) of Georgetown, Texas and Thad Bagwell (Birdie) of San Marcos, Texas; his daughters: Barbara Cipolla (David) of San Ramon, California and Patricia Knox (Daniel) of Tigard, Oregon. There are six grandchildren: Bob, Brian, Laurel, Cody, Sophie and Zach. Lastly, are the wonderful great grandchildren: Ashley, Ian, Cody, Bailey, Joshua and D.J. who love their "Peepaw".

Bill's kindness, sense of humor, humility and warmth will always be in our hearts; his sweet smile on our faces. 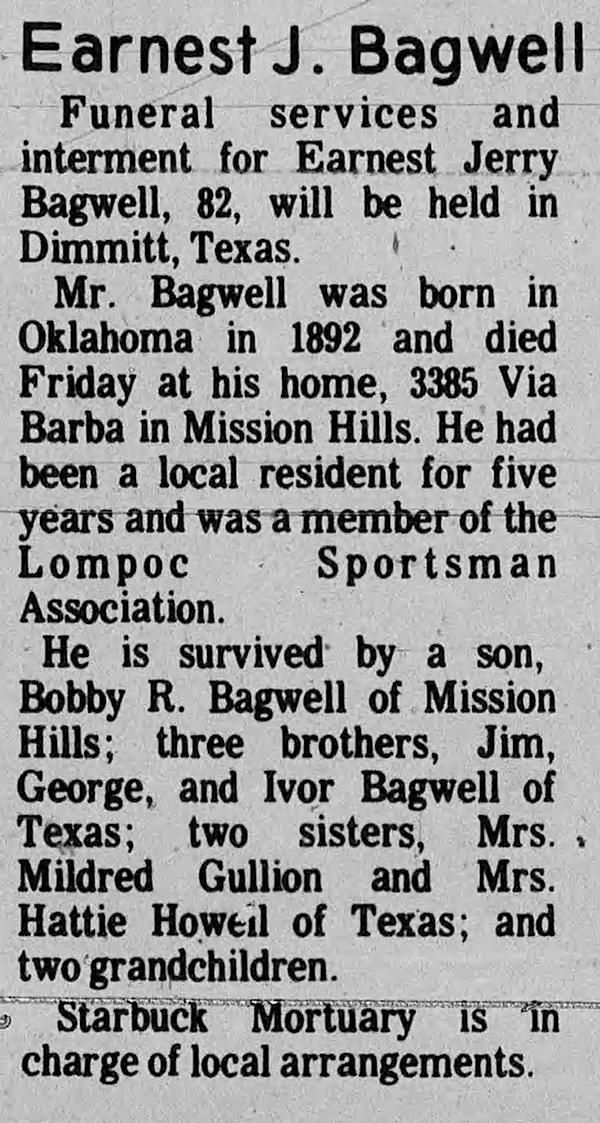 Burial followed in Castro memorial Gardens under the direction of Foskey-Flemins Funeral Home.

He died last Thursday morning in Plains Memorial Hospital after an illness.

Born in Indian Territory, Mr. Bagwell moved to Castro County in 1917. He married his wife, Robertha, on Dec. 24, 1926, in the Harmony community. She died on March 26. He was a retired farmer and rancher and was a member of the First United Methodist Church.

The family requests memorials be to a favorite charity.

F, b. 16 March 1896
Grace Margaret Bagwell was born on 16 March 1896 in Orr, Chickasaw Nation, Indian Territory (Oklahoma). She was the daughter of James Andrew Bagwell and Nancy Adaline Ashley.

M, b. January 1900
Charles Bagwell was born in January 1900 in Oklahoma. He was the son of James Andrew Bagwell and Nancy Adaline Ashley.