F, b. 26 October 1935, d. 22 December 2019
Jean Evelyn Shaffer was born on 26 October 1935 in Curwensville, Pennsylvania. As of after 1950,her married name was Bagwell. She married Lonnie Martin Bagwell, son of William Frederick Bagwell and Genia Emma Richardson, after 1950. Jean Evelyn Shaffer died on 22 December 2019 in Anderson, South Carolina, at age 84

Born October 26, 1935 in Curwensville, PA, she was a daughter of the late Harry Shaffer and Marie Norris Shaffer. Jean worked in retail as a sales supervisor for JC Penney and was a member of Boulevard Baptist Church.

In addition to her parents, she was predeceased by her son, Tim Hone and sister, Gloria Brent.

M, b. 13 February 1954, d. 21 July 2019
John Arvel Bagwell was born on 13 February 1954 in Laurens, South Carolina.1 He was the son of Maurice J. Bagwell and Mary Pearl Lyon.1 He served in the US Air Force for over 10 years. John Arvel Bagwell married Deborah Gist in November 1995. John Arvel Bagwell died on 21 July 2019 in Oklahoma City, Oklahoma, at age 65
John Arvel Bagwell went to be with his Lord and Savior on Sunday, July 21, 2019 in Oklahoma City, OK. He was born on February 13, 1954 in Laurens, SC to Maurice and Mary Pearl (Lyons) Bagwell. John grew up in Laurens community, where he graduated from high school and went on to attend Limestone College, graduating with a bachelor’s degree in Business. Upon graduating college, John went on to serve over 10 years for the United States Air Force.

John was a proud American. He loved serving his country and his fellow Americans in any way that he could. He believed in what the US flag stands for, lived in such a manner and bravely served to protect its values. Upon serving in the Air Force, John went on to work at the Laurens Walmart Distribution Center.

In 1994, John moved to Oklahoma City and began working at the Choctaw Trucking Company before becoming a Loss Prevention Supervisor for Bed Bath & Beyond, where he retired. During his time in Oklahoma City, he met Deborah Gist, and they married in November of 1995.

Above all else, John always put God and his faith first. He was a proud Christian and tried to live his life by example. John was known to be very funny and had a great sense of humor. He loved spending time with his family, especially his grandchildren. John enjoyed taking his children, Jason and Hilary, fishing and camping while they were growing up. One of his greatest joy in life was being able to share his fishing secrets with his grandchild, Keanon, and being able to take Mila fishing for her first time. John also enjoyed researching what some may consider “conspiracy theories,” and sharing his findings with his family.

John is survived by his wife, Deborah Bagwell; daughter Karissa Mills and her husband Chris; son, Jason Bagwell and his wife Angela; daughter Hilary Bagwell and grandchildren: Taryn, Keanon, Kaidence and Mila. He is preceded in death by his parents and his brother, David Rhodes.

A service celebrating the life of John will be held on Wednesday, July 24, 2019 at 3 p.m. at the Crawford Funeral Service Chapel, 610 NW 178th St. Edmond, OK 73012. There will be a reception following the service for family and friends. In lieu of flowers, memorial donations can be made out to Integris Hospice House, 13920 Quailbrook Dr. Oklahoma City, OK 73134.

Roger Wood is the son of Fred Bagwell and Violet Foster.1 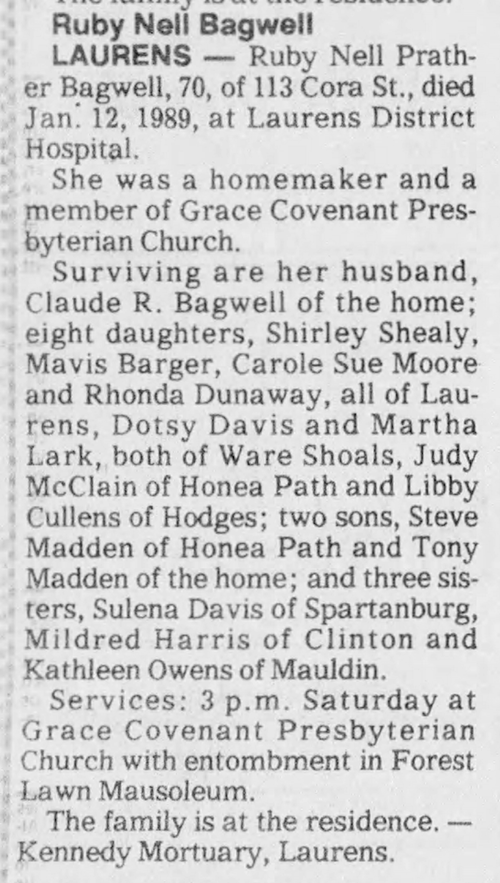 She was a homemaker and had worked as a secretary for a law firm, had done factory work and worked in the cotton mills. She was a member of the Friendship Presbyterian Church in Hickory Tavern, SC.

She was preceded in death by her parents, her husband and a brother Randy Bagwell.

Graveside services will be held at the Friendship Presbyterian Church Cemetery, Hickory Tavern, SC on Wednesday, April 12, 2017 at 1:00 p.m.1

M
Randy Bagwell is the son of Robert Bagwell.1

F
Pam Bagwell is the daughter of Robert Bagwell.1

F
Cindy Bagwell is the daughter of Robert Bagwell.1

F
Kim Bagwell is the daughter of Robert Bagwell.1