M
Jessie Bagwell is the son of James Thomas Bagwell and Pearl Oshields.

Cleo Bagwell was born on 17 December 1914 in Arkansas City, Arkansas. He was the son of James William Bagwell and Pearl Oshields. Cleo Bagwell died on 19 September 1992 in Newport, Jackson County, Arkansas, at age 77.

F, b. 26 September 1913, d. 2 April 2006
Minnie Gregory was born on 26 September 1913 in Featherston, Pittsburg County, Oklahoma.1 As of 18 April 1930,her married name was Bagwell. She married Lee Arvil "Judge" Bagwell, son of Adolphus Leroy Martin Bagwell and Pearlie Mae Logan, on 18 April 1930.2 Minnie Gregory died on 2 April 2006 in Tulsa, Tulsa County, Oklahoma, at age 92 She was the daughter of George W. and Mollie Gregory. She married Lee Arvil Bagwell in May of 1931. She operated Minnie's Arts and Crafts Store in Wilburton for many years. She was a member of the Wilburton First Assembly of God Church and a member of the local arts guild. She enjoyed cooking, serving and making quilts. She was preceded in death by her parents, George and Mollie Gregory; her husband, Lee Arvil Bagwell; a sister, Vina Myers; two brothers, Carey Gregory and Leonard Gregory, and a grandson, Billy Ray Bagwell. Services were Wednesday, April 5 with the Reb. Greg Tiffany officiating.1 She was buried at Centerpoint Cemetery, Wilburton, Latimer County, Oklahoma.1

Dewey Bagwell was born on 24 December 1905 in Mississippi. He was the son of Thomas Hape Bagwell and Mary Kathrine Gordon. Dewey Bagwell married Willie Pleasants before 1935. Dewey Bagwell died in 1997. He was buried at Forrest Memorial Park, Corinth, Alcorn County, Mississippi.

CORINTH William R. “Bill” Bagwell, 61, died Sunday, Feb. 15, 1998, at his residence. He was a member of Biggersville First Baptist Church. He was retired from Small Engine Repair Business. He was preceded in death by his son, Dan Bagwell; his father, Dewey Bagwell; his mother, Willie Pleasants.

Services will be at 2 p.m. Tuesday at the Memorial Funeral Home Chapel with the Rev. Raybon Richardson officiating. Burial will be in Forrest Memorial Park in Corinth.

Survivors include his wife, Carol Bagwell of Corinth; one sister, Martha Howell of Selmer, Tenn; one brother, David Pleasants of Saltillo; his mother-in-law, Dorothy Patterson of Corinth; several nieces and nephews.

Visitation will be from 6 until 9 p.m. today.1 He was buried at Forrest Memorial Park, Corinth, Alcorn County, Mississippi.1

Frances Merle Bagwell, 92, of Benson passed away peacefully in Benson, Arizona, on Feb. 1, 2013 after a short illness. Born on July 9, 1920, in Orosi, Calif., she was the daughter of Oliver Earl and Myrtle Belle (Hill) Ferguson. Her family moved to the Brownwood, Texas area in 1928, where she was reared. She graduated from Howard Payne University. She taught elementary school in Hatch and Lordsburg, N.M., and was a longtime teacher at Sarah Marley and Clawson Schools in Douglas, Ariz., retiring in 1983.

Frances was married to Phillip H. Bagwell from 1943 to 1960. They ranched in Salem and Rodeo, New Mexico and moved to Portal, Ariz. in 1957, where they continued ranching. (Her Valley View Ranch remains in the family today.)


They were the parents of four children: Marilyn Bagwell Hoffman, Elizabeth Bagwell Daneker (Thomas), Myrtle Bagwell Young (Charles “Red”), and Phillip E. Bagwell (Marianne). She is survived by her children and step-daughter, Emlyn Bagwell Lydford, as well as 11 grandchildren, five great-grandchildren, five step-grandchildren and four step-great-grandchildren. She also was the beloved aunt of many nieces and nephews. She is preceded in death by her parents and siblings: Raymond E. Ferguson, Frederick W. Ferguson, Maribelle Miller, Elwood H. Ferguson and Aubrey L. Ferguson.

Frances was a talented photographer (with many of her prints displayed in public offices), artist, musician and composer with several copyrighted Christian praise songs. She directed the Rodeo-Portal Youth Choir in the 1960s. She was also a gifted writer and poet, as well as an accomplished seamstress. She was known for her enthusiasm for life, her active and inquiring mind, her love for her churches (Rodeo Baptist Church and Benson Heights Baptist Church) and her devotion to family and friends. Most important was her witness to her faith; one of her last legacies was to present each grandchild with a beautifully inscribed Bible. She was a compassionate woman who was always ready to reach out to support those in need. We will remember her as a member of “The Greatest Generation”.

The family wishes to thank the staff of the Benson Hospital and TMC Hospice for their care and compassion.

Donations may be made in Frances Bagwell’s memory to either the Benson Heights Baptist Church Building Fund, designating the Youth Building, at P.O. Box 751, Benson, AZ 85602, or to Portal Fire and Rescue, P.O. Box 16331, Portal, AZ 85632, which serves the Portal community nestled at the base of “her” beloved Chiricahua Mountains.,

Services are scheduled at 4 p.m. on May 3 at the Benson Heights Baptist Church, with her ashes to be scattered at the Valley View Ranch in Portal on Saturday afternoon, May 4, 2013.

Marilyn Bagwell is the daughter of Phillip H. Bagwell and Francel Merle Ferguson.

Elizabeth Bagwell is the daughter of Phillip H. Bagwell and Francel Merle Ferguson.

Myrtle Bagwell is the daughter of Phillip H. Bagwell and Francel Merle Ferguson. 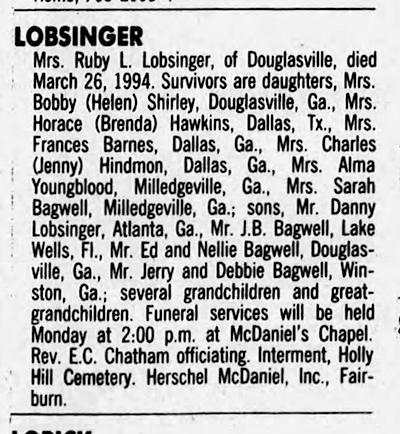 He was preceded in death by a son, Ricky Bagwell.

Visitation will take place today from 5 p.m. to 8 p.m. in the chapel of Johnson Funeral Home in Lake Wales. Funeral services will be conducted Wednesday at 1 p.m. at the First United Methodist Church of Lake Wales, with the Rev. Phillip Short officiating.

Memorials of remembrance may be made to the Florida Lions Camp, 2819 Tiger Lake Road, Lake Wales, FL 33898.

Children of J. B. Bagwell

Mr. James Edward Bagwell, 77, of Douglasville, Georgia passed away Wednesday, May 21, 2008 at Wellstar Douglas Hospital. He was born June 22, 1930 in Cobb County, Georgia the son of the late Mr. Attis Bagwell and the late Mrs. Ruby Griffith Bagwell. He married Nellie Blanche Evans on March 17, 1951 in Austell. He was a member of Union Grove Baptist Church in Lithia Springs. He owned and operated Edâ€™s Used Cars in Douglasville. He was a loving husband, father, brother, grandfather, uncle and friend. In addition to his parents he was preceded in death by his daughter, Cathy Bagwell and son, Danny Bagwell. He is survived by his wife of 57 years, Mrs. Nellie Blanche Evans Bagwell of Douglasville; daughter and son-in-law, Cindy and William Bragg of Douglasville; son, Randy Bagwell of Douglasville; sisters, Frances Barnes of Kentucky; Jenny Hindmon of Dallas, Brenda Hawkins of North Carolina, and Oneita Bagwell of Milledgeville; 4 grandchildren, Keith Bagwell, Set Bagwell, Kristy Teal, and Christopher Bragg; 2 great-grandchildren, Sidney Bagwell and Bryson Teal; several nieces and nephews. Funeral Services will be conducted Friday, May 23, 2008 at 11:00 AM from the Douglas Chapel of Jones-Wynn Funeral Home with Rev. Terry Marbut officiating. Interment will follow at Bright Star United Methodist Church Cemetery. The family will receive friends at Jones-Wynn Funeral Home, Douglas Chapel, Thursday, May 22, 2008 from 5:00 PM until 8:00 PM. Messages of condolences to the family may be sent from www.jones-wynn.com. Jones-Wynn Funeral Home, Douglas Chapel in charge of arrangements. 770-942-2311.

He was buried on 23 May 2008 at Bright Star United Methodist Cemetery, Douglasville, Douglas County, Georgia.

Mrs. Bagwell was born May 14, 1929 in Paulding County, Georgia, daughter of the late Paul Edward and Emma Elizabeth (Gulledge) Shaw. She worked as an Inspector for the Textile Industry.

In addition to her parents, Paul and Emma Shaw, she was preceded in death by her sister, Ms. Lillie Shaw and brother, Mr. Edward Shaw.

Funeral Services were held on May 2, 2006 at 2:00 PM in Benson Funeral Home Chapel with Rev. Henry Walraven officiating. A Eulogy was given by Jim Greer. Special music was provided by Mr. Tony Harris.

Benson Funeral Home was in charge of arrangement.
She was buried at Dallas Memory Gardens, Dallas, Paulding County, Georgia.