Jeanette Rankin Bagwell was born on 15 July 1917 in Wake County, North Carolina. She was the daughter of Walter Lee Bagwell and Jessie Leona Wall. As of after 1945,her married name was Wright. Jeanette Rankin Bagwell married Dr. James Rhodes Wright after 1945. Jeanette Rankin Bagwell died on 1 August 2005 at age 88 Jeannette Bagwell Wright, 88, of Brighton Gardens in Raleigh, died peacefully Monday afternoon, August 1, 2005.
Jeannette, the widow of Dr. James Rhodes Wright, M.D., was a life long resident of the Raleigh area and a faithful long time member of First Presbyterian Church, where she was active for many years in the Bettie Penick Bible Class, The Women of the Church, and Church Circle activities.
She is survived by five sons, four daughters-in-law and eight grandchildren: Dr. and Mrs. James R. Wright, Jr. of Knoxville, Tenn., and their children, Mr. and Mrs. Robert James Wright of Greenville, S.C., and Hunter Louis Wright of Atlanta, Ga; Dr. and Mrs. Walter Lee Wright of La Grange and their children, Hannah Christine Wright of Wilmington, Daniel Buchanan Wright of Richmond, Va., Mary Carolyn Wright of Winchester, Va; Mr. Richard Rankin Wright of Raleigh; Mr. and Mrs. Charles Edmund Wright and their children, Kaitlin Rhodes Wright, Ryan Blakelee Wright and Ezekiel John Wright of Raleigh; and Mr. and Mrs. Christopher Bryan Wright of Winston-Salem.
She is also survived by three sisters-in-law: Violet Wright Kilgore Tillery; Hasseltine Shipman Bagwell and Nell Fulghum Wright.
Jeannette Rankin Bagwell was born July 15, 1917, in Wake County to Walter Lee and Leona Wall Bagwell.
She graduated from Broughton High School in 1935, Peace Junior College in 1937 and Duke University in 1939.
She debuted at the Terpsichorean Ball in 1936.
At Duke, she was editor of the Student newspaper and a member of the Delta Delta Delta sorority.
During World War II, Jeannette, known affectionately to many as "Punk", worked as a teller at Wachovia Bank.
After the war, she married Dr. James Rhodes Wright of Raleigh and the couple resided at 3319 White Oak Road in Raleigh until his death in 1997.
Anyone who knew Jeannette knew that her passion was raising "the five boys" and significantly participating in the raising of many other boys.
She also helped out at "Dr. Jimmy's" office, was actively involved in community service projects with The Junior League of Raleigh, volunteer work with the Medical Auxiliary at Rex Hospital and hospitality service at First Presbyterian Church.
Over several decades, her home, and especially her kitchen, was always open to the nearly two generations of friends accumulated by her five sons. She was buried at Raleigh Memorial Park, Raleigh, Wake County, North Carolina.

M, b. 9 October 1938, d. 23 December 2016
William Bulis Bagwell Jr. was born on 9 October 1938 in Monterey, Putnam County, Tennessee. He was the son of Willie Beulas "Bulis" Bagwell and Bernie Shewmake. William Bulis Bagwell Jr. married Gail Hudgins circa 1975. William Bulis Bagwell Jr. died on 23 December 2016 in Valdese, Burke County, North Carolina, at age 78
William Bulis Bagwell, age 78, of Old Fort, passed away peacefully at the Hospice House of Burke Hospice and Palliative Care in Valdese on Friday, December 23, 2016. A native of Monterey, Tenn., he was born on October 9, 1938 to the late Bulis and Bernie Shewmake Bagwell. He was a veteran of the U. S. Navy, and upon his discharge he began work with Old Fort Finishing where he worked for more than 20 years, advancing to Quality Control Coordinator. He left there to become a co-owner with Bill Nichols of John’s Self Service grocery store in Old Fort. Following his desire to take his career into a different direction, he became a safety coordinator at the Ethan Allen plant in Old Fort where he was tasked with the management and prevention of fire hazards in the plant. His work life coincided with a devotion to community service which included a long history of volunteering in the Old Fort Fire Department where he served for a term as the Fire Chief, Assistant Chief for many years and also as Treasurer. He was also active in the Old Fort Jaycees and served as the President of the McDowell County Fireman’s Association. He enjoyed travelling, cooking and sports and formerly refereed High School basketball games prior to consolidation of the schools. Bill attended Living Waters Tabernacle for many years. He touched many lives and will be deeply missed by all who knew and loved him, especially his loving family who stayed by his side in his final days. A brother, Norman Bagwell preceded him in death.

Surviving are his beloved wife of 41 years, Gail Hudgins Bagwell; his step-mother, Elsie Bagwell Stuart of Pleasant Gardens; three children, Patrick, Ashley and Stacy Bagwell, all of Old Fort; his brother, Barry Bagwell of Mooresville; a sister, Cynthia James and husband Mickey of North Augusta; a sister-in-law, Norma Bagwell of Morganton; and several nieces and nephews.

A funeral service will be held on Tuesday, December 27, 2016 at 2:00 p.m. in the chapel of Westmoreland Funeral Service and Cremations in Old Fort with Rev. Keith Jamison and Rev. Kenneth Massingill officiating. The family will receive friends from 12:00 – 2:00 p.m. prior to the service at the funeral home. Burial, with military rites, will be on Wednesday, December 28, 2016 at 10:00 a.m. at the Western Carolina State Veterans Cemetery in Black Mountain.
He was buried at Western Carolina State Veterans Cemetery, Black Mountain, Buncombe County, North Carolina.

Mrs. Bagwell was born in Asheville and was a daughter of the late James and Mamie Havendar Kille. She was married to Leo H. Bagwell who died in 1990, and was also preceded in death by three sisters, Sarah and Charlotte Kille and Hilda Willis and by two brothers, John and Kenneth Kille.

She was a lifelong member of Trinity United Methodist Church where she served at various times as Superintendent of the Children's Department, taught Sunday School, directed the Senior Young at Heart Group and was President of the Women's Society of Christian Service. She also held positions in the District and Jurisdiction of the Women's Society. She was an accomplished seamstress and drapery maker.

She is survived by her daughter, one grandson, two great-grandchildren, a brother.

A native of Laurens, SC, he lived most of his life in Buncombe County. He was the former owner and operator of Jim Bagwell Plumbing Co. and a Member of Merrimon Avenue Baptist Church. He was a W.W.II veteran of the U.S. Marine Corp. He was a son of the late Jehu and Jennie Mae Bagwell and the husband of the late Evelyn Bagwell. He was also preceded in death by his son, Ron Bagwell and a sister, Virginia Gibson.

Funeral services will be held at 11:00 A.M. Thursday at Anders-Rice Funeral Home with the Rev. Mike Wilson officiating.

Interment will be in Ashelawn Gardens of Memory.

The family will receive friends 7 to 9:00 P.M. Wednesday at the funeral home.

Memorials may be made to: Gideons International, P.O. Box 1007, Asheville, NC 28802. He was buried at Ashelawn Gardens of Memory, Asheville, Buncombe County, North Carolina.

A native of Yancey County, she lived most of her life in Buncombe County. She was a member of Merrimon Avenue Baptist Church. She was a daughter of the late George and Rita Jane Wilson and was also preceded in death by a son, Ron Bagwell and a sister, Helen Lanning.

M, b. 24 November 1950, d. 16 December 1992
James Ronald Bagwell was born on 24 November 1950 in Buncombe County, North Carolina. He was the son of James Burton Bagwell and Evelyn Patricia Wilson. James Ronald Bagwell died on 16 December 1992 at age 42. He was buried at Ashelawn Gardens of Memory, Asheville, Buncombe County, North Carolina.

M, b. 18 October 1921, d. 2 April 2017
Marvin Howard Bagwell was born on 18 October 1921 in Buncombe County, North Carolina. He was the son of Wilton Horace Bagwell and Helen Watkins. He was a Staff Sergaent in the US Army during World War II.

The 451st BG and their B-24's moved to the Mediterranean theater, November 1943-January 1944. They were based in Italy and assigned to the 15th Air Force. Flew strategic missions to oil refineries, aircraft factories, airfields, marshalling yards and other industrial targets. They were commended three times being awarded a Distinguished Unit Citation (DUC) for missions to Regensburg 22 February 1944, Ploesti 5 April 1944 and Vienna 23 August 1944. They would be based in Italy through VE Day.1 Marvin Howard Bagwell married Henrietta Anderson on 21 January 1946 at Buncombe County, North Carolina. Marvin Howard Bagwell died on 2 April 2017 in Chandler, Buncombe County, North Carolina, at age 95.1 He was buried at Piney Mountain Methodist Cemetery, Candler, Buncombe County, North Carolina.1

A Buncombe Co. native, Mrs. Bagwell was a daughter of the late Henry Johnson and Mary Etta Israel Anderson. She was also preceded in death by an infant daughter, Sandra Carole Bagwell, and her sister, Nancy Foster.

During WWII, Mrs. Bagwell worked for the U.S. Air Force as a file clerk. She later also worked for Sluder-Adams Insurance Co., in Asheville. She was a member of Piney Mountain United Methodist Church, and of the Daughters of the American Revolution.

A funeral service for Mrs. Bagwell will be at 11:00 a.m. on Thursday at Piney Mountain United Methodist Church with the Rev. Ron Hartman officiating. Interment will follow at the church cemetery.1 She was buried on 27 October 2010 at Piney Mountain Methodist Cemetery, Candler, Buncombe County, North Carolina.1 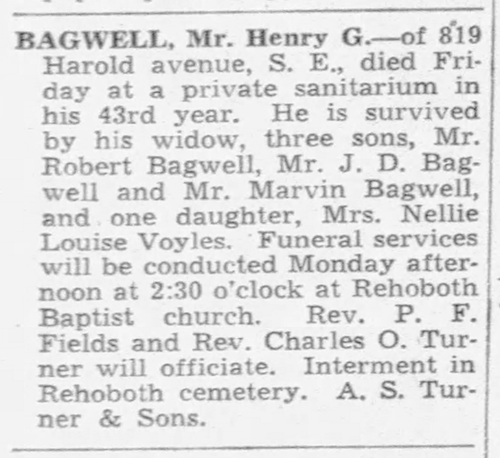