She was a homemaker and Member of Emmanuael Baptist Church in Tallapoosa.

In addition to her parents, she was also preceded in death by her husband, Raymond R. Lummus and a son, Eddie Carroll.

Lenora Bagwell was born in October 1888 in Georgia. She was the daughter of James J. Bagwell and Mae Hulda.

Julia E. Bagwell was born in January 1892 in Georgia. She was the daughter of James J. Bagwell and Mae Hulda.

Mary Sue Bagwell was born in January 1897 in Georgia. She was the daughter of James J. Bagwell and Mae Hulda.

F, b. 6 January 1923, d. 4 May 1993
Otilla Rosson was born on 6 January 1923 in Oklahoma. As of after 1950,her married name was Bagwell. She married Lawrence Lee Bagwell, son of Glenn Wilson Bagwell and Cloe Kathleen Thompson. Otilla Rosson and Lawrence Lee Bagwell lived in 1972 in Dallas, Texas. Otilla Rosson died on 4 May 1993 in Henderson County, Texas, at age 70. She was buried at Mount Olivet Cemetery, Fort Worth, Tarrant County, Texas. 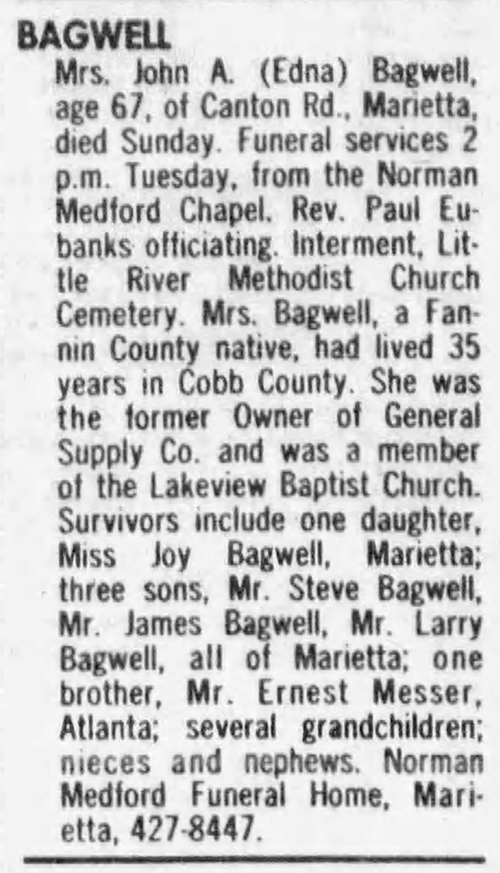 Mollie Sue Bagwell was born on 8 July 1938.1 She was the daughter of John Allen Bagwell and Edna Pearl Messer. Mollie Sue Bagwell died on 16 October 1968 at age 30.1 She was buried at Little River Methodist Church Cemetery, Woodstock, Cherokee County, Georgia.1

F, b. 17 September 1920, d. 30 May 2018
Lois C. Clements was born on 17 September 1920. As of before 1940,her married name was Bagwell. She married Ivan Eli Bagwell, son of Melvin Llary Bagwell and Esta M. Sowder, before 1940. As of 17 April 1954,her married name was Rainbolt. Lois C. Clements married Herman Raymond Rainbolt on 17 April 1954. Lois C. Clements died on 30 May 2018 at age 97
JACKSONVILLE, FLORIDA – Lois C. Rainbolt, 97, formerly of Mitchell, passed away Wednesday, May 30, in Jacksonville, Florida.
Born September 17, 1920, in Lawrence County, she was the daughter of Christopher and Daisy (Hovis) Clements. She married Herman Rainbolt April 17, 1954, and he preceded her in death on September 11, 1989.
Lois was a house mother for Delta Upsilon Fraternity at Indiana University. She was a member of the First Baptist Church in Mitchell, and had been president of the Mitchell Senior Citizens Center. She was full of life and would do anything for anyone. Family was everything to her. Lois loved to cook, dance, and laugh. Her favorite singer was Patsy Cline. She lived life like there was no tomorrow.
Survivors include her grandchildren, Amie Rainbolt, of Jacksonville, FL, Ricky Rainbolt, and Linda Sexton of Minneapolis, MI; nephew, Larry Clements of Evansville.
Her parents; sons, Steven Rainbolt, Ronald Bagwell, and Glen Rainbolt; siblings, Earl Clements, Addie Gaines, Dorothy Clements, and Albert Clements; niece, Mary Guthrie; and fiancé Kenny Dorsett preceded her in death.
Funeral service will be at 10:00 a.m. Wednesday, June 6, in the Memorial Chapel of Chastain Funeral Home & Cremation Center with Reverend Reggie Clark officiating. Burial will be in Leatherwood Cemetery.
Visitation will be from 4:00 – 7:00 p.m. Tuesday, and from 9:00 a.m. until the service Wednesday at the funeral home.
She was buried at Leatherwood Cemetery, Bedford, Lawrence County, Indiana.

M, b. 12 February 1912, d. 11 September 1989
Herman Raymond Rainbolt was born on 12 February 1912. He married Lois C. Clements on 17 April 1954. Herman Raymond Rainbolt died on 11 September 1989 at age 77
RECEIVED 23 JUNE 2013:
Herman Rainbolt, 77, of Bloomington, died Monday morning at Bloomington Hospital.
Born Feb. 12, 1912, he was the son of Glen and Verna Bell (Willliams) Rainbolt. He was the Marathon Oil Company distributor in Bloomington for 30 years 3 Survivors include his wife, Lois C. (Clements) Rainbolt; two sons, Steve Rainbolt of Bloomington and Glen "Bill" Rainbolt of Minneapolis; a sister, Mildred Eichelberger of Bloomfield; a cousin,
Rose Sims of Bloomington; four grandchildren and three great-grandchildren.
He was preceded in death by his parents, a brother, Kenneth Rainbolt; two sisters, Verna Bell Steward and Geneva Mae Johnson; and a stepson, Ronnie Bagwell.
Services will be at 11 a.m. Friday at Day Mortuary in Bloomington. Friends may call Wednesday from 6-9 p.m. at the mortuary. Burial will be in Leatherwood Cemetery in Bedford.
Memorial contributions may be sent to the Leukemia Society of America, in care of Day Mortuary.