Children of Mary Emma Helms and James B. Bagwell

Cullman Funeral Home is in charge of the arrangements.

Mrs. Smith passed away Saturday, May 1, 2010 at her residence. She was born March 19, 1925 to Jim and Mary Bagwell. She worked for more than 26 years at Golden Rod. She was a very outgoing person. She loved flowers, preserving food and taking care of her home. She was a loving grandmother and great grandmother.

She is survived by a daughter, Judy Jaudon; a brother, Troy (Betty) Bagwell; 3 grandchildren; 9 great-grandchildren; nieces, nephews, family and friends.

F
May Bagwell is the daughter of John Bagwell and Lizzie Hicks. May Bagwell married (?) Johnson after 1933.

Luther lived near Troy, Miss. until he was about 8-years-old when the family moved to California and settled in the Planada area. He graduated from Le Grand High School in 1948.

Luther served in both the Navy and the Army. He met and married his wife of over 52 years in 1957.

He was a trucker by trade. He used to say if something didn't have a gear shift or a steering wheel, he didn't know what to do with it.

Luther is survived by his widow, Kathleen, of Mariposa; a step-son, Bret Shelby of Chowchilla; a daughter, Mary Jane Mouw, also of Chowchilla; and a son, Andrew, of Oakhurst.

Born in a small agricultural community in the Central Valley to parents Don and Neva Rencher, Kathleen moved to Mariposa with husband Luther E. Bagwell around 1980. Bagwell, who passed away in 2010, worked as a truck driver for many years, transporting gravel and other rock and aggregate material across Central California.

Kathleen was active in Mariposa's St. Andrews Anglican Church congregation. She was an accomplished piano and organ player, and played organ at the church until a few years ago. She also taught piano to adults and children.

Kathleen worked in several departments for the County of Mariposa over the decades she lived in the community.

She was preceded in death by her parents, her son Andrew Bagwell, her husband and her older sister Donna Schopper—who died about a week before her. 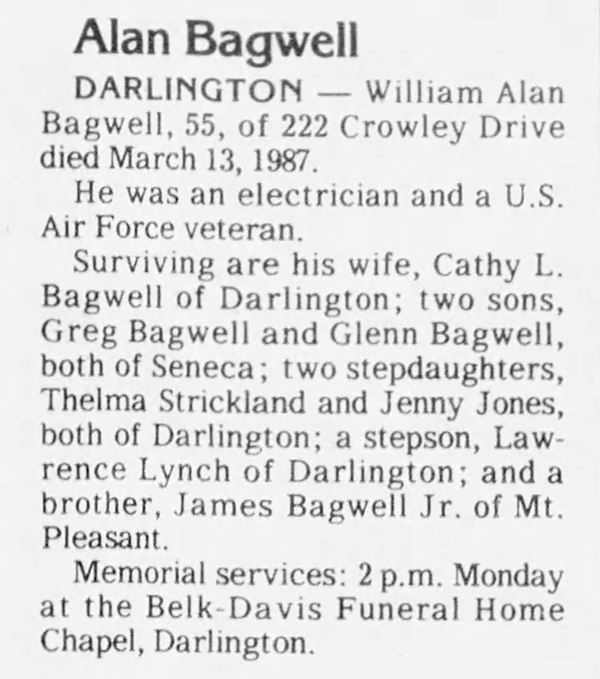