Debbie Bagwell is the daughter of James Denson Bagwell and Helen Louise Phillips.1

Ivar Jean Bagwell was born on 18 March 1945.1 She was the daughter of Carl Clarence Bagwell and Dorothy Elizabeth Evans.1 Ivar Jean Bagwell died on 13 January 1966 at age 20.1 She was buried at Arab Memorial Cemetery, Arab, Marshall County, Alabama.1

M
Michael Bagwell is the son of Joan Bagwell. 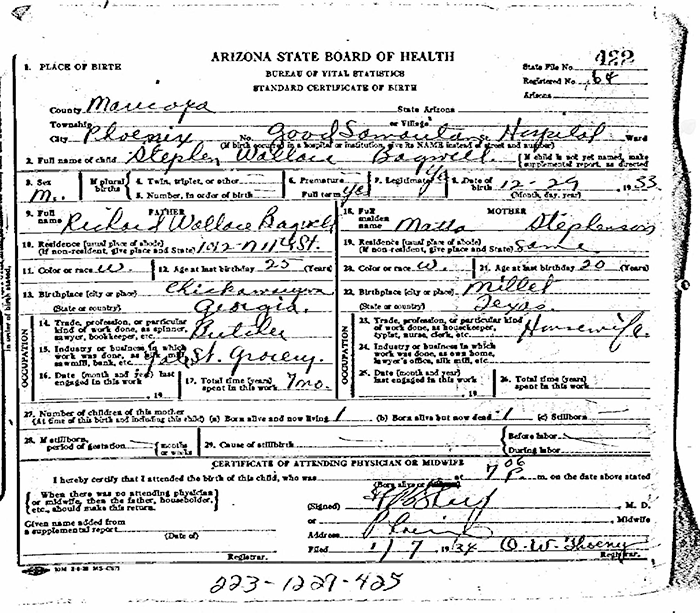 F, b. 27 January 1904, d. 6 October 1977
Rebecca Delilah Harp was born on 27 January 1904 in Berkley, Carlisle County, Kentucky.1 As of 3 May 1919,her married name was Bagwell. She married John Sylvester Bagwell, son of Joseph Bagwell and Elizabeth E. Higgins, on 3 May 1919 at Wolf Island, Kentucky. Rebecca Delilah Harp died on 6 October 1977 in Chaffee, Cape Girardeau County, Missouri, at age 73.1 She was buried at Union Park Cemetery, Chaffee, Scott County, Missouri.1

He served in the 15th Air Force. He flew 35 missions wiht the 451st Bombardment Group stationed in Italy. He received a purple heart for one of his sorties i Austria. They flew B-24 Bombers and Operated with Fifteenth AF, Jan 1944-May 1945, functioning primarily as a strategic bombardment organization. Attacked such targets as oil refineries, marshalling yards, aircraft factories, bridges, and airfields in Italy, France, Germany, Czechoslovakia, Austria, Hungary, Rumania, Bulgaria, Albania, and Greece. Received a DUC for each of three missions: to an aircraft factory at Regensburg on 25 Feb 1944, to oil refineries and marshalling yards at Ploesti on 5 Apr 1944, and to an airdrome at Vienna on 23 Aug 1944; although encountering large numbers of enemy fighters and severe antiaircraft fire during each of these missions, the group fought its way through the opposition, destroyed many interceptors, and inflicted serious damage on the assigned targets. At times the group also flew support and interdictory missions. Helped to prepare the way for and participated in the invasion of Southern France in Aug 1944. Transported supplies to troops in Italy during Sep 1944. Supported the final advances of Allied armies in northern Italy in Apr 1945. Returned to the US in Jun. Inactivated on 26 Sep 1945.1 John Sylvester Bagwell Jr. married Delcia Loraine Spivey on 1 June 1947 at Missouri. John Sylvester Bagwell Jr. died on 19 February 2002 in Phoenix, Maricopa County, Arizona, at age 79.1 He was buried at National Memorial Cemetery of Arizona, Phoenix, Maricopa County, Arizona.1

Orville H. Bagwell was also known as Arle Bagwell. He was born in 1914 in Texas.1 He was the son of William Lucious Bagwell and Annie K. Munnerlyn.1 Orville H. Bagwell died in 1927 of hemorrhage of the intestinal tract as a complication of Typhoid fever.1 He was buried at Yuma Pioneer Cemetery, Yuma, Yuma County, Arizona.1