M
Scott Bagwell is the son of Carroll Thomas Bagwell.

M
Stanley Bagwell is the son of Carroll Thomas Bagwell.


Robert A. Bagwell, also known as Bob, Bags, and Bobby, entered into eternal rest on June 15, 2021 surrounded by his family at 89 years of age.

The epitome of a true southern gentleman, Bob was a dedicated husband, loving father, and amazing Papa. He was known for his quick wit, hearty laugh, loyalty, contagious smile, and most of all, his love for family. Bob lived by his mantra of God first, family second, then everything else.

Bob was born in Clinton, SC later moving to Simpsonville, SC where he graduated from Simpsonville High School in 1950. Following high school, Bob joined the South Carolina National Guard and United States Air Force. After three years of service to our country, he was honorably discharged and began his career with Dillard Paper Company. While working, Bob earned degrees from North Greenville College as well as Furman University.

Throughout his years at Dillard, Bob mentored many and became close friends with numerous customers. After 48 years of dedicated employment, Bob retired in 2001.

Bob was predeceased by his parents, Hoyt and Nellie Bagwell; brothers, Carol and Jimmy Bagwell; a son, Jason Watson; and his first wife, Carolyn M. Bagwell.

Burial in the Simpsonville City Cemetery.

Children of Robert A. Bagwell and Judy (?)

Fountain Inn - Wilton Hoyt "Mickey" Bagwell, 83, widower of Peggy Poole Bagwell, went to be with the Lord on Monday, December 6, 2021.

Mickey was born in Simpsonville to the late Thomas Hoyt Bagwell and Nellie Abercrombie Bagwell. Mickey was an avid New York Yankee's fan. One of his proudest moments was meeting Mickey Mantle (hence his nick-name sake), and Roger Maris. He was a walking Almanac for all things baseball and Yankee's. Mickey was a member of Wrenn Baptist Church where he and Peggy volunteered their time during AWANAS. He also was a soloist and sang in the choir.

A Celebration of Mickey's Life will be 3 o'clock Sunday at Wrenn Baptist Church. The family will receive friends an hour prior. Burial Will follow in Simpsonville Municipal Cemetery.

Published in The Greenville News.


He was buried on 12 December 2021 at Simpsonville Municipal Cemetery, Simpsonville, South Carolina. 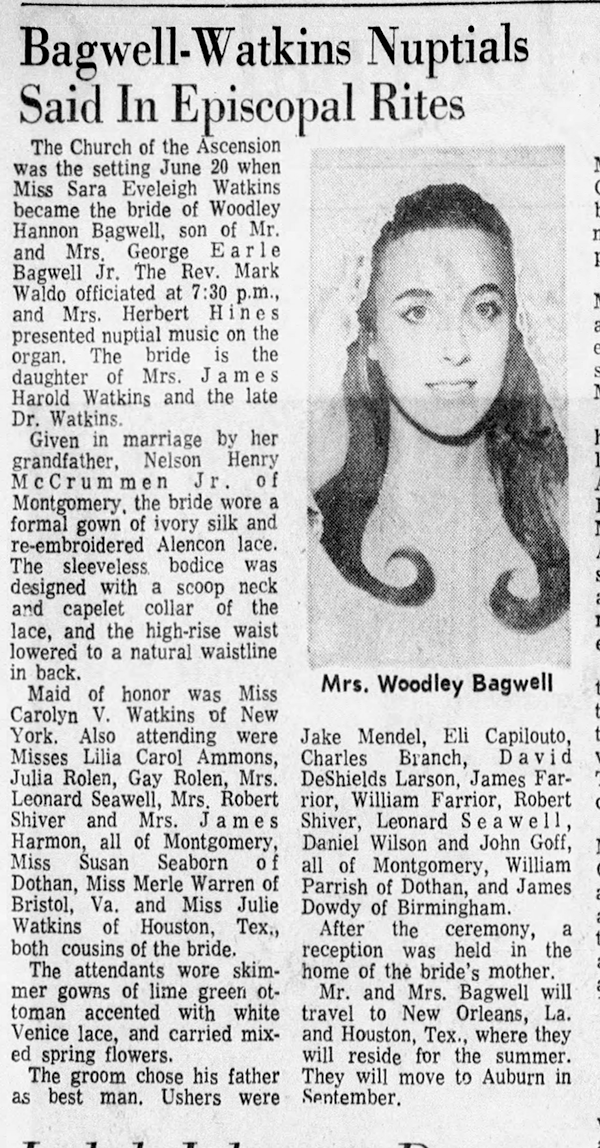 Child of Bambi Bagwell and (?) Eldridge

F, b. circa 1883
Ola Chastain was also known as Ola Goodwin. She was born circa 1883 in Georgia. As of 18 December 1911,her married name was Bagwell. She married Daniel Lee Bagwell, son of Giles Lafayette Bagwell and Sara Isabelle Morgan, on 18 December 1911 at Hart County, Georgia.

Child of (?) Eldridge and Bambi Bagwell

M
Chance Eldridge is the son of (?) Eldridge and Bambi Bagwell.